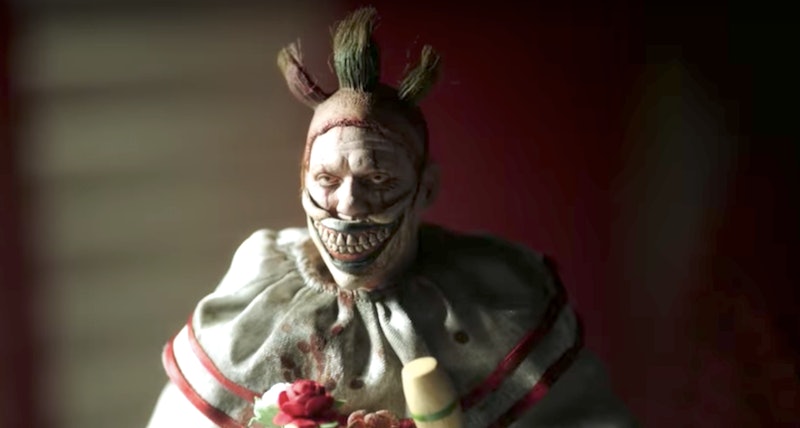 The name may already be taken, but there is an insane clown posse wreaking havoc on this new installment of American Horror Story: Cult. But are the clowns in AHS: Cult real? As shown in the premiere episode "Election Night" (spoilers ahead), Sarah Paulson's character Ally Mayfair-Richards has coulrophobia, an irrational fear of clowns. Her partly conquered anxieties rear up again after Donald Trump is elected president, but it's really her son reading a Twisty The Clown comic that brings back her clown fear.

Ally sees a pack of sadistic clowns in the grocery store and another one at the restaurant that she owns with her wife Ivy. While the clowns seem to be Ally's hallucinations, there's a chance that there really is a group of physical clowns terrorizing this Michigan town, specifically Paulson's character. And with the premiere episode of Cult ending with Ally and Ivy's son Oz seeing clowns too, the clown conspiracy is on.

Ally certainly has delusions, but this is American Horror Story, so there's no way you can disregard her visions. And though phobias can run in the family, as Psychology Today reports, Oz's clown visions seem to confirm there really is a pack of murdering clowns holding this town hostage. Sure, Chaz Bono's grocery store cashier character says the killer clowns in the supermarket didn't exist and Billie Lourd's Winter says the clowns killing the Mayfair-Richards' neighbors, the Changs, is a figment of Oz's imagination, but there's no way that these characters are to be trusted. After all, Winter makes a pinkie pact with Evan Peters' Kai, and Bono's Gary Longstreet is a proud Trump supporter.

Oz and Ally are the only ones who are shown seeing these carnival freaks so far, but this murdering cult of clowns most likely exists — in the world of the show, that is. And these clowns may very well be led by Kai since he threatens City Councilman Chang when he says there's nothing more dangerous than a humiliated man and Chang and his wife end up dead (presumably) at the hands of the clowns. So while Ally and Oz most certainly are paranoid, that doesn't make their fears any less valid, and you should expect more AHS killer clowns where the first bunch came from.