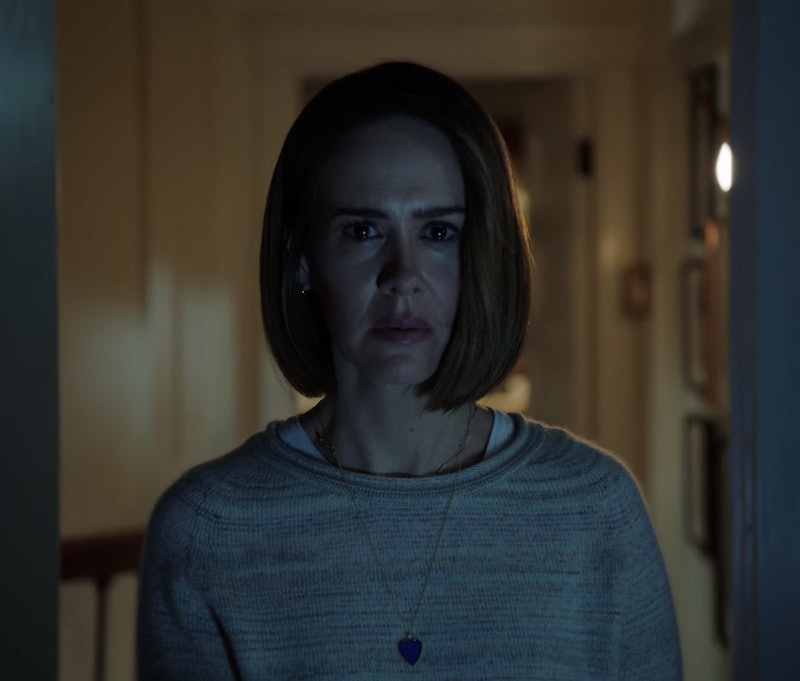 Clowns, bees, a blue-haired, Donald Trump-supporting Evan Peters — the lead up to American Horror Story: Cult hasn't been as cryptic as last season's AHS: Roanoke installment, but it's still been a weird ride. You would be forgiven for still being unsure about what this season's story will be about even after watching the trailer and opening credits. It's clear that politics will play a role in fueling the horror for series creator Ryan Murphy's latest batch of characters, but that's far from the whole story. With the Sept. 5 premiere date right around the corner, now is the time to examine everything you need to know about AHS: Cult.

Thankfully, according to The Hollywood Reporter, Murphy and FX CEO John Landgraf answered many of the most pressing questions surrounding the new season during a screening session on Friday. Among the most interesting tidbits were the reveal of Lena Dunham's character, a hint about what's up with the bee imagery, and how the current political climate will inform the story. Deadline reported Murphy said, "No matter if you're Democrat or Republican, everyone is still losing their sh*t." More than anything else, AHS: Cult will be about a charismatic leader who rises up to take advantage of this chaotic period in American history. Read on to discover exactly what that means for the season ahead.

Season 7 Was Always Going To Be About Cults

Murphy revealed that he's always wanted to do a season of AHS devoted to cults. According to Deadline, Murphy has to have his idea for the new season solidified by October, and he had decided that no matter who won the election, the divisive nature of the country made now the right time to tackle the topic.

This season is going to be huge for Peters. The AHS regular will play a grand total of five different characters across the season, all of them cult leaders. In the present day, he'll play the fictional Kai, who wants to see the world burn post-election. Peters will also play real life cult leaders Manson, David Koresh, Andy Warhol, and Jim Jones, according to TVLine.

The Season Begins On Election Night 2016

As promised, the first episode of the 11-episode season will begin in Michigan, on election night, in November 2016. The moment Trump wins will serve as a catalyst for both the clown-fearing democrat Ally Mayfair-Richards, played by Sarah Paulson, and cult leader Kai's next moves.

AHS: Cult Is Not About Donald Trump

Both Trump and Hillary Clinton appear in the opening credits via creepy rubber masks, but they are simply symbols of a troubled time. Cults have a tendency to gain traction during times of discord, and that's what Murphy hopes to explore this season. "It’s not about Trump and Clinton (this season)," Murphy said, according to Deadline. "It's about somebody who put their finger up to the wind and rose up in power and used people's vulnerabilities, and they feel the world is on fire."

Girls' creator and star Dunham is taking on the role of the woman who shot Warhol. You can expect to see her in episode seven, "Valerie Solanas Died For Your Sins, Scum Bag." As a whole, the episode will tackle the subject of female rage both in the past and the modern day.

Additionally, Emma Roberts will appear in one episode as Serina Belinda, a reporter who gets a promotion over Adina Porter's character thanks to her superficiality.

There's Nothing Supernatural In Season 7

For the first time ever, a season of AHS will not include anything supernatural. All of the horror comes from normal people and their fears.

John Carroll Lynch Will Reprise The Role Of Twisty The Clown

Variety confirms Lynch will reprise his role as Twisty from AHS: Freak Show. It seems that since his death, the clown has become famous enough to be featured in his own comic book series. This will no doubt freak out the coulrophobic Ally.

Billy Eichner's Character Is Responsible For The Bees

According to Entertainment Weekly, Eichner will play a suburban beekeeper, which at least partially explains all of the bee imagery in the promotional materials. Murphy also reportedly said, "Bees are the original cult."

One thing is certain, AHS: Cult is going to take the franchise to an entirely different place. Whether viewers are ready for so many scares grounded in reality is a question for another day.