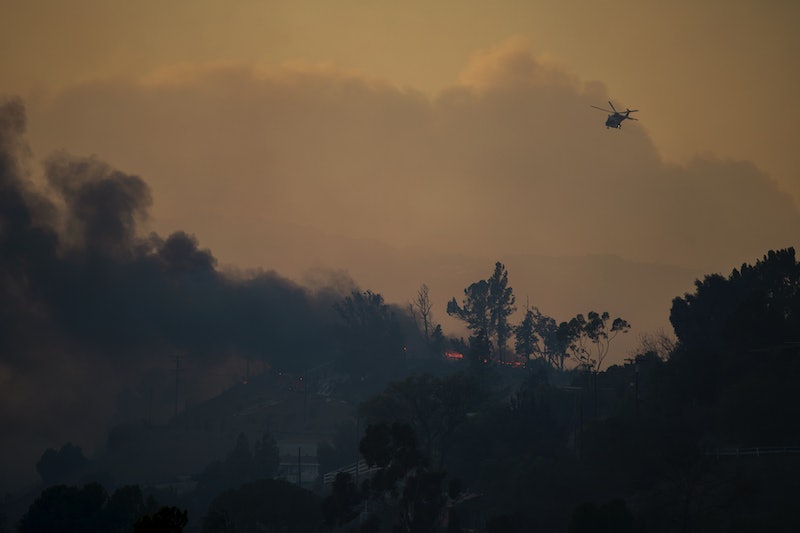 During the fires that struck Northern California earlier this year, more than 100 flights were canceled at San Francisco International Airport and still more were delayed. Considering the impact previous wildfires have had, many are wondering if the Southern California fires will affect flights as the busy December travel season begins.

Earlier this week, California Gov. Jerry Brown declared a state of emergency as multiple wildfires spread across Los Angeles, Ventura, Santa Paula, San Bernardino, Ojai, and neighboring cities. As of Wednesday evening, the Thomas Fire in Ventura was the biggest and fastest-spreading fire and was only 5 percent contained by firefighters.

One of the region's major freeways, the 405, has faced closures due to the wildfires. Due to the nature of Southern California's mountain ranges and the intense Santa Ana winds, the wildfires were able to spread rapidly, and they jumped multiple highways to get to the Pacific Ocean. However, although numerous freeway closures are significantly affecting LAX-bound traffic, the airport itself is not facing any major flight delays at this time.

Many Twitter users have been asking whether their flights are likely to be canceled, but it appears that at least for the moment, flights have not been affected by the fires. The LAX Twitter account reported delays along the Van Nuys-LAX shuttle route on Wednesday due to the fires, but subsequently sent out an update on Thursday to assure travelers that traffic was back to normal.

Delta Airlines, meanwhile, confirmed to one Twitter user that the fires haven't impacted its flights yet.

American Airlines also assured a customer that despite the Santa Ana winds, the fires had not yet impacted their flights.

Scandinavian Airlines, meanwhile, did not offer any information about potential flight cancelations or delays. But the airline's Twitter account did inform a passenger that they would be notified via text message of any changes or cancelations.

As of Wednesday, Southwest Airlines did not have any plans to cancel or delay flights leaving from LAX.

The airline's Twitter account did suggest, however, that a travel advisory may be issued in order to help its customers better plan their travel to and from the region.

The airline seems to be handling more specific inquiries about flights to Southern California on a case-by-case basis, as this tweet illustrates:

Travelers should really be more concerned about getting to LAX than off the ground. As many Twitter users indicated, fires were burning right next to the 405 Freeway, which was what initially resulted in lane closures.

One Twitter user sent a worried tweet to JetBlue, explaining that she had no way of getting to the airport. It is unclear precisely how JetBlue resolved this problem, but the Twitter user soon thanked the airline for helping her out.

It seems that Twitter is a great way to get ahold of airlines if you're having any trouble getting past the fires in Southern California in order to make your flight.

However, not everyone is satisfied with airlines' policies regarding the fires. Even though flights themselves have not been impacted, one Twitter user worried about the risks travelers were taking in order to get to LAX and make their flights.

Although flights don't seem to be facing major delays, passengers on flights departing from and arriving at LAX will be able to see just how widespread the fires in Southern California are.

If you have a flight leaving from, going to, or passing through LAX, make sure to check your flight status before leaving for the airport. Even if there are no reported flight delays or cancelations yet, multiple airlines have indicated on Twitter that they will issue travel advisories if necessary.

If you are in Southern California and need to get to the airport, be aware of any freeway closures that might force you to reroute, and make sure to track the fires in case they're close to where you need to go.