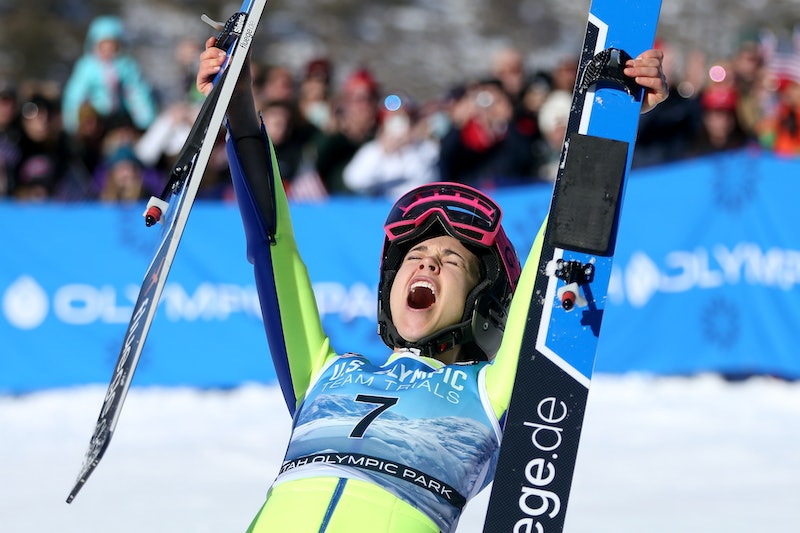 On Feb. 9, athletes will gather in PyeongChang, South Korea for the 2018 Olympic Winter Games. If you're wondering if men and women have different Olympic dress code, the answer is complicated. When it comes to individual sports, there are some major differences between genders, but for the winter event, most sports are simply about being as warm as possible.

With 102 events and 15 sports, it can be hard to keep track of all the Olympic rules. When it comes to the dress code, things are a little different with the winter versus summer events. Because, well, when it's extremely cold. In fact, according to TIME Magazine, the PyeongChang Olympics has the potential to be the coldest on record at 7 degrees Fahrenheit.

It's going to be so cold that the U.S. team will actually be wearing heated jackets during the Olympic Opening Ceremony. The men's and women's outfits were designed by Ralph Lauren and will be the same, regardless of gender.

As far as the actual events, there are some differences in what men and women wear. The sport with the most dress rules is figure skating. Ice dancing and figure skating have gender-specific rules, stating that the men must wear full-length trousers and no tights and women must wear skirts to perform.

"At ISU Championships, the Olympic Winter Games and International Competitions, the clothing of the Competitors must be modest, dignified and appropriate for athletic competition — not garish or theatrical in design," Rule 501 in the ISU Special Regulations & Technical Rules Handbook says. "The clothing must not give the effect of excessive nudity inappropriate for the discipline. Men must wear full length trousers and must not wear tights. In addition, in Ice Dance, ladies must wear a skirt."

The current rules went into effect after an Olympian's buttocks was exposed during competition. Olympians must now wears skirts, albeit short ones, to avoid this from happening. The rule states that too much nudity will result in a penalty.

The only other indoor sports in the Winter Olympics are luge, bobsleigh, skeleton, and ice hockey. None of the other sports show as much skin as figure and ice skating, and don't require gender specific rules, aside from wearing the proper safety items.

While there's not a specific guideline for men and women in the Olympic Village, there are some rules on logos during events. According to Rule 50 in the Information Kit For Athletes, the athletes are not allowed to wear any branded gear or products during the games.

"A number of rules are in place for athletes regarding the use of identifications (such as trademarks) on clothing, accessories and equipment during the Olympic Games. Rule 50 exists in particular to keep the focus on sport and the athletes, and to ensure that all competition venues and other Olympic venues and sites remain free from advertising, publicity, demonstrations and political, religious and racial propaganda," it says in the PyeongChang Olympic guidelines.

Because of the cold weather, there aren't an exorbitant amount of fashion rules to follow in the Winter Olympics. The main thing is keeping the athletes warm at all times. As you can probably imagine, more rules are put in place for the Summer Olympics, when the athletes are trying to stay as cool as possible.

The heated jackets are just the beginning of the innovative ways to keep the athletes warm — at least during the Opening Ceremony. There will undoubtedly be tons of winter jackets, boots, and warm weather accessories to do the trick.