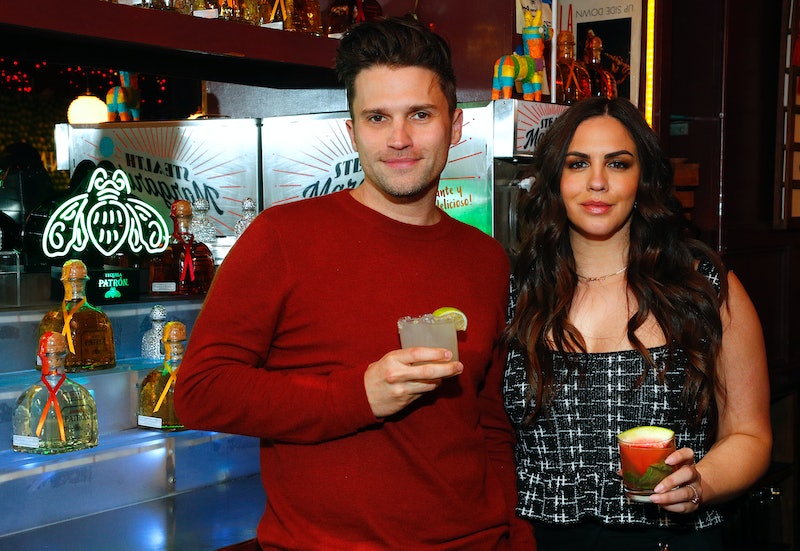 Vanderpump Rules has been building up to Jax and Brittany's wedding all season, but right before the big day, a wedding that already happened stole their thunder. As their fellow castmates discovered on the March 10 episode, Tom Schwartz and Katie apparently failed to get legally married. Katie (very misguidedly) left Schwartz in charge of handling their marriage license, and (shocker!!) he managed to lose it. "It's a piece of paper. I didn't understand the importance of it," Schwartz explained to the cameras.

Of course, Jax finding out that he's technically the first guy in the group to get married gave him a huge ego boost. In his confessional, he started giving an awards show speech thanking everyone for making it happen. "I really expect to be the number one guy in this group for a very long time now," he concluded. Considering everyone on the show has, well, met him, that seems unlikely. But dare to dream, Jax!

In any event, Schwartz and Katie did eventually get legally married. Schwartz casually mentioned on the show that they might elope in Las Vegas, and it turns out that they followed through with it. The couple signed their marriage certificate in Las Vegas after having a small second ceremony at Caesars Palace attended by the rest of the Vanderpump gang — minus Kristen, apparently. Stassi, Beau, Jax, Brittany, Sandoval, Ariana, and Lala all shared footage on Instagram, as reported by E!, and it looked as cheesy and ridiculous as you'd hope for a Vegas wedding. They even had a "Congratulations! Again!" cake.

More like this
Nicole & Chris Hinted They’re Still Together After 'Married At First Sight'
By Brad Witter
The Bachelor’s Christina Mandrell Comes From One Of Country Music’s Most Famous Families
By Brad Witter
Kylie Jenner Clarified How To Pronounce Her Son's New Name
By Jake Viswanath
Jin-young Reflected On His Relationship With Seul-ki After 'Single’s Inferno'
By Brad Witter
Get Even More From Bustle — Sign Up For The Newsletter
From hair trends to relationship advice, our daily newsletter has everything you need to sound like a person who’s on TikTok, even if you aren’t.