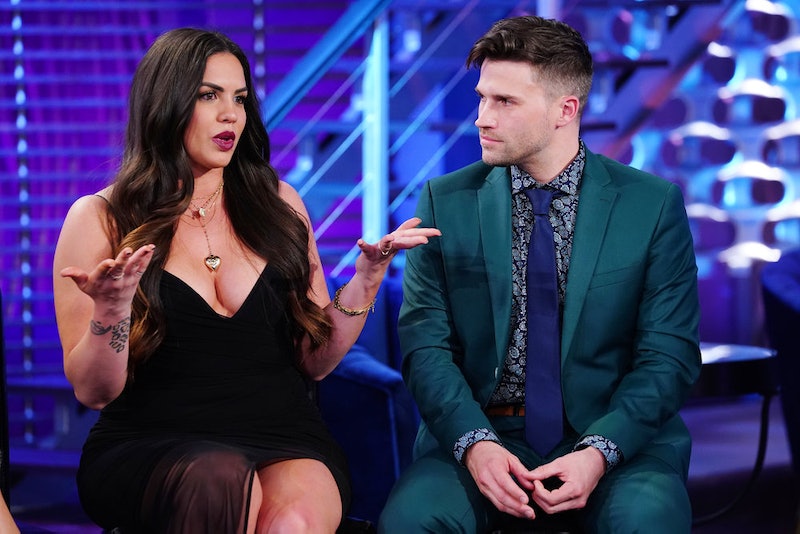 Vanderpump Rules fans will remember when Katie Maloney and Tom Schwartz tied the knot in August 2016 in front of friends, family, and viewers at home. However, that might not actually be the full story. In a recent podcast interview, Lance Bass claimed Schwartz and Katie are not legally married. Wait, what?

This sounds so absurd and the Lance Bass connection may initially seem a bit random, but he's actually a Vanderpump Rules insider. He has a close relationship with Lisa Vanderpump. He's a business partner with Jax Taylor for their line of mixers called Just Add X. And, getting back to the topic at hand, Bass officiated Jax and Brittany Cartwright's Kentucky wedding this past June.

The former boy-bander has had a lot of Vanderpump Rules interactions lately, which means he probably witnessed some Season 8 storylines, even though they're still filming. According to Us Weekly, Bass spilled some piping hot tea on an episode of the Reality Bytes podcast. He recalled signing the marriage license for Jax and Brittany at 2 in the morning while his Uber waited for him and his phone battery was on 1%. Talk about a high-pressure situation, but that wasn't even the shocking part of his story.

Bass concluded, "So, yeah, I hope that [Jax and Brittany] are married because we just found out that Tom and Katie are not married." (Bustle reached out to Katie and Schwartz's rep for comment, but did not receive an immediate response.)

Then, he divulged, "They did not send in their materials right. So, they are not married." How is that even possible? If that's actually true, what took them so long to find out? Did they find out while the cameras were rolling? Let's hope so. This sounds like such an intriguing storyline.

The *NSYNC alum hinted, "I think that might be a little storyline, yeah." Wow. That's a unique storyline, for sure. Calling it now that Katie and Schwartz will have a vow renewal ceremony at some point to rectify this mistake if they really aren't married.

At this point, neither Schwartz nor Katie (or anyone else in the Vanderpump Rules cast) has commented on Bass' revelation. However, that does make sense since they're usually tight-lipped about storylines. If they really aren't married, let's hope that they find the snafu to be a humorous anecdote. Otherwise, it sounds like it could be a major setback for the couple.

This couple went through so much before they got married. Katie made it clear that she wanted to get engaged for a long time. During Season 3, Tom gave Katie a dog to buy time before purchasing a ring. That same season, Schwartz admitted to cheating on his then-girlfriend during a boys' trip in Las Vegas.

At fellow cast member Scheana Marie's wedding, Katie thought Schwartz might be proposing. (Thankfully, he didn't because that would have been tacky to get engaged at someone else's wedding.) However, he still managed to upset her by giving her a ring on a string instead of an engagement ring.

Later on, Schwartz tried to demonstrate his love for Katie by getting her nickname, "Bubba," tattooed on his butt in Season 4. Needless to say, she was not super impressed by that gesture. However, he did finally come through with what she wanted during the very next episode: an engagement ring.

Season 5 was all about the couple's wedding planning and wedding planning-induced arguments. They went at it during their joint bachelor/bachelorette party in New Orleans, but they got it together eventually with Lisa Vanderpump officiating their wedding during the Season 5 finale.

After all of that, it's shocking that might not actually be married. The fans need clarification on this ASAP.

More like this
Erika Jayne's Estranged Husband Tom Girardi Has Been Indicted On Fraud Charges
By Jake Viswanath
Everything To Know About 'RHOSLC' Season 4
By Jake Viswanath
'RHOSLC’s Heather & Whitney Are Still On A “Friendship Break” After Season 3 Reunion
By Jake Viswanath
RHOP’s Robyn Dixon Explained Why Juan Paid For Another Woman's Hotel Room
By Brad Witter
Get Even More From Bustle — Sign Up For The Newsletter
From hair trends to relationship advice, our daily newsletter has everything you need to sound like a person who’s on TikTok, even if you aren’t.