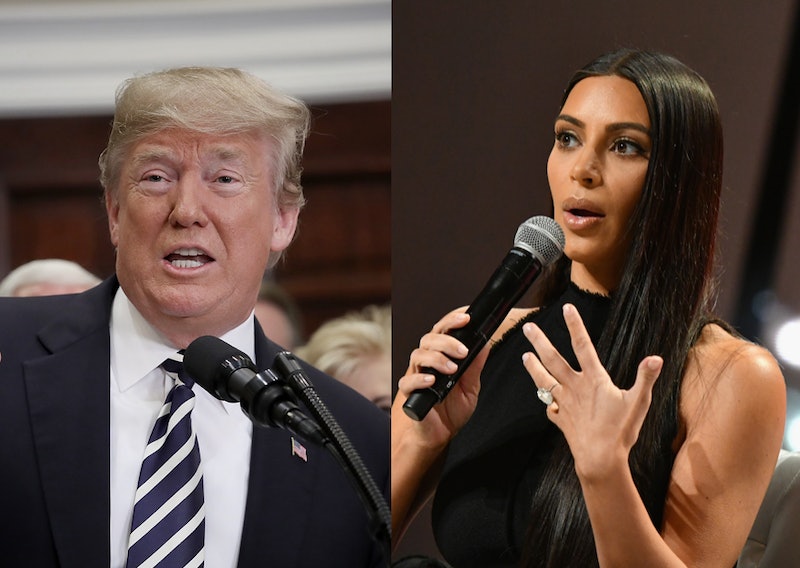 On Wednesday afternoon, President Trump gained a potential new friend: Kim Kardashian West. The two individuals met at the White House to discuss the fate of Alice Johnson, a 63 year old woman who was sentenced to life in prison in 1996 for a first-time drug conviction. Though the outcome of this meeting is not yet clear, they did both tweet their thanks to the other and speak positively of the meeting. All of this begs the question, are Donald Trump and Kardashian West actually friends?

The simple answer is probably not. But they also don't seem to be enemies, either, and might just have a friendly working relationship.

Of the meeting, Trump tweeted, "Great meeting with Kim Kardashian today, talked about prison reform and sentencing." He also attached a photo, in which both individuals were seen striking their signature poses. Kushner was not in the photograph.

Kardashian West tweeted something similar, first noting that today was actually Johnson's birthday, then adding in a subsequent tweet, "I would like to thank President Trump for his time this afternoon. It is our hope that the President will grant clemency to Ms. Alice Marie Johnson who is serving a life sentence for a first-time, non-violent drug offense."

Though Kardashian West tweeted later that she was optimistic about Johnson's future chance at a "second life," there's no word as to what actually transpired in the meeting. What's equally unclear is how Kardashian West actually feels about Trump, especially given her husband's recent declaration of support for the president.

Prior to Kanye West's string of controversial tweets in which he declared his support for Trump (and even went so far as to tweet a picture of himself wearing a MAGA hat), Kardashian West had had no direct political involvement with Trump's presidency, nor his campaign. Though Kardashian West reportedly considered Trump's candidacy as a favor to Caitlyn Jenner, she ultimately publicly endorsed Hillary Clinton's presidential run, explaining her decision in a piece written on her website.

I found that without a doubt, I stand with Hillary. I'm with her. I believe Hillary will best represent our country and is the most qualified for the job. This year, I'm not just voting for myself, but also for my children, and I took that into careful consideration when I made my decision.

"When [Kanye] spoke out about Trump... Most people (including myself) have very different feelings [and] opinions about this," Kardashian West tweeted. She added, "But this is HIS opinion. I believe in people being able to have their own opinions, even if really different from mine He never said he agrees with his politics."

Given Kardashian West's repeated assertions that she and her husband hold different political beliefs, as well as her public endorsement of Clinton, it seems unlikely that Kardashian West and Trump will be best friends any time soon. But Kardashian West has proven herself time and time again to be an incredibly shrewd and successful businesswoman, so it's no surprise that she would meet with President Trump in order to achieve the end goal of pardoning Johnson, regardless of how she views him.