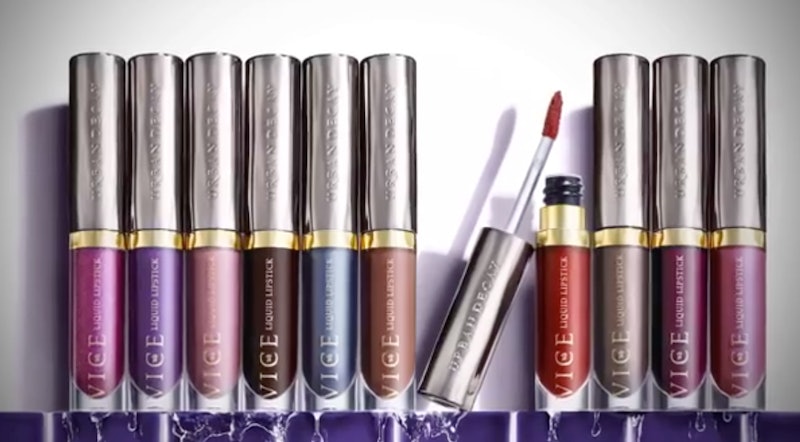 Liquid lipsticks will remain dominant in 2017. Urban Decay has created 30 Vice Liquid Lipsticks. The UD crew is following up 2016's maj lipstick reboot, in which the brand re-launched its entire lipstick range with 100 shades. News of the UD liquid lippies comes hot on the heels of the announcement that Kat Von D is launching 25 new Everlasting Liquid Lipstick hues, which have staggered release dates and locations.

Statement lips aren't fading in 2017, courtesy of UD and KVD. However, since matte liquid lippies were huge — Hi, Kylie Lip Kits!— and velvety and precise power pouts were all the rage in 2016, I am left with this pertinent question. Are the Urban Decay Vice Liquid Lipsticks matte?

That pretty much translates into comfortable, non-drying wear and a bit of sheen, respectively.

Also, the Vice liquid lippies are lifeproof — they are kissproof and waterproof, so they won't budge, end up on drinking glasses or your partner's pout after a smooch, or demand constant reapplying.

Observe Vice Liquid Lipsticks aka your latest obsession, presented by Urban Decay. OMG! I am seriously #Obsessed. It's going to be a liplicious 2017!

Here's everything we know so far about the Vice liquid lippies. The exact launch date, retail locations, and pricing have not been confirmed as of press time.

That pigmentation, though. I am already feeling pangs of desire for the third lippie from the right. Are any or all of these hues speaking to you?

Nice work, Urban Decay. The year is just four days old and you've already hit me with a #ByeMoney moment.

Here is the brand's official description of its lipstick textures from its site, FYI.