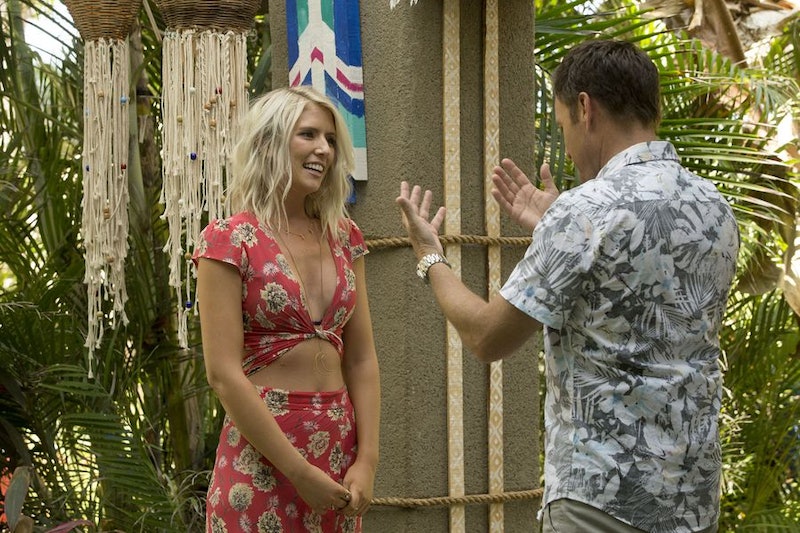 Last summer, Nashville residents Evan Bass and Carly Waddell found love on Bachelor in Paradise. This season, another Nashville love connection could definitely be possible. Fans are hoping that Wells and Danielle M. are dating after Bachelor in Paradise. Neither of them have publicly said whether or not they found love in Mexico yet, but it's only the second week of the season. Danielle M. and Wells have a friendship that goes way back — to Nashville. Could it become something more?

Wells arrived on the show last week, but not as a contestant — he's the new bartender, replacing Jorge. Bachelor alums are a pretty tight knit group and it seems that Danielle M. and Wells became friends in their shared home city and were friends way before Bachelor in Paradise. But could these two good friends find a romantic spark this season? While on Bustle's Bachelor podcast, Will You Accept This Podcast?, Wells hinted that he may get involved in some of the relationship drama, even while he's stationed behind the bar. "You also have to remember — if I go on dates, does that mean I don't get to be the bartender anymore?" he said. "Would you think that I would forfeit the cool gig that I've got to go on dates? Maybe so. And if I did, who would be the one to pull me out from behind the bar?"

Intriguing. Perhaps Danielle was the special someone to get Wells on a date. While that is yet to be seen on Bachelor in Paradise, it's clear from their social media accounts that they interact very often. Throughout the summer, Wells and Danielle have made cute cameos in each others' Instagram photos and Twitter feeds. The above Boomerang was tagged at Nashville Studios and posted on July 28 — which is after Bachelor in Paradise finished filming in early July (according to The Hollywood Reporter).

On Aug. 22, Danielle is hosting a Bachelor in Paradise watch party in Nashville to benefit the Lwala Community Alliance — and Wells is scheduled to appear, as well as cast members Dean Unglert, Kristina Schulman, Derek Peth, and Taylor Nolan. Sure, Wells could be there, because he lives in Nashville, but he's very enthusiastic about supporting her event. "If you don't come to this, I won't be your friend anymore," Wells playfully wrote on Twitter in a retweet of Danielle's initial post on Aug. 15.

Even before Paradise, Wells dedicated a sweet Instagram post to Danielle and her work as a neonatal nurse for International Nurses Day on May 28. "She works extremely long hours giving babies a fighting chance at life," he wrote in the photo's caption. "Danny is a hero and don't you forget it! Oh, here's a pic of us drunk in a bathtub wearing our favorite hats."

They've even matched outfits before, as evidenced by Danielle's Instagram post to celebrate Wells' birthday on May 16. She posted a photo of herself and Wells wearing the same beanie hat, and flannel shirt. "Happy Birthday to the best flannel wearing, beanie headed, taco eating, puppy saving, balderdash playing friend a girl can have!" she wrote in the caption.

Fast forward to now: Danielle has been live-tweeting Bachelor in Paradise episodes. She retweeted Evan Bass' tweet calling Wells, "the best guy on the planet," and Danielle also had messages of her own for Wells.

It's clear that these two are close and super cute together. Bachelor in Paradise may have another match made in Nashville.