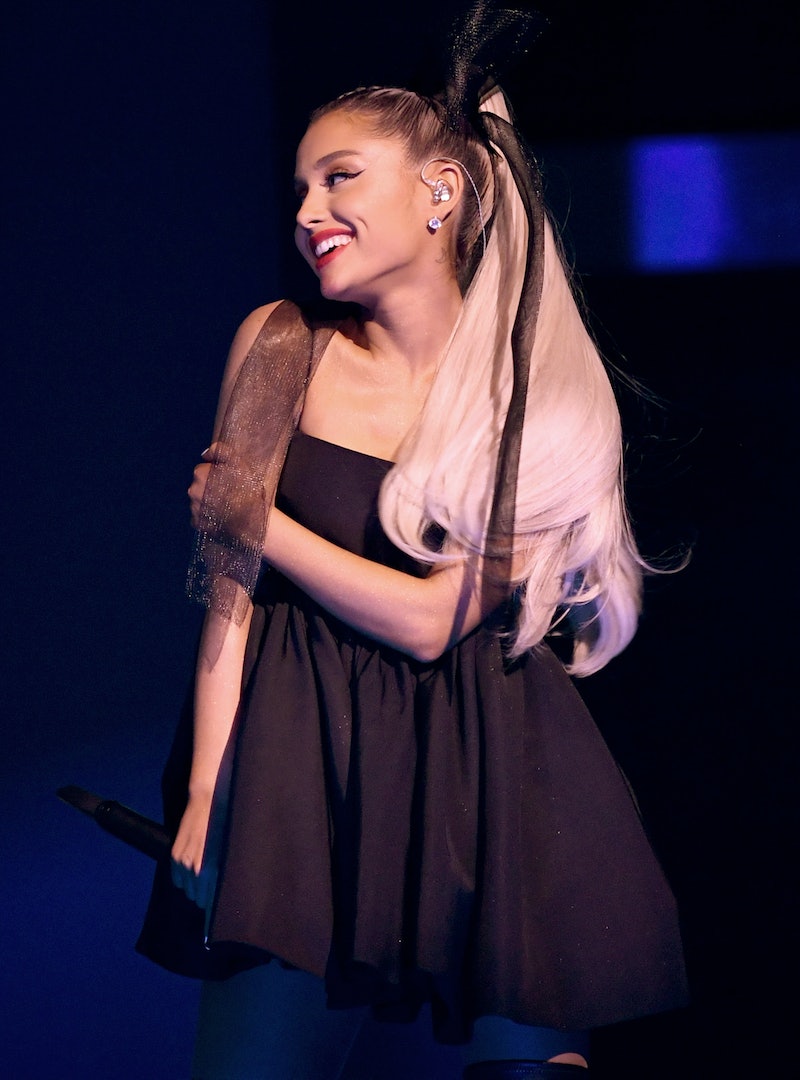 The tattoo is placed behind her ear, and it's a minimalist design about the size of a finger nail, where its wings form the outline of a heart. She shared a black and white photo of it on her Instagram, with the caption "forever," accompanied by a cloud emoji, which could symbolize the victims who have passed. She also posted an emotional post on her Twitter account, writing, "Thinking of you all today and every day. I love you with all of me and am sending you all of the light and warmth I have to offer on this challenging day."

The design isn't unique to just Grande, where the ink idea surfaced last year through tattoo artist Sam Barber, who created it in order to help raise money for the victims' families. The worker bee is the symbol of Manchester, and soon parlors across the U.K. began to participate in the fundraising, where every bee tattoo bought went directly to the families of the injured and killed. At £50 a session (which comes out to about $65,) it helped to raise a lot of money.

Grande had a difficult time recovering from the bombing, where she felt heavy with the knowledge that her fans died because they chose to see her perform. Her manager shared with the press that the artist felt "every name" of the victims who died in the bombing, and she wasn't sure if she would be able to continue performing her songs after this.

She went on to meet the families of the victims, and decided to organize the One Love Manchester concert two weeks later, which was a benefit concert that raised money for the We Love Manchester Emergency Fund. There were rumors that Grande received the worker bee tattoo herself backstage at the concert, but there was no photographic proof of that until now.

According to Refinery29, Grande credits the tattoo to Brooklyn-based artist Mira Mariah (@girlknewyork,) which means she didn't get this particular design at the concert as predicted, but the symbolism is the same.

There were heart-filled responses under the comments section of the photo, where her picture not only made people take a moment and remember those who had tragically passed, but also helped others continue to heal.

"I come from Manchester and this attack has effected me so so much and if it wasn't for you and your positivity i don't know where i would be. Thankyou Ariana ilysm," one follower wrote.

"They will never be forgotten," another posted. "One love Manchester for ever," another shared.

This new tattoo post came on the heels of another ink revelation, where it was speculated that the artist got matching tats with her unconfirmed boyfriend, actor Pete Davidson. Fans who were excellent at internet sleuthing noticed that Grande got a new tattoo on her finger of an outline of a fluffy cloud, which matched a finger tattoo that Davidson had.

That is also why so many fans took to her comments on the bumble bee photo to give her their congratulations, because they speculated that the cloud emoji in the caption, followed with the words "forever," meant that she was officially dating the actor.

Whether there is a double meaning behind the caption isn't confirmed, but the sentiment behind her bumble bee tattoo is so touching. While she is still processing the deaths from the tragedy, it's beautiful to see her honor the victims and treasure their memories.

More like this
All The Products Hailey Bieber Used For Her Birthday Makeup Look
By Olivia Rose Ferreiro
Kim Kardashian On The Beauty Hack That “Changed My Life, My Skin, My Confidence”
By Taylor Jean Stephan
Dua Lipa On YSL Beauty, Plus Her Fearless Approach To Hair & Makeup
By Erin Stovall
8 Gorgeous Hair & Makeup Moments From The 2022 American Music Awards
By Audrey Noble
Get Even More From Bustle — Sign Up For The Newsletter