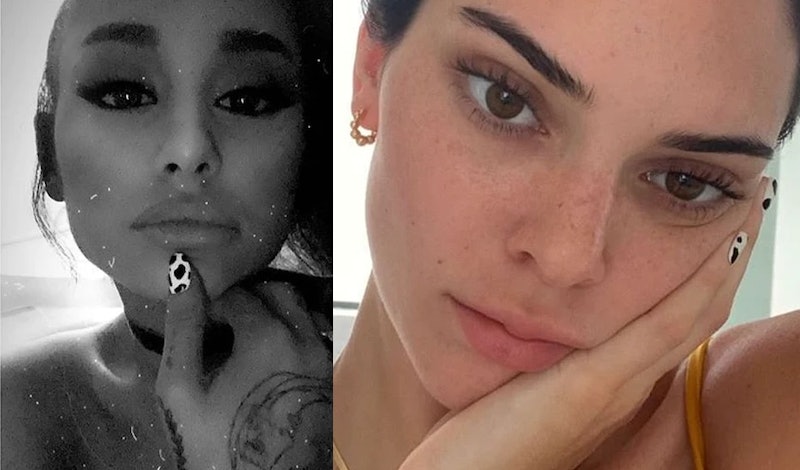 An unexpected trend is taking over this spring season, and some of your favorite A-list celebrities are already on board. Ariana Grande and Kendall Jenner had cow print manicures, so naturally we're all going to get cow print manicures.

Ariana Grande was the first to debut her nail art, where the artist posted a black and white selfie of her new manicure on her Instagram Stories. A bold black and white print, Grande tagged the traveling nail artists Nail Anatomy in the post. The artists make house visits in the San Fernando Valley and Los Angeles area, so Grande got her art done from the comfort of her own home. Jenner soon followed suit. Seeing the cow print trend take off, it's not surprising that Jenner, one of the fashion world's most sought-after models, rocked her own version.

On March 23, Jenner posted her own selfie with cow print nail art. She paired hers with a yellow bikini, hinting that Jenner was summer-ready with her new mani. The cow print trend isn't a new fad that Jenner jumped on board with, either. She has been itching to try the black and white splotches since winter. In February, Jenner shared in an interview with Allure that she has been meaning to book an appointment for just that pattern.

Jenner was the March cover of Allure, and the magazine asked the model what were her plans for her next manicure. "So there's one that's like cow print. I know that sounds really weird but it's actually really cool. So we'll see if that happens any time soon," Jenner said. It took a few months, but the print is still chic and Jenner finally made her plans a reality.

If you're wondering why all your favorite celebs have focused on cow print lately, it's because the pattern has been slowly becoming trendy over the last few months.

Kylie Jenner took on the look herself, where she wore cow print back in January. The youngest Jenner channeled her spotted pattern in the form of a bathing suit, which she wore while on vacation with daughter Stormi and former friend Jordyn Woods.

Meghan Markle was spotted wearing cow print pumps with a simple back dress back in January, where she visited Smart Works, one of her royal patronages. Markle wore a pair of Gianvito Rossi cow print pumps, giving an unexpected pop to her monochrome outfit.

Dua Lipa took a different course with her cow print look. The artist decided to work the spots in the form of cowboy boots, which Lipa styled with athleisure. She paired her cow print boots with side-stripe Adidas track pants and a cropped blouse, creating an unexpected mix of trends.

Seeing how cow print is taking over Hollywood, it will probably be a major trend during the upcoming season. Whether you wear it in your footwear like Markle and Lipa, or rock it on your fingertips like Grande and Jenner, you can get ahead of the curve and incorporate it into your own look. Say goodbye to cheetah print this summer, and say hello to cow print.