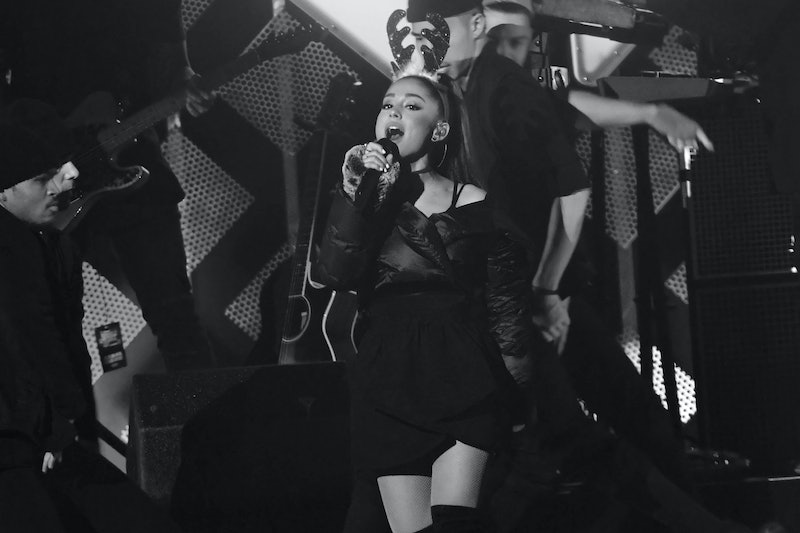 Following a deadly incident that occurred during her concert in Manchester, Ariana Grande responded by saying that she's at a loss for words. "Broken. from the bottom of my heart, I am so so sorry. I don't have words," she tweeted just before 11 p.m. EST on Monday. Though witnesses reported hearing two explosions toward the end of the concert in Manchester, the Manchester Police Department has yet to confirm the details. What the public does know, however, is that at least 19 people were killed and that about 50 were injured. Furthermore, some concertgoers are still missing.

Shortly after reports of what's being investigated as a terrorist attack surfaced, Grande's representative released a statement to Variety saying the singer was "okay." Around the same time, Universal Media Group, Grande's music label, also released a statement: "We are deeply saddened to learn of tonight's devastating event in Manchester. Our thoughts and prayers are with all those affected by this tragedy."

After such a horrific, unexpected incident, it's not difficult to understand why Grande would be at a loss of words. Those affected by the potential attack were surely some of her most dedicated fans. And it's especially heartbreaking that many of the victims could have been young children and teenagers.

At the time, Grande was on her European and Latin American tour and was scheduled to play two arena shows in London on Thursday and Friday this week. From there, she was set to go to Belgium. It's unclear whether or not her schedule will change following the frightening incident.

CBS News reported that two U.S. law enforcement officials confirmed the explosions were set off by a suicide bomber. They also are investigating claims that the bomb was a "nail bomb" made of nuts and bolts, as ball bearings had been recovered at the scene. Nail bombs can also include other types of shrapnel such as bits of razor blades and screws.

Today, attacking a crowd of people during a concert is, unfortunately, not an anomaly. Many venues have begun installing metal detectors, but as Steve Adelman, vice president of the Event Safety Alliance, told Billboard, pat-downs can actually be more effective. Still, even with heightened concert security, concertgoers run the risk of attacks happening directly outside of the venue.

After more details emerge regarding the latest concert attack, authorities will surely consider ways to make such crowded events safer. Here are some ways you can help.