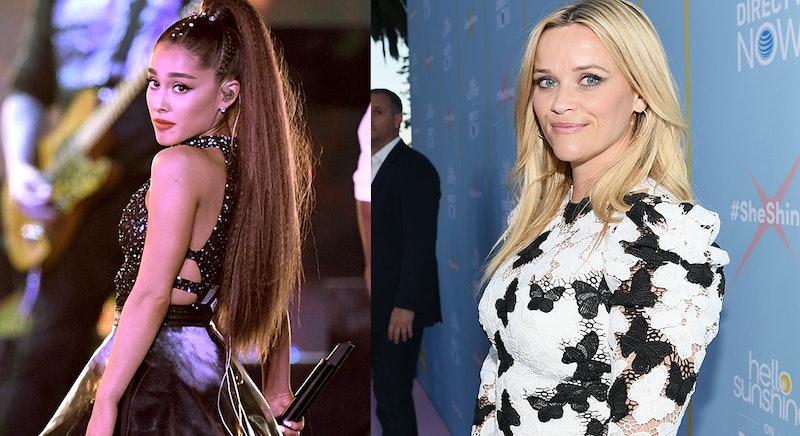 Fans are on quite a nostalgic Easter egg hunt piecing together this songstress' epic new project. As of Tuesday afternoon, audiences have about 75 percent of Ariana Grande's "Thank U, Next" music video figured out, as the singer has posted nods to films like Mean Girls and Legally Blonde in the last few days with captions including the song's lyrics. Not only has she posted multiple photos that are totally Legally Blonde-inspired, but Grande's message to Reese Witherspoon suggests she's about to go full-on Elle Woods.

Recreating an iconic scene from the 2001 film, Grande posted a photo of herself channeling Elle as she's on the treadmill working out with her orange Mac laptop out. The photo was captioned with one of Elle's signature lines, "Whoever said orange was the new pink was seriously disturbed." Witherspoon posted a screenshot of the photo to her Instagram story with the caption, "serious Legally Blonde Vibes," tagging Grande and adding floating hearts.

Grande responded to Witherspoon's shoutout by thanking her for embodying such a legendary female role, posting to her own story: "wait til u see the rest! thank u for originating one of the most iconic, necessary & brilliant female roles ever. love u the most." It's official: Ariana Grande is about to be Elle Woods. Thank u, next, Warner Huntington III.

Before thanking Witherspoon for blessing fans with such an iconic role, Grande posted screenshots of Elle to her Instagram story captioned, "thank u, next."

Her Instagram feed posts are even more telling of what's in store for the music video. On Tuesday, Grande posted a photo of herself with Jennifer Coolidge, who played Elle's BFF Paulette Bonafonté. Coolidge was dressed as her eccentric character and the photo was captioned, "new best friend .... thank u, next." Cameo much?

Now, fans are just trying to figure out the last piece of the puzzle.

Keep in mind that Grande also posted a Grey's Anatomy "Thank U, Next" meme on Twitter last week, which got responses from Ellen Pompeo and Kate Walsh. (Although this wouldn't necessarily fit in the theme of classic '00s films.)

Like Legally Blonde, Grande's breakup anthem has created major waves in the entertainment industry. The song was Grande's first that debuted at No. 1 on Billboard's Hot 100. On Monday, it was revealed that "Thank U, Next" had officially gone platinum. The same day, Grande posted a video of the lyrics thanking fans for the song's success, saying, "Officially platinum, don't worry... you're still getting a video."

"Thank U, Next" is the ultimate anthem for survival and strength, and what better way to illustrate that than channeling some of pop culture's most badass women?