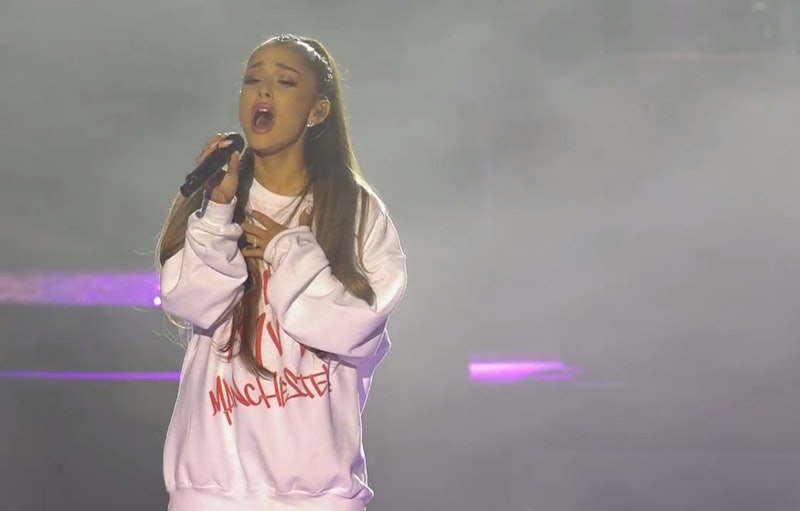 Ariana Grande's One Love Manchester concert on June 4 was a touching celebration of choosing love over hate. It was a night of sweet and emotional performances dedicated to those who were affected by the May 22 terrorist attack. As the concert finale, Grande sang "Somewhere Over The Rainbow" at the One Love Manchester concert and her heartfelt rendition will have you tearing up and reaching for some tissues. As the finale, Grande sang her hit song "One Last Time" and was joined on stage by all of the event's performers, including Miley Cyrus, Coldplay, Katy Perry, Justin Bieber, and Pharrell Williams.

Even during that song, Grande began to tear up while singing and with good reason — "One Last Time" is reportedly the final song she sang during her May 22 concert in Manchester, before the terrorist attack occurred. After that song, the One Love Manchester stage cleared and it was just Ariana, the crowd, the band, and confetti on the stage. She blew kisses to the audience as the opening chords of "Somewhere Over The Rainbow" were played. Grande belted out the classic tune hitting all the right notes. When the livestream camera panned to the audience, you could see that the tears were flowing and cell phones were being held up as lights.

By the final verses, even Grande herself began to cry, pausing the song for about a minute amid audience applause and encouragement. She resumed the song for the last lines of lyrics and told the crowd as she teared up, "Thank you so much. I love you."

Watch Grande's heartfelt performance in the video below.

It was a perfect and touching ending to a star-studded concert that paid tribute to Manchester, as well as those affected by June 3's London attack.