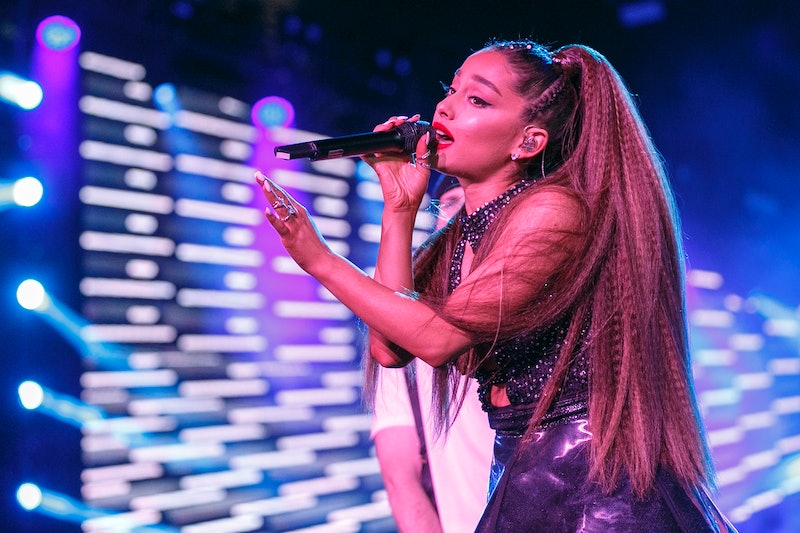 Last night (March 25) on her Sweetener tour, Ariana Grande got emotional while singing about Mac Miller. The teary moment during her performance of "Thank U, Next" led to a Twitter shoutout by Grande, who thanked her fans for "accepting my humanness." The singer seemed thankful for the outpouring of love she received after getting misty eyed on set, but this isn't the first time that Grande shows her humanity on tour, especially when it's in connection to her late ex.

During a performance in Washington, D.C., Grande got choked up while singing the "Thank U, Next" line — "Wish I could say, 'Thank you' to Malcolm/'Cause he was an angel." As seen in fan videos, Grande appeared to get overwhelmed by the reference to Miller and stopped singing. Her dancers offered her support, but she struggled to get through, choosing to skip a few lines to get herself together. Even when she picked the song back up, it was clearly hard for her to keep going. Luckily, her fans were happy to help her out, singing all those words she couldn't.

According to the BBC, during the soundcheck on opening night of the tour (March 19), Grande revealed songs about Miller like "Imagine" and "Ghostin'" were a little "too heavy" to play live. At least for right now. "if i can get thru it yea," Grande tweeted about the possibility of "Ghostin'" being added to her setlist. "But right now it’s not on the set list. i jus want to have a good time with y’all and like .... make it thru the show lol."

It's been just six months since the 26-year-old Miller died of an accidental drug overdose. And Monday, March 25, was also the six-year anniversary of "The Way," Grande's first song with Miller, which might have made the night even more emotional for the pop star. Before the show, Grande posted the words "six years" on her Instagram story in reference to the anniversary.

After the emotional show, Grande thanked fans on Twitter for always being there for her. "It’s super emo and difficult singing some of these songs. but you make me smile," she wrote, adding, "i love u and thanks. i feel your warmth up there and it helps and is greatly appreciated."

Though this is the first time Grande addressed any on-stage tears during her new tour, she has, in fact, showed her "humanness" mid-performance before. Fan videos from her first stop in Albany, NY, on March 19 showed that she also got emotional while performing her cover of Imogen Heap's "Say Goodnight and Go." At the end of the track, she sounded as if she was going to cry, but managed to get through the song and someone hit all the high notes.

It's unclear if it was also thinking of Miller that brought about such emotion in her, but it's clear that the rapper has been on her mind during this tour. At her first show, Grande paid tribute to Miller by playing his music before she took the stage.

"Ariana grande is playing Mac Miller right before her opening song for sweetener tour rn and my heart can’t handle it. SO MANY TEARS," one fan on Twitter wrote on March 18.

In the past few months, Grande has continued to pay tribute to Miller, who she dated for nearly two years. A week after his passing, the singer shared a video of Miller goofing around on Instagram, along with a sweet caption about how she "adored" Miller "from the day i met you when i was nineteen and i always will." More recently, she's shared a birthday tribute to him and had an emotional response to Miller's Grammy's loss.

Miller might be gone, but he has not been forgotten by Grande, who will continue to miss him, sometimes so much that it brings her to tears. After all, she's only human.

More like this
Ed Sheeran’s Surprise Gig Included An Iconic Britney Spears Tribute
By Bustle Editors and Darshita Goyal
Mariah Carey Is Releasing Her “Lost” '90s Grunge Album
By El Hunt
Self Esteem's “F*cking Wizardry” Is An Anthem About Knowing Your Worth
By El Hunt
Everything To Know About Taylor Swift’s 10th Studio Album, 'Midnights'
By Grace Wehniainen and Jake Viswanath
Get Even More From Bustle — Sign Up For The Newsletter