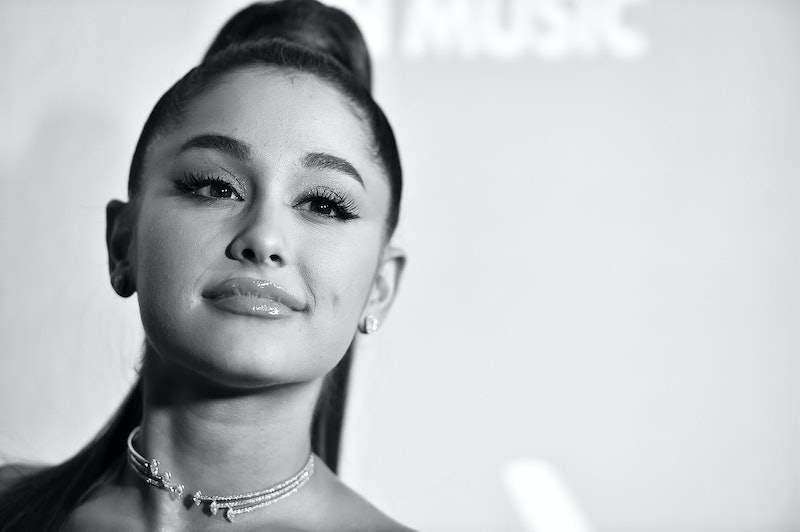 On Friday, Feb. 8, Ariana Grande gave her fans several gifts — her new album Thank U, Next dropped, along with the Grande's video for "Break Up With Your Girlfriend, I'm Bored," her new single. The song's video is a sultry, moody look at a love triangle between Grande, a man (played by Riverdale actor Charles Melton), and another woman (played by model Ariel Yasmine). The video was directed by Hannah Lux Davis, who was also at the helm for Grande's videos for "Thank U, Next," and "7 Rings."

The visuals for "Break Up With Your Girlfriend, I'm Bored" feature Grande sporting her blonde hair at a party and watching Metlon and Yasmine dance. Grande and Melton's eyes meet from across the room, but then Yasmine invites Grande to join the couple on the dance floor. The trio dance together, but then when they go to the bar to get drinks, Grande stares at couple with envy. She even strokes Yasmine's brunette hair... and at another roof top party, Grande sports a similar hair color. Coincidence? Probably not.

And when Grande arrives with her new look, Melton's character can't keep his eyes off her at the party. You can watch the video below to find out how this love triangle ends.

Grande has been teasing fans with sneak peeks of the album on social media since she announced it in November 2018. She has also dropped the hit singles and respective music videos for "Thank U, Next" and "7 Rings" this winter.

Earlier in the day on Feb. 8, Grande continued the trend by announcing on Twitter that a new video would drop on Friday in addition to the album. "this too..... album and 1 more video .... tonight," she tweeted, along with a photo that looked like a still from the new music video.

Grande, however, did not specify which song the music video would be for. Fans widely speculated that "Break Up With Your Girlfriend, I'm Bored" would be the song, since the singer announced the track as her next single earlier this week.

The images she shared from the video were also a major hint that the song about a love triangle would be getting the video treatment. About an hour later, Grande tweeted what fans thought was another still from the video featuring herself positioned in between Melton and Ariel Yasmine.

The Twitter speculation about the video didn't end there, though. Some fans thought the video was about Grande looking for a new female friend.

Many fans seemed to theorize that "Break Up With Your Girlfriend, I'm Bored" is about Grande's ex, Big Sean. Grande and Big Sean dated in 2015 for about 8 months. Recently, he has been romantically linked to Jhene Aiko.

One Twitter user thought the video represented Grande falling in love... with herself.

And this fan wanted to know if the song and video were about Pete Davidson, Grande's ex-fiancé.

Other fans found expressed their love for the video in memes.

And so many fans just couldn't get over the ending.

Clearly, Grande's new music video has left Twitter shook — and with a lot to think about.