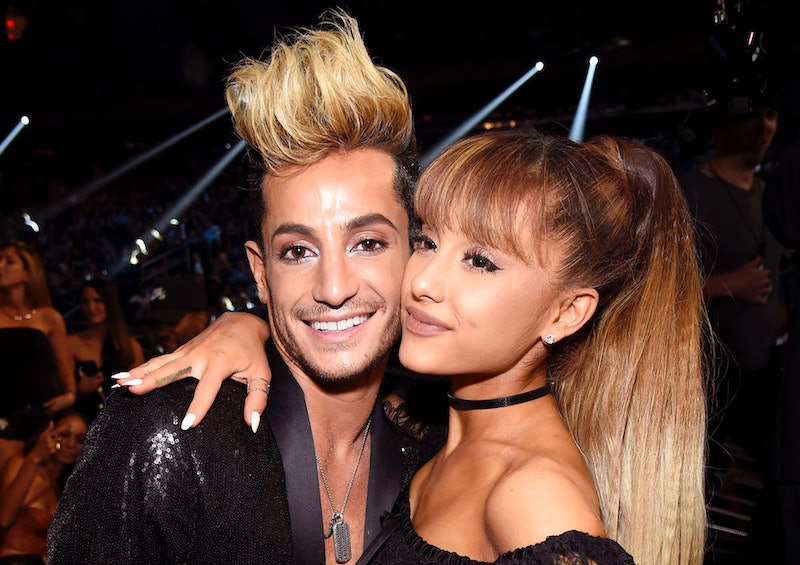 During a Dec. 3 interview with Entertainment Tonight, Ariana Grande’s brother Frankie revealed another collaboration with his sister isn't out of the question. Frankie, an actor, YouTube personality, and singer, debuted his new single “I Got Me” in November — and the ballad even includes a subtle nod to his famous sister. In a shout-out to presumably generations of Grande women, he sings in the track, "I got the women in my life, three generations of fierce, brothers and friends who stand by me if my armor gets pierced.” While the sound of “I Got Me” is different from the sound of, say, “Thank U, Next,” Frankie suggested the siblings might work together in the future — that is, under certain conditions.

“We're [a] family and we do stuff all the time together. It just has to be right,” Frankie told ET. “I'm a little bit more of a rocker, so, I don't know. If the timing is right… I think it would be because we want to say something, you know? I don't think it would just be just to release a song. I think it would have to be for a purpose, and we'll see what that is."

The future collaboration wouldn’t be the first between the two. In December 2018, Ariana and Frankie collaborated on a “Seasons of Love” cover from the Broadway musical Rent. The cover was released ahead of Fox’s Rent Live! in January, which starred Vanessa Hudgens, Jordan Fisher, Tinashe, and more. In the video’s description, Frankie gushed about his sister and wrote, “I am beyond honored to have worked on this incredible project with my best friends in the world including my wonderful sister.”

Frankie, who shares the same mother as Ariana, is the Sweetener singer's older half-brother. He also has another half-brother named James Marchione. Frankie's credits include Broadway shows such as Rock of Ages and Mamma Mia!, as well as TV shows like Henry Danger. Ariana, on the other hand, has also appeared on Broadway as well as the Nickelodeon shows Victorious and Sam & Cat prior to pivoting into music. While both siblings are now involved in the music industry, Frankie told ET of their differing rock and pop sounds, "We're very much in our own lanes. You know, like… I'm doing Rock of Ages out here in L.A., she started on Broadway."

In his interview with ET, Frankie reflected on their “Seasons of Love” collaboration, predicting another collaboration might happen at some point. “It was the first time we ever released something together,” he said. “It was beautiful. So, whether or not something like that happens in the future, I'm sure it will.”