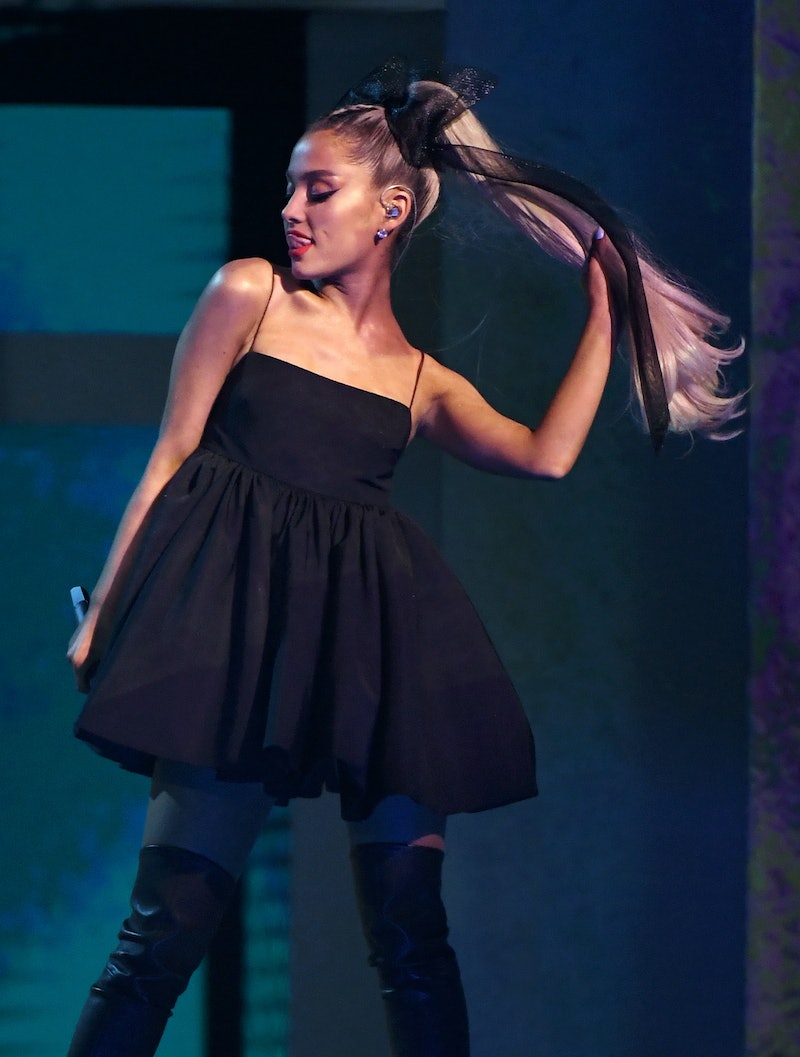 Ariana Grande's hair is becoming as iconic to her image as Cindy Crawford's mole or Marilyn Monroe's blonde curls. While the artist usually keeps her long locks in a signature ponytail, she sometimes experiments with its styles. Ariana Grande's latest ponytail is massive, and it appears to go past her knees. Not only that, but the high pony is sporting some new caramel streaks. The long locks have also been put into a bubble hairstyle that is worthy of Princess Jasmine.

The Grammy winner usually wears her waist-length hair in a tight and sleek ponytail, but this time around she opted for something a little more editorial. Grande posted the photo onto her Twitter on Feb. 26, and paired the tweet with a cryptic caption. All she used was a moon emoji. This has led followers to speculate as to what prompted the new look. Not only was it fashioned into a bubble pony, but the style was topped off with an exaggerated black bow, meaning this probably wasn't just an off-duty style. The photo was also taken either on set somewhere or in a glam room, since Grande was sitting in a black foldout chair and there were makeup brushes in the foreground of the shot.

Grande's makeup was also highly stylized, with the star sporting a sharp cat eyeliner and pink eyeshadow. In the shared photo, Grande tilted her head and put on a magazine-ready face, clearly feeling the look.

Some fans wanted to know if this was a tour visual, with Grande teasing upcoming concert looks. The Sweetener World Tour begins on March 18 in Albany, New York, so it wouldn't be too far of a stretch.

But seeing how the artist left a moon emoji in the caption, other internet sleuths guessed that this was the look Grande will wear during her "NASA" music video.

Fans of Grande know that she likes to leave easter eggs in her music videos. In the "7 Rings" video that came out in January, eagle-eyed viewers noticed the word "NASA" spray painted on a wall and on a car in the background. People believed that Grande was hinting that the "NASA" music video was coming soon.

Thirty minutes after the original tweet went live, Grande posted a follow up video of her rocking the same bubble pony. In it she once again brought up planets, making fans even more confident that she was on set of the "NASA" music video.

"I would very much enjoy some more planet emojis next update please. i could really use a jupiter a neptune and a saturn [sic]," Grande captioned.

But that theory was quickly debunked, straight from Grande herself. A Twitter user asked her if she was indeed filming the "NASA" music video, and Grande answered with a simple, "no."

The artist posted the same photos and videos on her personal Instagram account, tagging Sweetener in the images. Whether it's tour visuals or music video beauty looks, none of us know. The mystery continues.