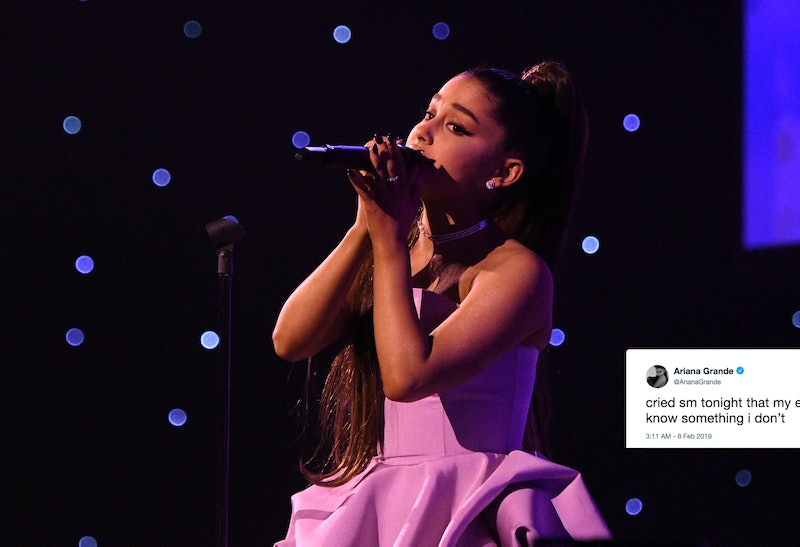 Friday, Feb. 8 was a big day for Ariana Grande. The singer dropped her fifth studio album, Thank U, Next, at midnight, and, according to the singer herself, she's barely stopped crying since. In fact, Ariana Grande's reaction to the Thank U, Next release will make fans everywhere want to give her a big hug.

"my eyes and lips are puffy from crying sm [so much]," Grande tweeted 12 hours into the album's release on Feb. 8. She continued, "i feel relieved n overwhelmed n grateful. thank u for everything." According to previous tweets, it was speeches at her Thank U, Next release party that had the singer tearing up.

Despite being on Twitter in the hours leading up to her album's release, teasing her new music video for "Break Up With Your Girlfriend, I'm Bored," Grande was mysteriously silent at midnight when the album dropped, and when she did return to the social media site, she explained why. "i'm sorry my posts were late," she tweeted just 18 minutes after the album dropped. "scooter allison my mom and wendy made speeches and i cant stop crying," she wrote. She continued, "i love y'all. i hope u enjoy this album. this music, you guys and my friends saved my life. love u. sry. iight bye."

Fans of the singer know that the "scooter" she's referring to is probably Scooter Braun, Grande's manager. In fact, Braun did deliver a heartfelt speech in honor of the singer's fifth album release. And though the party was a private affair, fans can see some of the toast thanks to Grande's friend and frequent collaborator, Victoria Monét. She gave fans a look behind the scenes of the release party and the speeches that made Grande cry on her Instagram Story. In a string of short videos, Braun can be heard praising Grande, harkening back to the early days when they first started working together in 2013, the same year she released her first album. "She had never sang in an arena. And she looked at me and said, 'Do you think I could get to a place where I'm playing arenas?'" Braun recalled. "Now, I've seen her play arenas, I've seen her play stadiums, I've seen her break records."

Grande's last two albums, Thank U, Next, and Sweetener, have both earned praise for the singer's display of vulnerability. On Sweetener, the singer opened up about her anxiety on "Breathin," and now with songs like "Ghostin" and "Fake Smile" on Thank U, Next, the artist is only getting more personal. It's something Braun said he admired about her. "Ari, you're the kind of artist, the reason you're touching so many people, and people love you so much, is because you're trying to figure it out, just like them. But you take the chance to speak out about it," he said. Braun continued,

Assuming the other speeches were just as touching and emotional, it's no wonder Grande told fans on Twitter that she "cried sm tonight that my eyes feel like they know something i don't." Hopefully, Grande knows that her vulnerable fifth album has fans shedding tears right along with her.