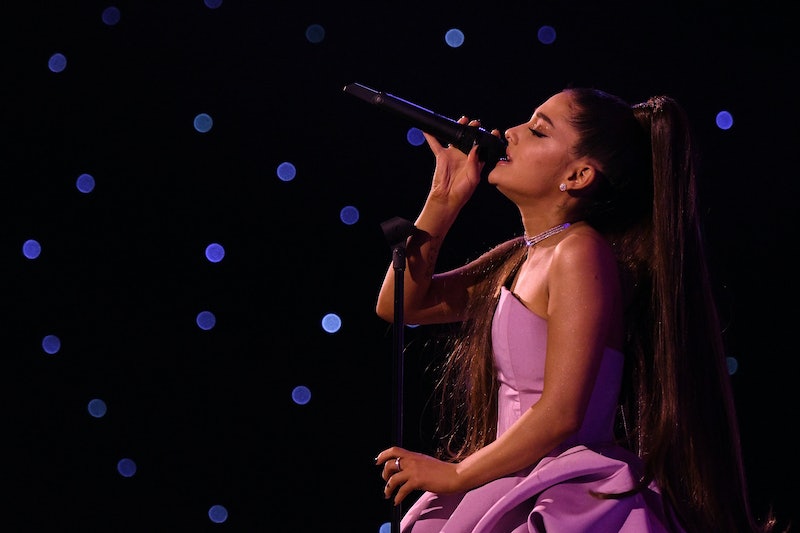 Ariana Grande's newly-released fifth album, Thank U, Next features some of the singer's biggest bangers and most exciting singles, but her latest project also showcases some of Grande's most honest writing yet. In fact, many of the songs on Thank U, Next feature Grande at her most vulnerable, expressing her anxieties and heartbreaks openly with her fans.

A bit after midnight on Feb. 8, after Thank U, Next was officially released, Grande tweeted about how much the album meant to her, telling fans that the project "saved my life." In an emotional tweet, the singer wrote, "i cant stop crying. i love y’all. i hope u enjoy this album. this music, you guys and my friends saved my life." A few hours later, Grande added that she "cried sm tonight that my eyes feel like they know something i don’t." The next morning, she continued, tweeting, "i feel relieved n overwhelmed n grateful."

The singer has been incredibly open about the fact that working on Thank U, Next has been an emotional process, telling Billboard back in December that she spent all of her time at the studio with her friends after the death of her ex boyfriend, Mac Miller, and the end of her engagement to Pete Davidson. Explaining to the outlet that the album was the result of "feminine energy and champagne and music and laughter and crying," Grande added, "This [album’s] not particularly uplifting. A lot of it sounds really upbeat, but it’s actually a super sad chapter."

In the weeks leading up to the album's release, the singer offered plenty of insight into the inspiration behind many of her songs, which have hinted at the impact that Miller's sudden death has had on her. In December, while teasing the song "Imagine" — which many fans think is about Miller — Grande told fans, "a lot of this album mourns failed yet important, beautiful relationships in my life (as well as celebrates growth / exploring new independence)."

She continued, "But for those of you asking about imagine: i would say if 'thank u, next' = acceptance... 'imagine' = denial. hope that makes sense." A month earlier, Grande had explained to fans on social media that "Imagine" was about "a simple, beautiful love that is now (and forever) unattainable," which implied that the singer was using the song to work through the grief of losing her ex-boyfriend.

Though fans found plenty of references to Miller and Davidson on Grande's new album, it seems as if there are still some aspects to the singer's private life that she isn't ready to reflect on publicly. After teasing a song titled "Remember" in her "Breathin'" music video in November, Grande admitted in January that she had replaced the track with what would become the album's third single, "Break Up With Your Girlfriend, I'm Bored." In a tweet to fans, the singer wrote, "i added a fun one (lol) to replace one that i decided i don’t think wanna share w the world. so we back to twelve tracks. i appreciate u understanding in advance." Though the singer did not reveal why she chose to pull "Remember" from the album, the fact that she said she replaced it with "a fun one" suggests that the track might not have been the most upbeat.

Of course, "Imagine" and the missing "Remember" weren't the only emotionally honest and vulnerable tracks on Thank U, Next. The song, "Ghostin" also seemed to resonate with fans as a particularly heartbreaking track about lost love. In January, Grande explained the song was about "feeling badly for the person you're with bc you love somebody else. feeling badly bc he can tell he can't compare.... and how i should be ghosting him." While Grande hasn't explicitly said that the song is referencing her relationship with Davidson and her experience mourning Miller, it's clear that she sees her songwriting as a way to process the emotional roller coaster of the last year.

Despite saying in the past that music "fixes everything" for her, Thank U, Next doesn't pretend that Grande has completely healed, as evidenced in the song "Fake Smile." In the song's pre-chorus, she sings, "I can't fake another smile/I can't fake like I'm alright ... And I won't say I'm feeling fine/After what I been through, I can’t lie," addressing the grief, heartbreak and anxieties of the past year with simple honesty. While she explored her anxiety both on her last album, Sweetener, and in the music video for "Breathin," Grande's lyrics on "Fake Smile," about struggling with her mental health and refusing to pretend that she's OK, shows an even more vulnerable side of the singer.

"When life tries you with such serious sh*t so many times, your priorities change," Grande told Billboard. "I don’t give a sh*t. I just want to be happy and healthy — one day — and make music." She might not be at that place just yet, but her willingness to explore all of the trials and tribulations of her life in her music has helped her connect even more deeply with fans.

And the end result is more than just an album full of fun party songs and anthems about female friendship — it's also Grande's most touching and vulnerable album yet. Clearly, when she promised fans that Thank U, Next was her most honest and "brave" work, she wasn't kidding.

More like this
Meghan Trainor & Daryl Sabara Are Expecting Their Second Baby
By Jake Viswanath
Adam Levine & Behati Prinsloo Welcome Their Third Child Together
By Jake Viswanath
Hilary Duff's Husband Matthew Koma Has Her Name Tattooed On His Butt
By Jake Viswanath and Stephanie Downs
Jennifer Coolidge Slid Into Ariana Grande’s DMs In The Most Iconic Way
By El Hunt
Get Even More From Bustle — Sign Up For The Newsletter
From hair trends to relationship advice, our daily newsletter has everything you need to sound like a person who’s on TikTok, even if you aren’t.