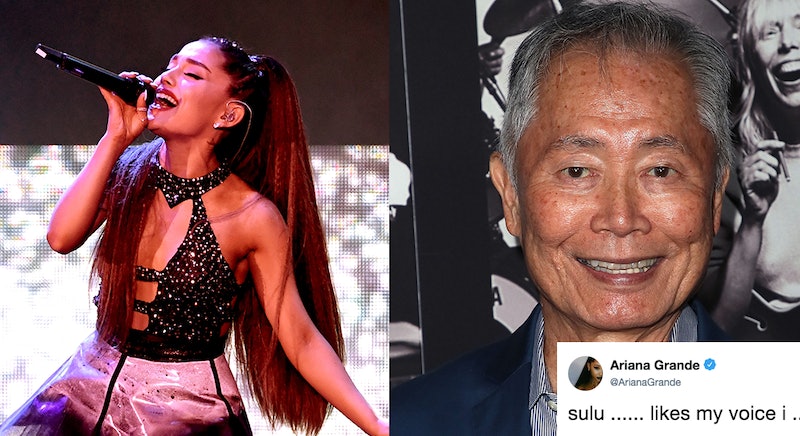 Not a long time ago, in a Twitterverse not far, far away, Luke Skywalker and Sulu boldly went where so many Arianators have gone before: they tweeted their admiration for the artist behind smash single “Thank U, Next.” On Sunday, Star Trek icon George Takei tweeted about Ariana Grande, her much deserved fame, and her stunning, larger-than-life voice. And on Tuesday, Billboard's 2018 Woman of the Year flipped out about Sulu’s post. And yes, the whole thing rules.

This magical exchange came to be thanks to a star of another space opera franchise. On Saturday, Star Wars icon Mark Hamill posted “Thank you, next”#TwitterTest4Twits,” unaware that the tweet shared a name with Grande's latest hit tune and to-be-released fifth album. Oh, but he learned.

The following day, Grande quoted his "Thank you, next" post and wrote, "i can't breathe." However, this was not actually a shoutout to Ari's newest single, a point that he made clear in a very endearing followup tweet. Hamill wrote,

“You know you're out of it when someone suggests you tweet what you think is just a random phrase that turns out to be the title of the new album by @ArianaGrande, one of the most popular artists in the history of showbiz. #ImSorryAri #ItsUnotYou.”

Hamill literally called her one of the most popular artists in the history of showbiz, and you know what? No lies detected. Grande tweeted that she plans to tattoo The Last Jedi star's tweet to her forehead, an entirely fitting and understandable reaction to the situation.

And then, the worlds of Star Trek and Star Wars collided in a big way. Takei quoted Hamill’s tweet about Grande, adding, “Her popularity is well-earned, @HamillHimself. She has what feels like the voice of an angel, that @ArianaGrande. One that could fill the vast heavens.” Again, no lies detected.

To recap: Hamill tweeted about Grande. Takei tweeted at Hamill about Grande. Both Takei and Hamill sang Grande’s praises for all the Twitterverse to hear. And Grande felt a mess of feelings. When Twitter is not awful, it can be so incredibly good.

Once Grande saw Takei’s post, she tweeted a bunch of heart emojis and wrote, “hello i am crying.” A few minutes later, she added, “sulu ...... likes my voice i ....... have to go.” And then, Takei asked Grande if she would be interested in being an ambassador for the 50th anniversary of Stonewall.

Thank u, Sulu. Thank u, Luke Skywalker. Thank u, Ari. I'm so flippin' grateful for these sweet tweets.