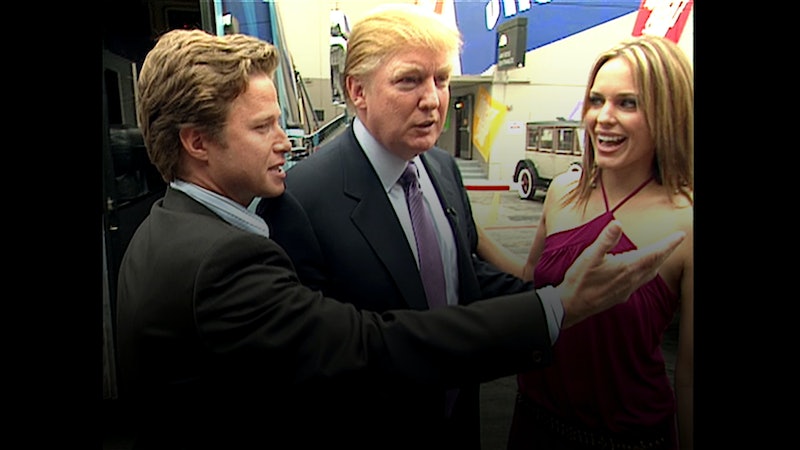 Following the growing allegations of sexual misconduct against powerful men in business and politics, the attention paid towards accusations against the president (all of which he denied) has grown too. Over the weekend, The New York Times reported the president has privately claimed that the Access Hollywood tape in which he is seen bragging about sexual assault is not authentic. That led Arianne Zucker, the actress in the Trump Access Hollywood video, to question how that could be possible, given that the president already apologized for what he said.

The video was a big deal during the campaign, given it came out in October, just weeks before the election. Trump is caught on the tape bragging about sexual assaulting women and getting away with it. He tells the then-host of the show, Billy Bush, that he uses his fame and fortune to kiss women and grab their genitals without consent. "When you’re a star, they let you do it," Trump said on the tape.

Later, when the two men notice Zucker, Trump told Bush, "I’ve got to use some Tic Tacs, just in case I start kissing her. You know I’m automatically attracted to beautiful — I just start kissing them. It’s like a magnet. Just kiss. I don’t even wait.” The video was filmed in 2005. The Times reported that Trump started spreading doubts about the authenticity of the tape in January before his inauguration.

I don't know how else that could be faked. I mean, unless someone's planting words in your mouth, that's the only other way. But it is puzzling to me. And I was — I was curious. I thought, how do you apologize for something and then renege on it? And that was just in question.

That's a valid question given the fact that Trump did offer an apology almost immediately. "I said it, I was wrong, and I apologize," Trump said in a video apology. "I’ve never said I’m a perfect person, nor pretended to be someone that I’m not. I’ve said and done things I regret, and the words released today on this more than a decade-old video are one of them." That is an admission that the event happened in addition to an apology.

But, as detailed in The New York Times, Trump began telling a different story after he won. He told a Republican senator in January that it might not have been him on the tape after all. "We don’t think that was my voice," Trump told the senator according to someone familiar with the conversation. And according to people close to the president, that position hasn't changed. He continues to suggest it wasn't him, even recently as sexual assault and harassment has become the focus of the country.

Access Hollywood even went on the record again that the tape was real. On Monday, host Natalie Morales said, "Let us make this perfectly clear: The tape is very real. Remember his excuse at the time was 'locker room talk.' He said every one of those words."

The White House has not responded to inquiries on the matter from media organizations, but Press Secretary Sarah Huckabee Sanders did address the matter on Monday. “He’s made his position on that clear at that time, as have the American people in his support of him," Huckabee Sanders said at a press conference. "The president addressed this, this was litigated and certainly answered during the election by the overwhelming support for the president and the fact he's sitting here in the Oval Office today."

But for most who hear the tape — including Zucker, who was mentioned on it — it remains very real.