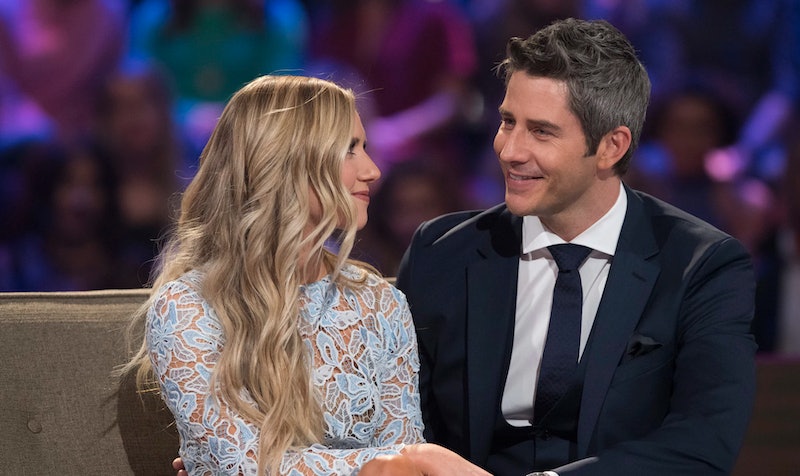 Another day, another exciting baby update for Bachelor Nation. While fielding fans' questions via his Instagram Story on Dec. 26, Arie Luyendyk Jr. shared a photo of Lauren Burnham's ultrasound, Us Weekly reported. The sweet moment came with a sweet caption too, proving that he and Lauren can't wait to become parents in the very near future.

When one fan asked Arie, "What is most exciting about being a dad?" the former Bachelor star gave an incredibly sincere reply. "So many things but mostly doing this together with her," he wrote alongside a photo of Lauren watching their baby on an ultrasound screen. "I can’t wait to meet this little person that has already grabbed our hearts."

Aww, how cute is that? Doesn't it just make you feel like melting into a big ol' puddle of love right now? Not only did Arie's response show how pumped he is to become a father — it showed how pumped he is to share in the journey of parenthood with his fiancée, too.

In an exclusive statement to Us Weekly back in November, Arie and Lauren announced that they were expecting their first child together. "I kind of had a feeling that I might be pregnant," Lauren confessed to the publication. "So my friend insisted on bringing a pregnancy test over."

After the 27-year-old took the test, she asked Arie to read the results. It came back positive, of course, and her husband-to-be had the most endearing reaction. "Arie came out with the test in his hand and tears in his eyes," Lauren told Us Weekly. "He was like, 'You’re pregnant!'"

Ever since, the couple has been sharing plenty of updates about their baby with fans of Bachelor Nation. In fact, Baby Luyendyk already has an Instagram page called — yep, you guessed it —  @BabyLuyendyk. This kid hasn't even been born yet, and the account already has more followers than most adults.

So, what kind of updates is this unborn baby posting, you wonder? Well, first of all, it's safe to assume that Lauren is probably doing all the posting for now. Each week depicts her growing belly and gives fans a glimpse into the baby's development progress.

For example, on Dec. 11, @BabyLuyendyk explained, "15 weeks! I’m the size of a taco and it’s a Tuesday. How about that!" How about that, indeed. Taco Tuesdays rock. The caption also noted, "my ears are almost completely formed and in the right place which is fun," and "I see light now, but my eyes are still closed. I have little toenails and my lungs are coming along nicely."

2019 is undoubtedly going to be an incredibly exciting year for Lauren and Arie. Before they welcome their first child into the world, the couple is set to tie the knot on Jan. 12 in Maui. Baby Luyendyk isn't due until June, so they'll still have a few months to prepare after that.

If either star is nervous about becoming a parent, they sure aren't showing it. And based on Arie's recent Instagram Story response, he's going to knock this whole "dad" thing out of the park regardless.