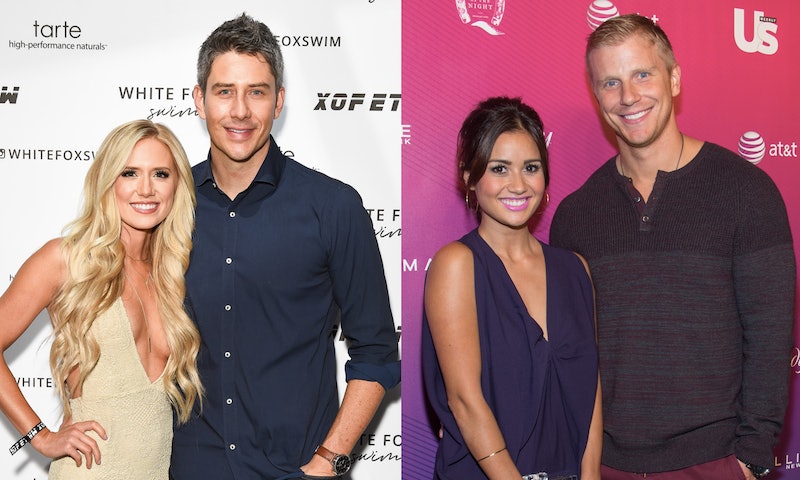 Technically speaking, Sean Lowe is the only Bachelor lead who married the "winner" of his season, Catherine Giudici (now Catherine Lowe). Semantics aside, Arie Luyendyk Jr.'s Bachelor journey did lead to a marriage with Lauren Burnham. The Lowes were at that wedding and Catherine has "never seen a groom that in love with his bride." Or at least, that's what she said a Feb. 5 interview with Us Weekly.

Catherine even declared, "Lauren was his air." Wow, that is quite the compliment. She said, "You had never seen a groom that in love with his bride. It was so sweet." If only this was filmed for a televised wedding special, right? At another point in the interview, Catherine said,

"It was obvious how in love they were with each other and I’m all about love and romance when you’re at a wedding."

Part of the reason they might have really felt the love at the Luyendyk wedding was because it was a relatively small guest list. Sean chimed in on the Us Weekly interview, remarking that the wedding was actually "a lot more intimate" than he expected. Catherine followed up, "Yeah, I think 75 [guests] and I’m happy we made the cut."

And the Lowes weren't the only people who were moved by Arie and Lauren's love at the wedding. In a January interview with Us Weekly, Bachelor host Chris Harrison began, "I didn’t think I’d get emotional."

The reality TV icon was on hand to officiate Lauren and Arie's ceremony. He confessed to Us Weekly, "I usually don’t, but when she started walking down the aisle, it kind of hit me, and I think it’s because we spent this whole week together." Then, Chris explained,

With that kind of lead-in, it's really not that surprising that anyone would tear up during the wedding ceremony. The wedding officiant admitted, "When you see that and then you see her walking down the aisle, and Arie started getting choked up, and I was like, ‘Oh, crap.’ So I kind of lost it. I was like, ‘I can’t be choked up when I start this wedding. Got to be professional.'"

It is very rare to see the beloved host get emotional. He's surrounded by so many intense feelings from the cast members, but he's usually calm, cool, and collected. If he is moved by the Luyendyk love, then who wouldn't be?

In a different January Us Weekly interview, Arie dished on seeing Lauren for the first time on their wedding day. The newlywed revealed, "I caught a glimpse of [Lauren] in the distance, and I just, I started crying. He even remarked, "She looked so stunning — she was everything I could have imagined in that moment."

In that same interview, Lauren summed up the wedding by saying, "Everything that I imagined, it was that and 10 times better." And she's not the only one who thinks so. Arie, Chris, Sean, and Catherine all felt the strength of their love that day.