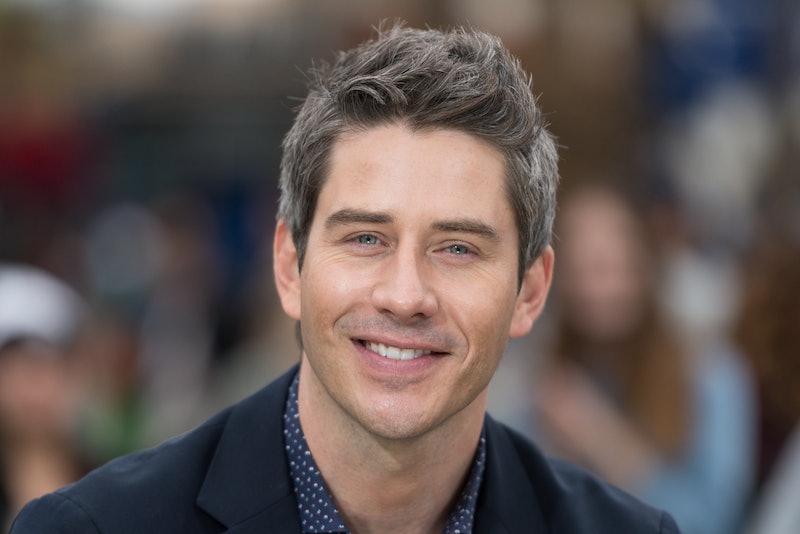 Make it pink, make it blue, or, you know, make it platinum blonde. Arie Luyendyk Jr. dyed his hair platinum blonde, the former Bachelor revealed in a May 13 Instagram. Like many others who are trying to keep themselves entertained during quarantine, Arie has found himself experimenting with different hair colors alongside his wife Lauren Burnham.

Arie's new look is one he's enjoying. He told a fan on Instagram comments that he was "kinda feelin" the blonde 'do. Other Bachelor and Bachelorette contestants were also into it, as evidenced by the comments on Arie's photo from Bachelor alums. Jared Haibon made an Eminem reference and jabbed, "Will the real Slim Shady please stand up?" Bob Guiney responded, "Well played vibe." And Tayshia Adams commented, "ARIE!!!!! Hahaha stopppp! You guys are too much! I'm actually really diggin it!!"

You may have also noticed that Arie's phone in the Instagram has a screen pulled up of all the photos he took of himself prior to the platinum blond transformation. He explained in his Instagram comments those were all of the "before pics."

This isn't the first time Arie's dyed his hair recently. Last month, he and Lauren went out of their comfort zones by choosing to dye their hair blue and pink, respectively. Lauren posted an Instagram of their dye jobs on April 12 and captioned it, "Alessi was napping sooo we did a thing + dyed each others hair lol now @ariejr's really a silver fox." They also filmed a video of them dying each other's hair, which you can watch on YouTube if you're looking for some quarantine makeover inspiration.

Seeing as Arie's already dyed his hair two different colors in a short amount of time (about a month apart), there's a good chance the platinum blonde won't last long.

More like this
Bella Hadid's Curly Blonde Bob Is Peak Marilyn Monroecore
By Audrey Noble
'Bachelorette' Vet Clare Crawley Unveiled 2 Special Wedding Day Accessories
By Stephanie Topacio Long
Hannah Ann Got Engaged 3 Years After 'The Bachelor' & The Proposal Was Dreamy
By Grace Wehniainen
10 Photos Of The Wildest Limo Arrivals From 'The Bachelor' Premiere
By Brad Witter
Get Even More From Bustle — Sign Up For The Newsletter
From hair trends to relationship advice, our daily newsletter has everything you need to sound like a person who’s on TikTok, even if you aren’t.