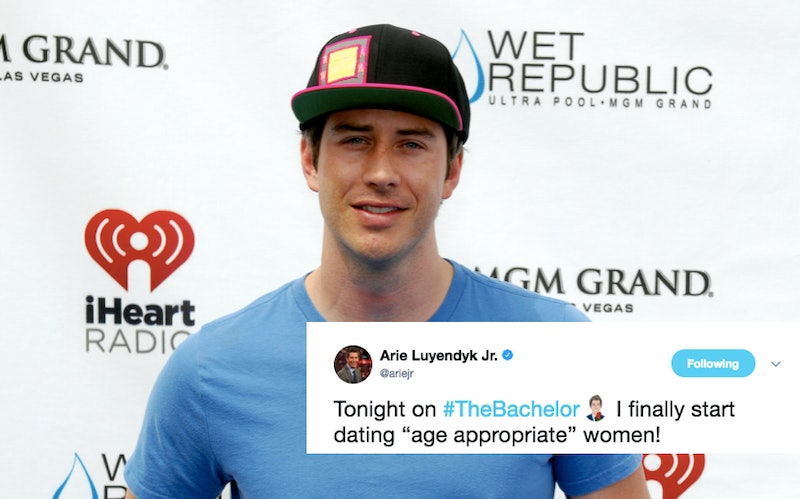 Man, who would have known that Arie Luyendyk Jr., was a funny guy? He's been a part of Bachelor Nation for years now, so he knows how it all works, and he knows how to poke fun at himself. Case in point? Arie's funny Bachelor tweet about age on Monday was a commentary on the national (maybe) discussion about whether or not he should be dating someone 14 years younger than he is.

If you're not caught up on The Bachelor, I wouldn't blame you, because this season is slow as molasses so far. But in any case, much ado has been made over the fact that Arie is 36 and his remaining contestants are between 22 and 29. There were a few women who were 30 and above, but he sent them all packing very, very early in the season. Love is blind and all that, but can a 22-year-old be into a 36-year-old and have a future together? Bekah (the youngest contestant) and Arie could go the distance, but is it likely? Probably not. Arie, though, is obviously hip to all the chatter about the youth in his season of The Bachelor, and that's why he's tweeting things like this ABC Bachelor press shot:

Oh, Arie — don't make me like you. I never decide on Bachelors until at least Week 10 (just like I don't bother to learn contestant names until then, either, because my brain can't keep track), but Arie may be growing on me. Arie knows that being on The Bachelor is a wild thing. It's ridiculous — and he's here to make fun and be topical.

In an interview with Hollywood Reporter before the season started, Arie addressed the age rumors (they were, of course, already swirling). He said:

"I think it’s more about the person and if they’re ready for marriage and how mature they are. Some women are far beyond their years and some women are very immature in their thirties — I’ve dated younger, older... [Age] definitely plays a theme throughout the season. It’s more about being ready. I was open to a variety, and that’s something that the producers knew."

Arie can joke about the age thing now, and he could deny that age didn't matter, but when he found out that Bekah was 22, Arie was not chill. He was a stammering mess. When Bekah finally let the cat out of the bag, Arie said, "You're so young! Gosh. Have you ever dated anyone my age? I obviously knew you were young when I met you, so that's why I was hesitant. I wanted to make sure you were ready for this."

He could barely keep it together, and even though he and Bekah have a serious physical chemistry connection, Arie was all like, "You're not old enough to get married." He was convinced that Bekah couldn't be mature enough to consider marriage. Bekah shut Arie's line of questioning down, saying, "Stop looking for me to give you the assurance you're not going to get. 'Cause you don't get that in love. And trust me, I want it to. And I want to know that I'm ready for something that I don't know if I'm ready for." I'm not sure, though, that Arie was convinced.

There are myriad problems with this. The first is that Bekah is 22, but some other contestants, like Maquel, are 23. Is that the yearly cutoff for when marriage is appropriate? Because it's basically the same thing. Where are the pitchforks for the other women if they're there for Bekah? Secondly, who is to say that a 22-year-old or a 23-year-old can't be ready for marriage? Arie can joke about age all he wants (and it's nice that he can make fun of himself), but let's see him put his money where his mouth is and let the age chips fall where they may.