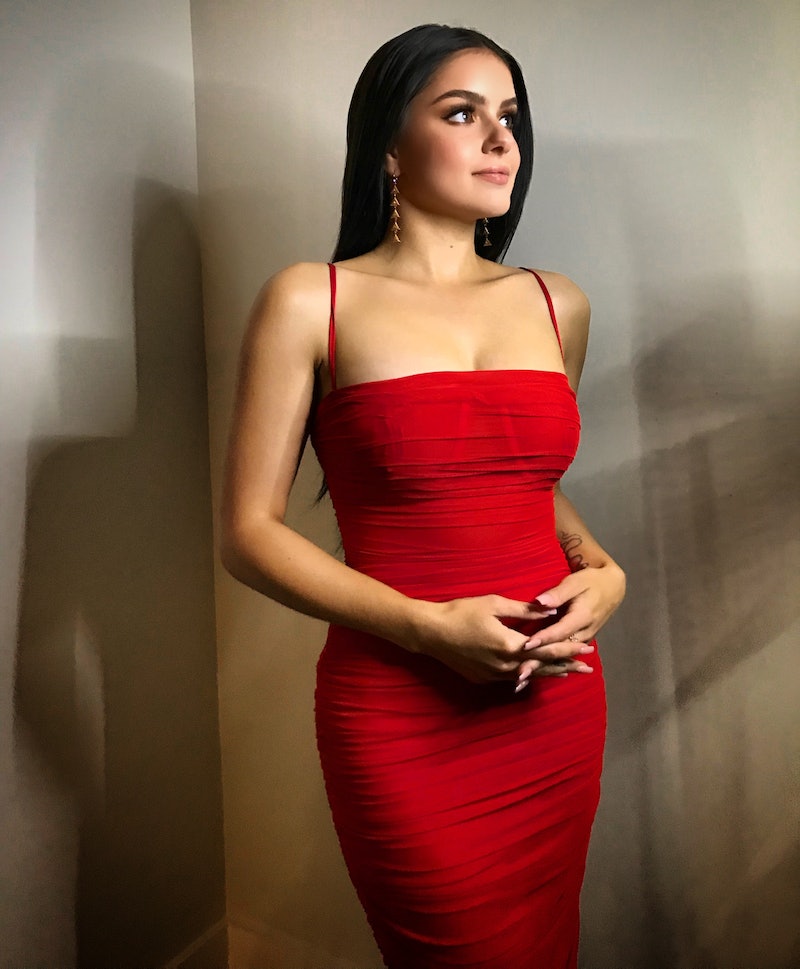 According to a new survey Bustle Digital Group conducted in partnership with Pollfish and She’s the First, an organization fights gender inequality through education, 52% of people ages 14-22 have experienced cyberbullying and online harassment. This is an issue Modern Family actor Ariel Winter knows about all too well; after entering the spotlight as a young teen, Winter was exposed to a high amount of online trolling that she's still learning how to ignore. In this as-told-to, Winter tells Bustle writer Brandi Neal how she deals with social media trolls, and shares the best advice she's ever received about believing in herself.

Before I was on Modern Family, being bullied on the internet was not really something I thought about. I don't think it was anything I was prepared for. It sucks that you have to prepare people to be bullied online. That it doesn't matter what you look like, who you are, what you do — it's going to happen regardless.

My experiences with online bullying began when I started Modern Family, around age 11 or 12, because that's when I started having social media. I developed quite early for my age, and anything I posted on social media, and any time I went out to events, people would post negative things about how I looked. About what type of person I must be if I'm dressing that "mature." There were all sorts of comments like that on my social media pages. As I got older, it continued. I got comments like, "Your nose looks weird," or, "Did she get plastic surgery on her face — she looks terrible."

Even if a comment is completely untrue, you start thinking about it. Like, am I really that way? When I was younger, I would look at the comments and be like, "OK, is there anything I can change? If a lot of people are saying this one specific thing, it must be true." I tried to change multiple things about my appearance when I was younger. It did absolutely nothing for me because people would just find something else to comment on. It hurt me.

People want to say cyberbullying doesn't affect them, but it does. It's never stopped bothering me. I used to respond to a lot of negative comments, and it just doesn't help. Somebody who's really kind to me on Instagram messaged me and said I spent so much time responding to the negative comments that I didn't spend any time responding to positive ones. I was just focusing on defending myself from the negative things people said about me — basically rewarding people who are just looking for a response. And the people who were being positive, they weren't getting any recognition for being supportive. That really hit me.

When I was younger, I spent so much time responding to negative comments because I didn't think about that link. I wanted to defend myself so I would feel like I had some sort of a power over it. That never resulted in anything positive for me. Now, as an adult, I realize I took other people's opinions into consideration too much. I realize how unimportant those comments are, and that the sole purpose of making them is to be recognized and rewarded with attention, and I don't want to reward people for anything negative.

If you change yourself based on someone's comments, they'll just find something else to comment on.

I've also come to realize that I'm not the type of person who wants to share everything on social media. Now, I like to keep some things to myself. I don't really need to post things to impress people. And I feel like that's a lot of what Instagram and Twitter is about. According to a new survey Bustle Digital Group conducted in partnership with Pollfish and She's the First, 53% of people aged 14-22 say the fear of online harassment influencers the way they use social media — so I know I'm not alone in wanting to take action to protect myself from this kind of harassment. I don't show everything I'm doing so I can feel like I have some sort of privacy.

Cyberbullies have used every single thing that they can against me on the internet — things that aren't true — and they just post it like it's nothing. They don't really think about the fact that I am a person. People on the internet see other people as if they're like The Sims. Something they can just talk about because they have no feelings or no emotions.

What really helps me when I feel down is being with my dogs. I also go to therapy — it's really helped me learn to think things over for myself. But when I look at the world and see people doing or saying terrible things, I look at my dogs and take in the good that they bring me, and I try to think of the good in the world.

I just did a guest spot on Law & Order: SVU (the best show ever), and I got some life-changing advice from Mariska Hargitay. She told me to ground myself as a woman and be confident in my own choices — to not let other things get in the way of that. She told me that I need to trust myself as an actor and as a human being. I need to be confident that I can make good choices. To give myself some credit and to actually listen to my own advice. That meant so much to me, and it's really changed my outlook on so many things.

Because at the end of the day, you need to think about how you want to feel about yourself. Make your own choices. Not choices influenced by somebody's comments on your Instagram page. If you change yourself based on someone's comments, they'll just find something else to comment on. You'll be miserable if you keep trying to change yourself based on other people's opinions.

If you are being harassed online, it's important to remember that oftentimes you don't know these people, they don't know you, they don't know who you are and if somebody is able to write those negative comments on somebody's page, clearly something is wrong with them. In fact, only 6% of respondents to BDG's survey admitted to bullying someone else online — so it's a really, really, small number of people being really, really loud. If your friends are the ones doing it, get rid of them. Surround yourself with people who care about and support you.

As I've gotten older, I've come to terms with the fact that you can't please everybody — you can't please anybody, really. Yes, being bullied on social media hurts, but I've learned that the only person I need to care about making happy is myself. Knowing that I have the ability to do that makes it a little easier.

More like this
Ashamed Of Your Screen Time Stats? Here's How To Change That
By Alexis Morillo
Learning To Love, Not Judge, The Lunchbox Wives Of TikTok
By Esther Zuckerman
How To Turn Off TikTok Profile Views So You Can Stalk Other Accounts In Secret
By Alexis Morillo
How To Curl Your Hair With Leggings, According To TikTok
By Carolyn Steber
Get Even More From Bustle — Sign Up For The Newsletter
From hair trends to relationship advice, our daily newsletter has everything you need to sound like a person who’s on TikTok, even if you aren’t.