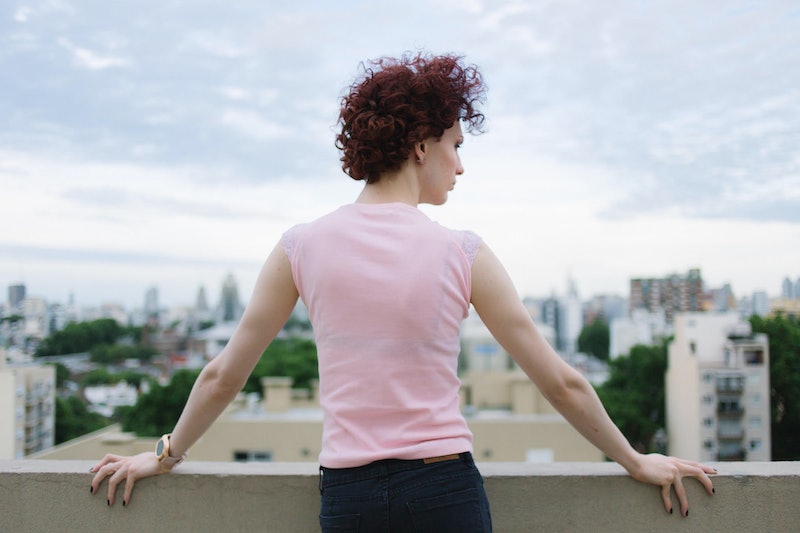 When Megan Ringel was 16 years old, she saved a stranger’s life by giving him CPR when he was unconscious from an overdose — she never expected the good deed to come back to haunt her. At first, she was rewarded for her heroism. Ringel received an award from the sheriff’s department and from the Red Cross Association, and she was featured in her local newspaper. But the story didn’t end there. After she shared the article on Facebook to encourage her friends to get CPR-certified, the online harassment began.

The kids at her high school had created an anonymous Facebook page where people would submit "confessions." But most of the posts consisted of bullying, harassment, and degrading comments. The posts accused Ringel of saving the man for attention. Her peers said that she should have let him die because he was on drugs and that nobody cared that she saved someone’s life. For weeks, she was the subject of the page. “People would wish death upon me, call me names, say that I was looking for attention and that I went out of my way to help someone just for my pure benefit,” Ringel says.

The posts crushed her. She started missing school, going in late or leaving early just so she didn’t have to be around people she felt were tearing her down. But since the comments were online, she always had access to them, and she became obsessed with checking what people were posting. “My self-worth and my state of mind started to crumble,” Ringel says.

Eventually, Ringel contacted her school administrators to see if something could be done. But the dean of her high school said that there was nothing they could do about it because it was online. He told her, “Kids will be kids.” The website was never taken down, and Ringel was even included in the yearbook under the “Most Likely To Do It For Attention” superlative.

Unfortunately, Ringel is not alone in her experience with online bullying. According to a 2017 report by the Pew Research Center, 41% of Americans have been personally subjected to harassing behavior online. These behaviors include offensive name-calling, intentional efforts to embarrass someone, physical threats, stalking, harassment over a sustained period of time, and sexual harassment. Younger adults seem to fare the worst, with 67% of 18-to 29-year-olds reporting that they have been the target of any of these behaviors.

Although bullies are nothing new, the rise of smartphones and social media have made it easier for people to take their harassment online. Multiple studies support that the more a young person uses their smartphones, the more likely they are to be bullied or harassed. There have even been celebrities who have left social media because their online harassment has gotten so bad, including model and actress Ruby Rose, actress Millie Bobbie Brown, and Modern Family star Ariel Winter.

It’s this accessibility — and sometimes, anonymity — that makes online harassment so rampant. “Cyberbullying is popular because it’s behind a screen and gives the bully instant gratification,” Ross Ellis, CEO and founder of STOMP Out Bullying, an anti-bullying nonprofit, tells Bustle.

Cyberbulling Can Have Serious Consequences On A Person's Mental Health

When harassment occurs online, it can cause just as much shame, vulnerability, helplessness, and social isolation as it can in person, Dr. Gene Beresin, MD, executive director of The Clay Center for Young Healthy Minds at Massachusetts General Hospital, tells Bustle. Victims of bullying can endure an immediate emotional impact, including shock, anxiety, depression, shame, fear, low self-esteem, says Dr. Beresin. They often experience physical symptoms as well, such as stomach aches, headaches, and panic attacks.

Online bullying differs from other forms of bullying in that the shaming tends to be more public, reaches a large audience, and feels more permanent and persistent. This can cause the negative effects to often be more long-lasting and impactful. “The power of shame, day after day, increases the emotional impact of the bullying,” Dr. Beresin says. “Once generated, you can’t take an online message back. And it is communicated 24 hours a day, so the victim cannot get relief easily. The message and the emotional impact are both persistent.”

For Ringel, her self-esteem began to crumble. “I was embarrassed to volunteer, go to work, and be myself because, somehow, my peers convinced me that being nice and kind and helping others was only going to reflect poorly on me,” she says. She started trying to make herself “smaller” to avoid any negative attention. “I stayed inside, stopped seeing my friends, changed my attitude with my family members, and stopped going to activities I enjoyed going to.”

Online bullying often causes victims to avoid situations that will expose them to those who have witnessed the bullying, such as school, work, or social events. “A pattern of avoidance and isolation can be very detrimental over time, contributing to depression and anxiety,” Dr. Lindsay Henderson, PsyD, a psychologist who treats patients virtually via telehealth app, LiveHealth Online, tells Bustle.

A 2012 study by the National Institute of Child Health and Human Development found that cyber victims were at higher risk for depression than were cyberbullies or bully-victims. Research done on adolescents has also found that cyberbullying can increase the risk of anger disorders and disassociation symptoms.

In some instances, cyberbullying can become so harmful, it can even lead to suicide. Many will remember Tyler Clementi, the Rutgers University student who died by suicide. His roommate had used a webcam to record Clementi kissing a man in their dorm room and posted about what happened on Twitter, which lead to Clementi’s death by suicide. The incident provoked a national dialogue on cyberbullying, and it even inspired Monica Lewinsky, another victim of online harassment, to speak out against cyberbullying in a TED talk of her own.

Still, online harassment has enough of an impact that it can cause long-term consequences for those who experience it. Ringel began coping in unhealthy ways, including restricting her diet, self-injuring, and misusing pain pills. Months after her online bullying began, she checked into a cognitive behavioral rehabilitation center for a five-month-long treatment.

“This program had a ton of benefits for me and saved my life,” Ringel says. “It was daily group therapy that helped me the most. I was with a group of people that were all going through similar things. This made me feel like I wasn’t alone.”

Those Who Experience Cyberbullying Can Find Help

Cognitive Behavioral Therapy (CBT) focuses on directly addressing emotions and learning healthy coping mechanisms for a patient's emotions and experiences. It also gives victims the tools to deal with other similar triggers in the future. A 2016 study published in the International Journal of High Risk Behaviors & Addiction found that cognitive-behavioral group therapy reduced anxiety, depression, and physical complaints in student victims of bullying.

In her own therapy, Ringel focused on the positive attributions about herself, learned to look at things objectively, and recognized that she was not the only person going through this, which gave her much solace. “We talked a lot about how we internalize other people’s behavior and put it all on our own shoulders,” Ringel says. She also participated in art therapy and music therapy.

“Being able to train my brain and my thoughts to think differently saved my life,” Ringel says. “As an adult and going through traumatic events (my first long-term relationship ending, being forced to drop out of college, and moving across the country to be flooded by Harvey), I still use the skills I learned in therapy.”

Another important way cyberbullying-victims can move forward from their experience is to take some time offline, and this includes moving away from social media, clinical psychologist Dr. John Mayer tells Bustle. Participating in real-world activities can help build self-esteem and confidence.

Empowering young people and building self-esteem is also the focus at anti-bullying nonprofit STOMP Out Bullying. “The more empowered and self-confident a teen is, the better they will survive [bullying],” Ellis says. “They need to understand that is not their fault. And by showing the bully that you don’t care what they say or do is the best tactic a victim can have.”

How Social Media Is Helping To Enact Change

But the responsibility to cope with online bullying doesn’t just fall to the victims. Social media websites have also been implementing new policies to help combat online bullying. YouTube has vowed to crack down on “toxic videos." Late last year, Facebook released new tools aimed at protecting people from bullying and harassment, including the ability to hide or delete multiple comments at once, and the ability to report bullying and harassment on behalf of other users. They’re also working on using automation to detect harassment, which includes Instagram as well.

"We want to give people control to prevent unwanted, offensive or hurtful experiences on Facebook, so we will continue to build better tools, improve our policies, and partner with experts to create a safer Facebook experience," Facebook spokesperson Emily Cain, tells Bustle.

Twitter has also pledged to take a more aggressive stance on online harassment. According to a Twitter spokesperson, in 2018, they made more than 70 changes to their product, policies and processes to build a healthier Twitter. "Our teams focused on increasing transparency — both in our app and through partnerships — to build understanding and find ways to measure our work," the spokesperson tells Bustle. "We also took a number of steps to help people see high-quality information on Twitter, strengthening our sign-up processes, account verification, and the ways our data can be accessed."

Despite these tactics, some young adults still feel that these social media sites are failing them. According to the Pew Research Center, 66% of users have unfavorable views of how these websites address harassment and cyberbullying. They feel even more negatively about how politicians tackle these issues, with 79% of teens saying elected officials are doing only a fair or poor job of addressing this problem.

“If all these teenagers were feeling the same way I was feeling, and people were treating us the same way, how could it all be on me?”

When it comes to feeling protected, emotional and social support from friends and family is important to help mitigate harm from online abuse.

“Group meetings in school, counseling sessions, and in the community may be useful,” Dr. Beresin says. “When the community is taking action to prevent bullying, victims often feel a great sense of relief.”

This was true for Ringel, who found that having people around her who understood how it felt to be bullied and mistreated helped her tremendously. “If all these teenagers were feeling the same way I was feeling, and people were treating us the same way, how could it all be on me?” she said.

Ringel’s bullying didn’t stop until she was a senior in high school, but even in her adult life, she has still encountered online harassment. The difference is, she now feels equipped with the tools to handle it. This was put to test last year, when a middle-aged woman began harassing her over email, defaming the nonprofit organization Ringel directs.

“I was 20 years old and was being bullied by a 45-year-old woman,” she says. “It still hurt as if I was a 15-year-old.” Instead of getting upset or falling into destructive behaviors, she simply ignored the woman. “I kept doing what I loved to do and stayed true to myself,” she says. And Ringel took the same approach that Ellis suggested. “Rise above the bully,” Ringel says. “All they want is a reaction and without one, they will get bored and move on.”