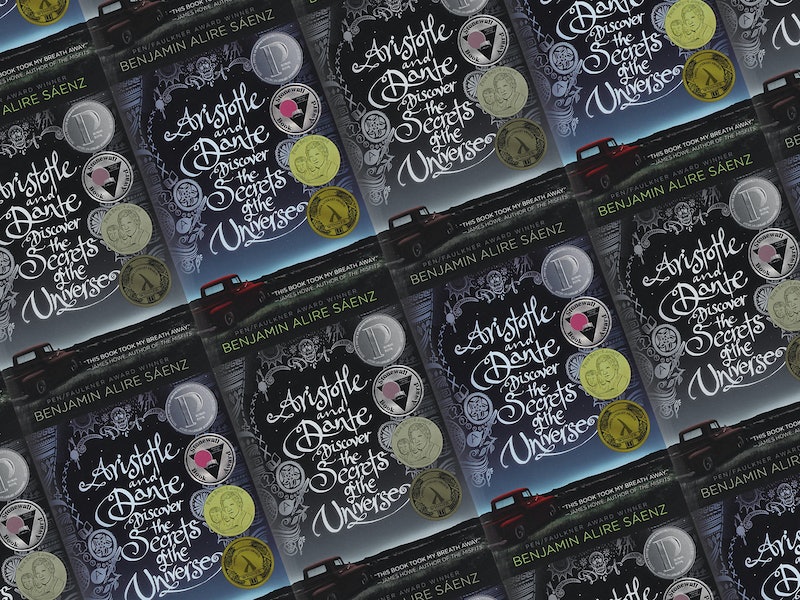 Bustle's I'm So Jealous series is dedicated to the books, TV shows, movies, podcasts, and more that super fans are so jealous someone else gets to experience for the first time. In this installment, Kerri Jarema writes about Benjamin Alire Saenz's YA novel Aristotle and Dante Discover the Secrets of the Universe.

The season dawned hot and humid, the sticky slowness of June stretched lazily out before me, and I was feeling nostalgic. I tend to dive into pools of memory during the warm-weather months. I'm close enough (or at least I tell myself that I am) to those carefree school breaks of yore that somewhere deep-down, I feel like I can still capture the feeling that something life-changing could happen at any moment when it's summer.

Perhaps nostalgia was why I picked up Aristotle and Dante Discover the Secrets of the Universe in 2014. After all, you don't just listen to albums with songs like "There's a Good Reason These Tables Are Numbered Honey, You Just Haven't Thought Of It Yet" at the formative age of 16 if you don't like divining hidden meanings out of elaborate titles. So when I spotted Alire Saenz's lyrically-named novel at bookstore, I was intrigued.

Aristotle and Dante opens in the summer of 1987, on a sweltering day in El Paso, Texas. Aristotle goes to the pool, and it's there that he meets Dante, another Mexican-American teen. The boys connect instantly, but they couldn't be more different: Ari has a hard time with words, and with self-doubt; Dante is a sensitive dreamer who loves poetic quotes. Ari has a brother in prison, and a veteran father suffering from PTSD; Dante is just open-hearted enough to attempt to break down the walls Ari has built around himself.

For Ari, there are "different rules of summer." It's a time when two teen boys are able to roam free, with all the space they need to figure out who they are and what they want. They can fall asleep one summer night and wake up to a totally different world.

I might have already been feeling nostalgic when I picked up this book, but by the end, I was fully reminded of what makes memories of those long-ago summers so special in the first place. Alire Sáenz writes:

"Summers had a logic all their own and they always brought something out in me. Summer was supposed to be about freedom and youth and no school and possibilities and adventure and exploration. Summer was a book of hope. That's why I loved and hated summers. Because they made me want to believe.”

I am my past selves and my current selves all wrapped up in one head, with one beating heart. Those daydreams and wishes that I had as a teen? They're still there, though tamped down by my adult sensibilities. It was Ari and Dante who reminded me to embrace those youthful feelings of possibility, hope, and above all, human connection. Because in the summer, "you could sometimes find all the mysteries of the universe in someone's hand."

If you’re picking up Aristotle and Dante for the first time: Fully embrace those intense and all-encompassing teenage feelings you may have buried long ago. I promise, it will be worth it.

If you love it and want more of the same: Alire Sáenz's 2017 release, The Inexplicable Logic of My Life, is another poetic exploration of identity, friendship and family, which you're sure to love.

And if this book converts you into Alire Sáenz's biggest fan: Alire Sáenz announced in 2016 that he's working on an Aristotle and Dante sequel, currently titled There Will Be Other Summers.