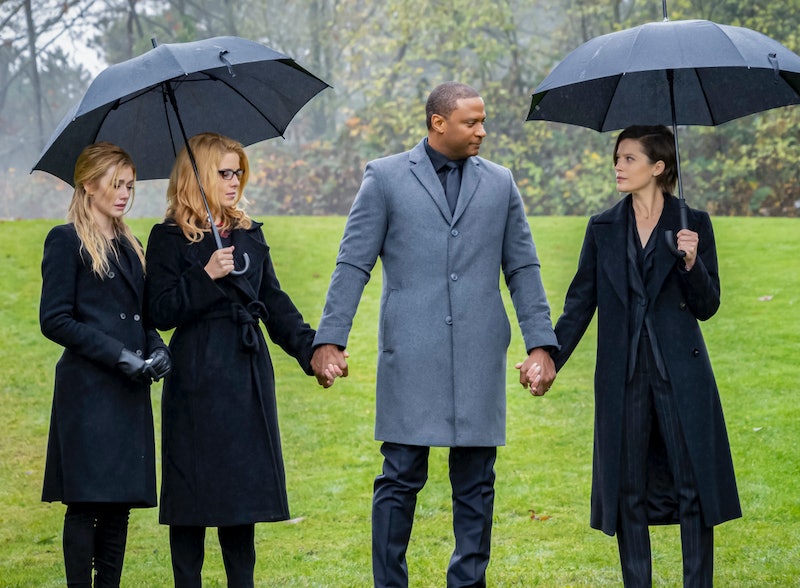 Now that Stephen Amell's Oliver Queen has officially taken his last breathe, Arrow, too, has come to an end. But for those still trying to process that Arrow won't return after Tuesday night's series finale, there is a bit of good news: a possible Canaries spinoff could still be coming.

Arrow's penultimate episode, "Green Arrow & the Canaries," served as backdoor pilot for a 2040-set show starring Katherine McNamara as Mia Queen/Green Arrow, Katie Cassidy as Laurel Lance, and Juliana Harkavy as Dinah Drake. Together, they make up the Canaries, a female vigilante group fighting crime in an overrun Star City. The CW has yet to officially green-light a spinoff, but as of September 2019, it was in development with Greg Berlanti, Sarah Schechter, Beth Schwartz, Marc Guggenheim, Jill Blankenship and Oscar Balderrama all executive-producing. Other potential characters include Bianca Bertinelli, who ScreenRant speculated is connected to the Huntress, and John Diggle's son J.J. Diggle, but few other details have been revealed.

One person you can expect not to see in a potential spinoff is Oliver — who, yes, is really, truly dead. Though we've seen Oliver die several times now, Schwartz — Arrow's showrunner — confirmed to The Hollywood Reporter that Oliver's death was "a decision that was made [a long time ago]" and that Oliver "is really dead this time."

"The whole point of this death and the culmination of what brings us to the crossover is that everything he's learned throughout the series and these past eight years has led him to this moment to give the ultimate hero's sacrifice," Schwartz told the outlet earlier this month. "And that's his life — to save everyone else. That's what a hero does. His journey has led him to make that ultimate sacrifice for his family, for his friends, for the other superheroes. And it just worked out in the timing of doing 'Crisis' that the story made sense."

The silver lining? If the Canaries spinoff comes to fruition, Oliver's legacy will live on in Mia.