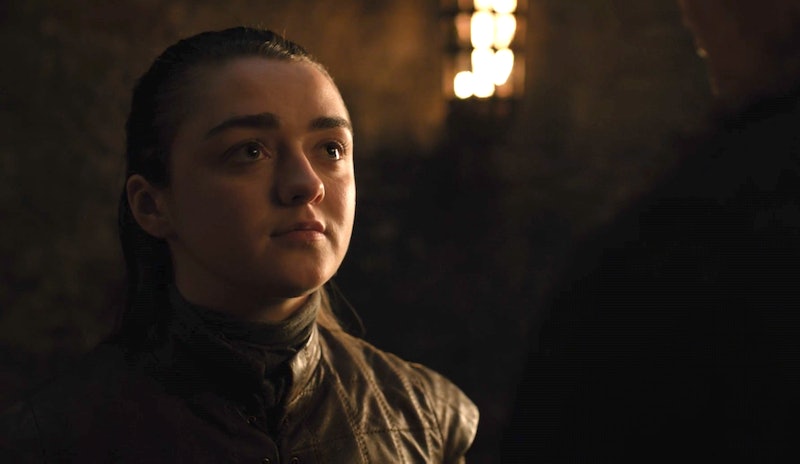 On the eve of a major battle, some people drink, some people get knighted, some people reveal secrets about their heritage, and some people have sex. Arya Stark was in that last category and considering we've watched her grow up onscreen, a ton of fans were wondering how old Arya is on Game of Thrones. It's all fine and good to be curious, but for Arya's age to be an issue because people can't handle this female character consensually losing her virginity is certifiably not OK.

Arya had sex with Gendry, who she's crushed on since Season 2, during the second episode of Season 8 ahead of the Night King arriving at Winterfell with his army of White Walkers. And while we've watched Maisie Williams play the character since she was a child, no one should feel weird about the choice she made her regarding her sexuality.

When Game of Thrones premiered back on April 17, 2011, Williams had just turned 14 since she was born on April 15, 1997 — and she was even younger when the show actually filmed. As for the character's age, TIME reported that Arya was 11 years old in the first season of Game of Thrones and with the pace of the show being one season equals one year, that makes Arya approximately 18 years old now. TIME also reported that her sexual partner Gendry is five years older than Arya in George R. R. Martin's book series. But considering he said he worked for the blacksmith Tobho Mott for 10 years, he probably is a bit older on the TV show. In real life, Gendry actor Joe Dempsie is 31 years old.

In the Season 1 finale, Gendry defended Arya when Hot Pie was bullying her (oh, how times have changed). Back then, she was posing as a young boy and headed to the Wall, but Gendry saw through the act. By Season 2, they got captured by the Lannisters and even back then, they had some sexual tension with Gendry calling Arya his "lady." So their sex scene was actually a long time coming.

Sex and Game of Thrones are pretty synonymous. (The show is responsible for the term "sexposition.") But Arya's sex scene caused some fans to freak out since they still see her as a young girl. Yet, viewers have accepted many other young women being raped (like, Sansa and Daenerys) and Arya being a murderer. So it's completely unfair to take issue with her having sex. After all, Arya is an 18-year-old woman who very understandably wanted "to know what it's like" before she died in the battle against the Night King with a man she's attracted to and trusts.

Showrunners David Benioff and Dan Weiss also gave Williams full control of the scene, according to an interview she gave to Entertainment Weekly. "David and Dan were like: 'You can show as much or as little as you want,'" Williams said. "So I kept myself pretty private." She also noted how Arya is finally beginning to feel human emotions again after becoming fairly immune to them. "It was really interesting because it's a very human relationship for Arya," Williams said.

"This is something she's stayed away from, an emotion we've never really seen her engage with. David and Dan were like, 'It's the end of the world, what else would you have her do?' ... So it was that moment where she says, 'We're probably going to die tomorrow, I want to know what this feels like before that happens.' It's interesting to see Arya be a bit more human, speak more normally about things people are scared of."

In an interview with Rolling Stone before the sex scene aired, Williams talked about the struggles of growing up on the show, like having to hide the fact that she had breasts. "I was becoming a woman," she reportedly said with a sigh. "I was, like, 15: 'I just wanna be a girl and have a boyfriend!' That was when it sucked. The first time they gave me a bra in my trailer, I was like, 'Yes! I'm a woman!'" She also spoke about Arya tapping into her feelings in Season 8 after repressing them for so long. So with those human emotions finally coming back to her, her wanting to experience sex makes total sense.

While Dempsie noted to EW that it was "slightly strange" for him to film the scene with Williams since he knew her when she was a child, Arya having sex should be a nonissue. This is especially true when so few Game of Thrones characters have had agency in their sexual decisions. Arya even acknowledged this by having Gendry take his own pants off since he told her the Red Woman had stripped him. There's no need for fans to react with disgust about someone they view as a "little girl" having sex. They should be proud that this woman had the opportunity to make an empowered choice about her sex life. Cause even ignoring everything that Arya has gone through, everyone deserves to get some with someone who is as respectful and attractive as Gendry.