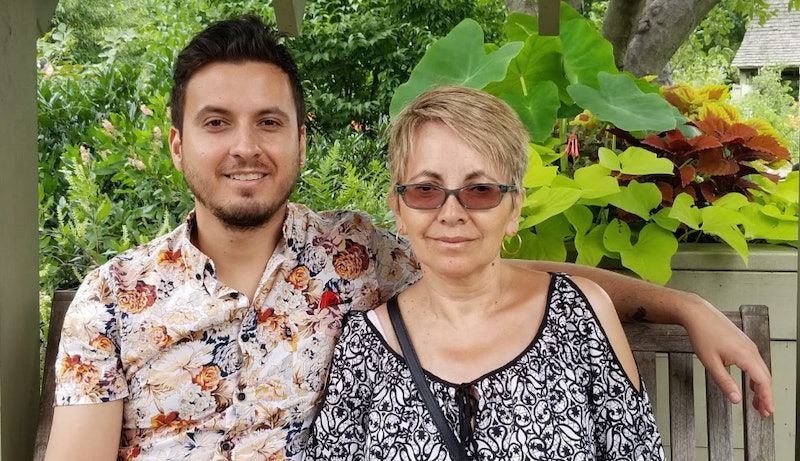 In this essay, Evangelina Moreno tells her son, writer Bogar Alonso, how gentrification in Chicago had an additional affect on her family when they were undocumented. This essay is part of Bustle's Whose City?, which opens up a conversation around gentrification in America.

“Welcome home.” I knew then, as the U.S. Airport Customs Officer greeted me back into the United States in the summer of 2017 after visiting my native Mexico for the first time after 25 years, that this side of the border had truly, officially, unquestionably become my home. And I realized then for the first time that no one else had a right to question where I came from anymore, because I was already there.

First, I left Mexico, moving to the United States in the spring of 1989, just shy of three years after the Immigration Reform and Control Act of 1986 was signed into law. Three of my brothers had become U.S. citizens because of that stroke of President Ronald Reagan's pen. I crossed the border with my then-2-year-old son, Bogar, to be with my then-husband, as we were going to start a life together in America. He was a U.S. citizen.

After three months of living together in Dallas, I decided to leave my husband. It was a difficult decision, especially as I was now carrying my second boy, Manuel, but it was one I made for my children as my husband became distant and started abusing drugs and seeing other women. Panicked, I weighed the idea of moving back to Mexico since I had no papers and no job prospects, but my brothers convinced me to stay. Where we were from in Mexico, job prospects were even bleaker. And I would provide an infinitely better future for my children in the United States.

With my brothers’ help, I moved to Chicago, living in their homes before I was able to move out with the boys, settling in Chicago's Wicker Park area. At that point, I was making $6,000 a year as a babysitter. Wicker Park then isn't what it is now. Though it's presently an affluent neighborhood for professionals, back then it was rundown and dangerous. But it was all we could afford, and still, it was our new home.

We stuck it out in the neighborhood, eventually settling in an apartment overlooking Ashland Avenue, and we saw the neighborhood change for the better. I no longer worried about my sons' safety (well, not as much, as I've always been a worrier). But, in February 2010, after living in that apartment for 10 years, we were asked to vacate by the landlord, a family friend. She gave us a month to move.

I still think about how we were uprooted from a lot of memories. I know my boys do, too.

She wanted the apartment for her daughter, and she would eventually rent it out to a long line of gentrifiers as rents skyrocketed.

We didn't fight the decision — there was nothing we could do, especially as undocumented immigrants. Plus, I was more focused on the stark reality of the situation: Without a credit history, without a social security number for background checks, and as a child caretaker who worked from home, I would struggle to find a new place that would rent to us.

For weeks we searched. My boys would plead to landlords and building managers in every which way. We offered two months' worth of rent upfront, three even, and were rejected nonetheless. I also began to worry that I would have to find a job in another line of work, something that would be difficult for me as I'm a longtime sufferer of rheumatoid arthritis, and caring for children is the only work I know in the United States.

Not to mention that rents were $1,200 for a two-bedroom in the area. By then, I was making a little more than $1,500 per month before taxes.

It was nerve-racking, but I knew that we would get through it together. I began to think of all the immigrants like me out there, many in worse situations. They were scraping by somehow, and so would we.

By sheer luck, we eventually found another apartment through an acquaintance, a place where I still live to this day. It's closer to the Bucktown area, so not far from where we last lived. I like it, but I still think about how we were uprooted from a lot of memories. I know my boys do, too.

In our old home, I saw them graduate from high school, saw them win martial arts tournaments, saw them win over the affection of girls, and saw them ready themselves as men-in-the-making for the world.

Our Wicker Park apartment was where I raised not just Bogar and Manuel, but where I helped raise a majority of the 137 children I've looked after in my career. One hundred and thirty-seven American children. Some of them even have their own children now. And some of them consider me family, and I them.

I understand that many people do not want people like me, Mexicans, here. That's been made clear. And I see their point. I might even understand why. And sure, people are born into countries. But countries are also built. Just like homes are built. In my case, I've built what I have. I've also paid my dues and paid the fees and penalties necessary to become a permanent resident in the country I call home. A home I share with my family, and a home that hasn't come easy but that I treasure, because it's mine.

As told to Bogar Alonso. This interview was originally conducted in Spanish, and translated into English.

My "Perfect Apartment" Can't Exist While Gentrification Does