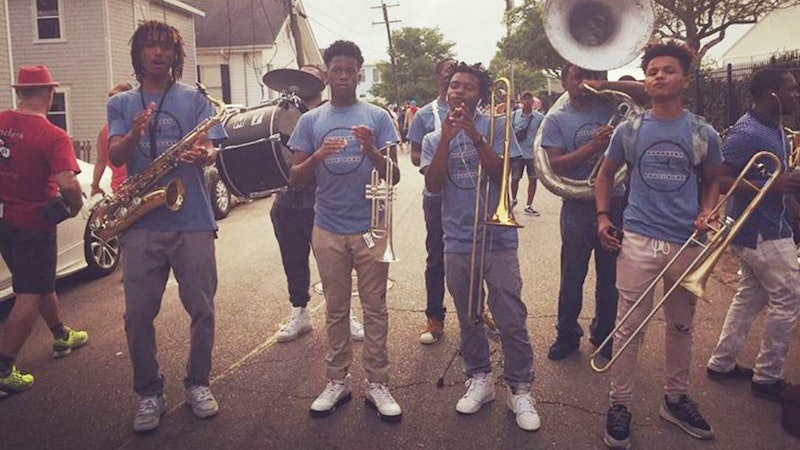 In this essay, Sola Akinlana explains how gentrification in New Orleans is erasing the very culture of the city — and how young people are fighting back. This essay is part of Bustle's Whose City?, which opens up a conversation around gentrification in America.

The first thing that people mention when they hear where I’m from is Mardi Gras. The holiday has made New Orleans infamous, with thousands pouring into the city every year to participate in the celebration. But the treasured culture of Mardi Gras, and New Orleans in general, has attracted a new wave of people — who we call “transplants” — moving in and calling our city home.

Mardi Gras, also known as Fat Tuesday, is a celebration before the Christian observance of Lent. It is very important in our city, which is heavy with Catholic culture. Second lines, parades, Mardi Gras Indians — the most decadent of New Orleans culture is put on display for the holiday. All over the country, stories of Mardi Gras are told — from the all-Black Zulu parade to the crowds of tourists on Bourbon Street. Yet for many of our newest residents, they act as if our culture is to be celebrated only during Mardi Gras, and limited or disrespected at any other time.

Street music is part of the essence of New Orleans, both during Mardi Gras and every day. Live music is as inherent to the culture of the French Quarter as beignets or pralines. Black musicians make up a majority of the brass bands that bring joyful music to our communities. Bands like the Hundreds, One Shot, and Big 6 allow young New Orleanians to be on the streets for a positive reason.

The author. Courtesy of Sola Akinlana

Having grown up in New Orleans, watching the brass bands sparks feelings of pride and celebration. As you hear the bass drum hold the beat, you can’t help but move. It makes even the most reserved person dance. For me, it is brass band music that defined school concerts, second lines, and every event I attended, where it’s played to say, “You ain’t gotta go home, but you gotta get the hell up outta here.”

The music feels like home, literally. It would ring through my house every time my brother’s band practiced in our backyard. But recently, our musicians have been under attack. Bands that have been local fixtures for years are being challenged with noise complaints and police orders to vacate their usual areas. The very same musicians who provide memories for tourists during Mardi Gras are being punished for it when that celebration is over.

Despite the danger of being Black on the street, our artists are still going out and playing music.

In a recent incident that gained media attention, a young musician was tackled and arrested on Frenchman Street, one of our most popular streets for live music. The trumpet player was playing with other members of The Young Fellaz, who were approached by the New Orleans Police Department because of a noise complaint from a white business owner who recently moved to the area. Attacks like this on the Black musicians of our city are especially poignant in today’s “hands up, don’t shoot” climate, where any run-in with law enforcement can be life-changing for people of color. And the problem that has been plaguing Black musicians in my city recently reached closer to my own home.

My brothers are part of the Hundreds brass band. Earlier this year, they were harassed by law enforcement and told to leave a spot where they’ve played for years. A transplant to the city called the police to register a noise complaint against them, right outside the grounds of the New Orleans Jazz & Heritage Fest. Jazz Fest is arguably the city’s biggest music and culture festival, and bands play all across the city, drawing massive crowds each year. In a subsequent news story about the incident, my brother spoke about his frustration over his livelihood being threatened because he was playing music — music that is central to the city’s culture.

"I was just more frustrated than anything else," my brother Efuntola said. "I use Jazz Fest in my daily life to pay bills and things like that, so I need that money."

It’s not just demonstrations of our culture that are being challenged here. Because of high tourism for these events that are centered around our city’s culture, our neighborhoods are being taken right out from under our feet.

With the rise of homesharing sites like Airbnb, more of the privileged and wealthy are buying homes in once-predominantly Black neighborhoods like Treme and Gentilly, where I grew up. These homes are rented to tourists and drive up the cost of living, displacing families and businesses that have populated these neighborhoods for generations. When I was young, our neighborhood was filled with the children I played with after school. Now, my youngest brother has no neighborhood friends. Instead, our neighborhood houses tourists and transplants that we see on their daily jogs.

The young people of New Orleans are resisting. Despite the danger of being Black on the street, our artists are still going out and playing music, defying the gentrifiers who would suppress them. Young New Orleanians were furious when the Young Fellaz trumpet player was pinned to the ground and arrested. They took to social media to condemn the business owner who called the police as harmful to our culture, and the story went viral. The next day, the undaunted band members were back in their usual spot, playing to a large gathering of the community that came out to show solidarity.

When my brother's band had the police called on them, neighbors tried talking to the police. One neighbor offered her yard for them to play in. "It was cool that the community came together to try to preserve the culture we have left in the city," Efuntola told the news station.

Young New Orleanians are also using social media to keep our culture alive and educate one another on the dangers of neighborhood erosion to home rentals. Two Instagram pages run by young New Orleanians, @noirnnola and @nolablackdollars_, are devoted to sharing the reality of New Orleans gentrification and promoting Black businesses and real estate. It was on noirnnola.com that New Orleans activist Cierra Chenier wrote, “To be Black in this new, New Orleans is an act of protest. Our very existence is resistance.”

We are sharing knowledge, speaking up on social media, and showing up in solidarity. The culture I grew up in will not be taken away from us. We’re fighting for it.

I Was Undocumented When I Was Forced From My Home, But I Still Made A Life For My Family

My "Perfect Apartment" Can't Exist While Gentrification Does