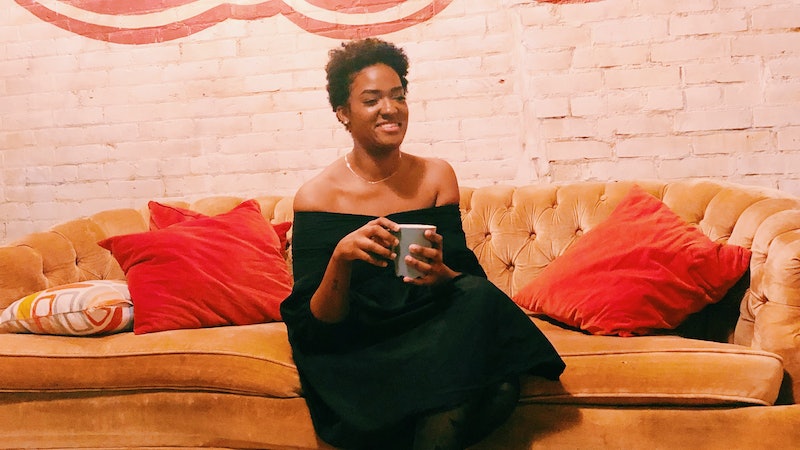 In this essay, Ymani Wince explains how she struggles with her experience of gentrification in St. Louis. This essay is part of Bustle's Whose City?, which opens up a conversation around gentrification in America.

I’m not a person who moved from place to place growing up. My dad provided me with the stability that enabled me to stay in one school district until I went to college. Florissant, Missouri, is a predictable neighborhood in St. Louis’ North County. Most of the kids my age spent time after school at McDonald’s and Target, and we went to iHOP after proms and homecomings. I walked to school in seventh and eighth grades, and had a few friends from school who lived on my street.

A year after college, I moved into the city, to St. Louis’ south side. I wanted my perfect apartment to be close to work, secure, affordable, and safe.

I happened to stumble upon a listing on Zillow that seemed perfect. It was a brand new project in the Gate District, a neighborhood with ongoing redevelopment. There were modern Tetris-like houses on the block, freshly cut grass, restaurants on both ends of the street, and even an Aveda salon within walking distance.

When the property manager showed the space to me, I loved it. I made plans to withdraw the security deposit from my savings account the same day. Every unit was renovated with granite countertops, brand new cabinetry and appliances, and gated entry. But as I walked through the space, it struck me as odd that of the 30 units available, all of them were one bedrooms.

“Is this a new development?” I asked the chic property owner. He took a moment to respond.

“No, we bought the space from its previous owner,” he replied. “The people who lived here before had to leave within four months.” He went back to telling me about the community’s amenities, but I couldn’t get the thought out of my mind.

I asked him if some of the residents would come back and how much their rent would change.

“Well, it used to be single living for elderly low-income residents,” he responded. At the look on my face he quickly added, “But we offered all of them the chance to come back after renovations were done.”

I did the math in my head. I knew immediately that for the price I was willing to pay, that low-income elderly residents would not have the opportunity to return even if they wanted to. Still, I excitedly showed my dad the apartment and hoped for his approval.

I couldn’t stop thinking of the displaced residents, wondering how their lives had changed and knowing that I was benefiting from their displacement. Yet, instead of looking for another place to live, when my dad gave me the green light to sign the lease, I moved in.

In St. Louis, we have a running joke. “What high school did you go to?” we’ll ask one another. After the answer, the conversation continues, but biases are forming. The answer to the question is a marker of economic class. Where you went to high school determines what kind of upbringing you most likely had, how much money your parents make, and, ultimately, who you are. North County — which is where Ferguson and Florissant, where I grew up, are located — is known for its working, middle-class families and strong high school sports legacies.

In the city, there are run-down housing projects and abandoned schools. The apartment where I moved is in the city. The south side has not always had a positive reputation, which made my newly revitalized neighborhood feel out of place.

Through all of this, I’ve learned that my “perfect apartment” does not exist.

St. Louis has a real issue with crime and poverty, and the two go hand in hand. I believe many of my city’s issues stem from racism — and the skeletons St. Louis refuses to shake from the closet.

Revitalization is gentrification. While my neighborhood has been transformed from a dilapidated area with low-income housing to a hip place to live, it displaced its residents to impoverished areas. The city is a place where millennials like myself can afford to live in revitalized areas, but there are also neighborhoods such as North St. Louis, where almost 50% of residents do not have access to the internet due to lack of affordability.

According to a USC research study, when white neighborhoods experience economic growth, white people continue to live there. But when minority neighborhoods experience that same growth, it draws more white people in, forcing people of color out. It’s been a year since I moved into my apartment, and I still harbor feelings of confusion and guilt knowing that people who look like me were displaced and that I inadvertently played a role in that. Through all of this, I’ve learned that my “perfect apartment” does not exist.

There were three $300,000 houses built on my block in the past year, yet there are also people on my block living without homes. There are serious inequities between public schools, so much so that many schools in the St. Louis Public School System have been closed and abandoned. One former school on my street was turned into loft apartments.

I’ve become curious about my place in the system, and how I can help. I learned that in my city many Black residents have to jump through hoops with the local government in order to buy property, get loans for businesses, and try to make an entrepreneurial living. So over the last year, I’ve practiced spending money locally. One of my favorite things to do is visit the Black-owned soul food restaurant that’s within walking distance from my apartment. They’ve been in the neighborhood for 50 years now, and it’s important to me that they stay. I’m also making a strong effort to visit businesses in other St. Louis neighborhoods to make sure my dollars support Black communities.

If there’s one thing that gentrification has taught me, it's this: I cannot separate myself from it. And if I do nothing, I'm part of the problem. That’s what has allowed St. Louis to be segregated for so long. I didn’t move into an apartment in my neighborhood until the area was gentrified, yes. But now that I’m here, it’s important for me — and everyone — to do the work that will allow for marginalized communities to have the same growth and opportunity other neighborhoods have had.

I Was Undocumented When I Was Forced From My Home, But I Still Made A Life For My Family

More like this
Chris Kaba's Family Continue Fight For Justice After Viewing Police Bodycam Footage
By Sophie McEvoy
Women Around The World Are Cutting Their Hair In Solidarity With Mahsa Amini
By Darshita Goyal
William & Kate Shared How Their Kids Are Doing As They Mourn The Queen
By Stephanie Topacio Long
An Honest Review of MeUndies Boxers, According To A Non-Binary Person
By Megan Lasher
Get Even More From Bustle — Sign Up For The Newsletter