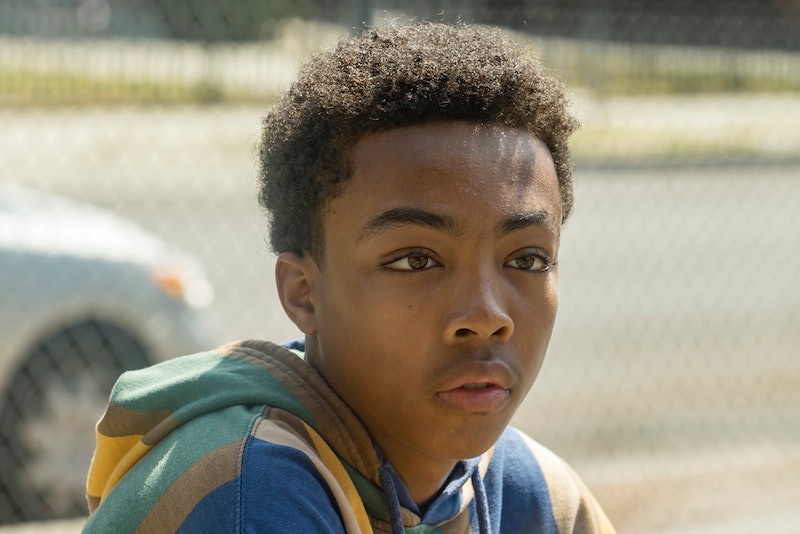 The teaser for the This Is Us Season 4 informed viewers that they "didn't know" anything about where the Pearson's family story was headed. That turned out to be very, very true as the premiere introduced a handful of new characters, all somehow connected to series' core cast. While there are still some questions to be answered about most of the new characters, Asante Blackk's character Malik might have the most straightforward connection (and timeline) to the Pearson clan.

On the show, Blackk plays a young teen father who falls for Deja, Beth and Randall's foster child, at a BBQ. The feelings were adorably mutual, and Malik is very obviously going to be a love interest for Deja — although some fans have already posited that the show is playing with time again and that Malik's daughter might be Deja's kid, meaning that the BBQ scene at the end of the premiere happens in the past. It wouldn't be the first time the show toyed with viewers' ideas of time and space, but that theory doesn't check out for one major reason; there is no way Deja would have a child and Beth and Randall wouldn't attempt to be a part of its life, and in the show, it very clearly looks like Malik and his parents (Omar Epps and Marsha Stephanie Blake) have sole custody of the baby.

Though he has been acting from a young age, according to the Baltimore Sun, This Is Us is one of his first major roles. Although it has been a busy year for the actor, who, fun fact, is Samira Wiley's nephew. Blackk was recently nominated for a 2019 Emmy award for his role in Ava DuVernay's When They See Us docuseries about the Central Park Five's wrongful incarceration. But depending on where his This Is Us story is headed, the NBC drama might make him a household name soon enough.

This Is Us showrunner Dan Fogelman told The Hollywood Reporter that the road ahead is not necessarily smooth for Deja and Malik, though the drama mainly stems from when Randall and Beth meet Malik's parents on a double date and not so much the two teens. Fogelman teased that the upcoming spotlight episode "deals with perception, it deals with class, it deals with race in a really interesting way." For Malik and Deja, though, it's all love. "But for the kids, there's stuff coming that is so romantic and I'm so excited about it just purely watching these two," the showrunner added.

Blackk has definitely landed in the right place judging from his comments on his career goals in Hollywood Life. "I just really want to keep on doing great projects that inspire great projects, that move people, that heal people. Great projects that really get people talking and change their sense of perspective on things. I just want to be able to shine my light of the world through this medium of ours that I’m completely in love with," he said.

With legions of This Is Us fans turning in each week to see where Malik and Deja end up, he can easily accomplish that goal.