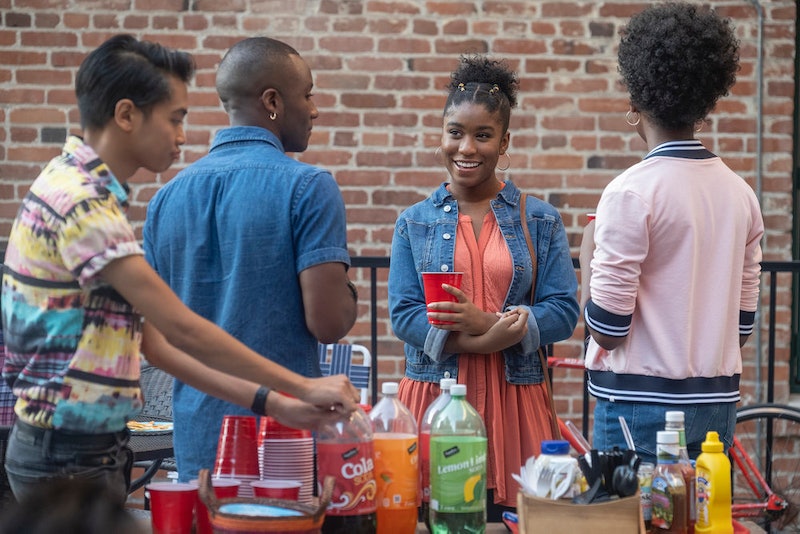 This Is Us introduced a lot of new characters during the Season 4 premiere. While each character eventually established some sort of a connection to a member of the Pearson clan by the end of the episode, their stories have already sparked some major fan theories. This is especially true in regards to a This Is Us theory about Malik and Deja that may just be wild enough to be true and will make viewers look at the premiere in a totally different light.

Several fans have started speculating that Deja is the mom of Malik's child. Typically, this idea wouldn't make a whole lot of sense, given that viewers saw Deja get introduced to Malik later in the episode — long after he'd already been shown taking care of his adorable baby girl. However, this series has a longstanding reputation of playing with multiple timelines, which is why some fans like @HillTempleton believe that the Deja and Malik scene was actually a flashback and not part of Malik's present-day timeline.

It wouldn't be the first time This Is Us has used varying timelines to trick viewers — remember that series premiere twist?!?! — so it's definitely a solid possibility. Malik is never shown mentioning his daughter while at the party, further indicating that this theory holds some weight.

But like with any good prediction, there are a few holes in this theory. For starters, Malik was interested in going to a barbecue at the start of the episode and needed one of his parents to babysit in order for him to attend. A barbecue is also where Malik and Deja meet for the first time. Sure, it's possible that these could be two separate barbecue events, but the storyline for these characters seems to be happening in chronological order. Then again, Malik seemed super loose and easy flipping burgers at the party, so it could be a pre-baby moment.

But the most convincing argument that this theory might not be true is that Randall, Beth, and Deja don't appear to be involved in the baby's life at all. If this really was Deja's child, you know the Pearsons would be all over that. Malik's parents seem to be his only source of support, so odds are that Deja meets Malik when he's already a single father.

Series creator Dan Fogelman has yet to address this specific theory, however, the recent comments he made during an interview with Entertainment Weekly seem to suggest that this prediction won't prove to be true and that Malik is a father prior to ever setting eyes on Deja.

Fogelman discussed how the storyline will explore Deja and Malik's relationship as well as the impact it will have on Randall. "The basic, simple fact of his daughter becoming interested in a young man who has a child and what that might do to Randall and Beth ... it’s one of the things I’m most excited about for our series this season," Fogelman told EW.

So as interesting as the theory sounds, there's little hope in seeing it play out. The mother of Malik's child still remains unknown, but odds are that it isn't Deja. Though, when it comes to this show, never say never.