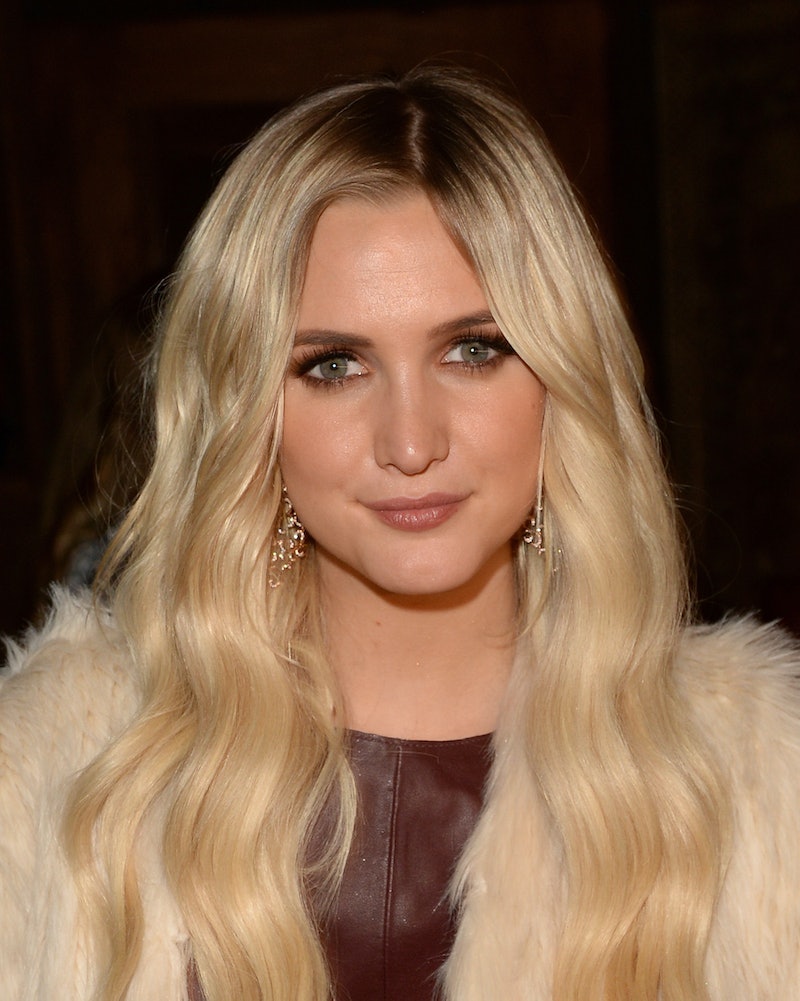 Ashlee Simpson hasn't released new music in years, and she doesn't often talk about her early 2000s fame, the fame that brought her reality show fame courtesy of MTV's The Ashlee Simpson Show, a hit record Autobiography (2004), and one disastrous, but memorable, performance on Saturday Night Live. And, while her new E! reality series, ASHLEE+EVAN, is a glimpse into Simpson's life now, in 2018, it will also give everyone a chance to revisit the early 2000s. And based on Ashlee Simpson's comments on her SNL lip-sync blunder from 2004, the "Pieces of Me" singer isn't shy about looking back at past mistakes.

"It's definitely not difficult to talk about, Simpson told E! News when asked about the live performance that shocked viewers when she was caught lip-syncing on the famously live show. Looking back, Simpson doesn't seem embarrassed or apologetic. She said:

Those words could easily apply to everyone who made a mistake back in 2004 — and who didn't? Almost everyone wore UGG boots and trucker hats back then, so most people probably look back on that time with at least a little remorse. Then again, not everyone made national headlines that year for one of the most awkward Saturday Night Live musical performances ever. As you'll probably remember, after performing "Pieces of Me" earlier in the show, Simpson took the stage to perform again, only to have the track of "Pieces Of Me" start playing. Simpson stood awkwardly on stage before breaking down into a hoe-down dance.

Like other performers caught lip synching before her, Simpson initially responded at the time by blaming the incident on her tour schedule's stress on her voice. According to the Today Show, Simpson then took responsibility and apologized on her website, "I’ll hold my head high and say I think it was silly of me to do it, silly of me to blame the band, I was just so f***ing embarrassed," Then she added, “But I don’t think it did me much harm, and people will see that soon.”

Simpson turned out to be right when she predicted that the SNL faux pas wouldn't hinder her carer, because almost exactly a year after it she released her second studio album, I Am Me. That album had two songs on the Billboard Hot 100, "Boyfriend" and "L.O.V.E.," so clearly Simpson did well for herself even after getting caught lip synching.

The singer did eventually step away from the spotlight later, though, as she hasn't released an album since 2008. That means it's been a full 10 years since Simpson has come out with new music, but that definitely may change. Her new show, ASHLEE+EVAN will chronicle the the former's return to the recording studio along with her life with husband, and performer, Evan Ross. In the trailer for the show, Ross says, "This is the right time for us to work on our music," and it shows the two in a recording studio together. So, it certainly seems like the singer is ready to get back behind the mic when the show premieres on Sept. 9.

Regardless of what Simpson's future music career may bring, at least you can rest easy knowing that she doesn't worry about her past misstep. Let that inspire you to forgive yourself for whatever happened in your life back in 2004.