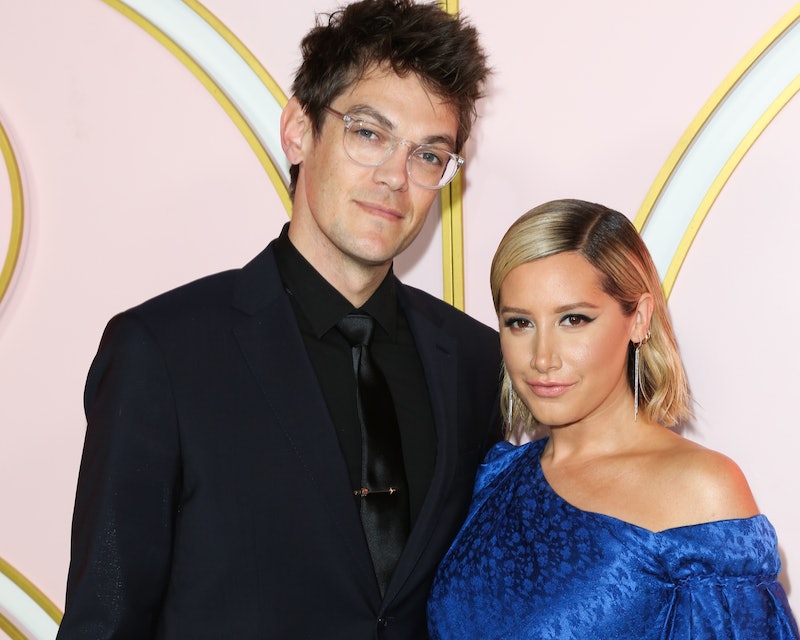 Sharpay Evans might be the most fabulous character to hit the Disney Channel, but not everyone is a fan of her over-the-top style. Ashley Tisdale watched High School Musical 2 with her husband, Christopher French on Dec. 27, and the actor revealed on her Instagram Story that it was the first time her musician beau had ever seen any of the Disney Channel classics. However, while Tisdale and HSM fans everywhere have fond memories of Sharpay and her summery musical numbers, French didn't appear to be much of a fan.

"Does anybody know what this is? Because I'm subjecting my husband to watch it. He's never seen any of them," Tisdale told her followers in an Instagram Story, before showing the opening credits to High School Musical 2 on her television. The actor then showed a skeptical-looking French sitting on the couch, clearly enjoying Sharpay's grand entrance a lot less that Tisdale did. "How cool am I?" Tisdale joked at one point, before laughing at the "yellow hair" that she rocked as East High's resident musical theater diva.

Though tweens everywhere wanted to emulate Sharpay's look in the late 2000s, French was clearly not as impressed by her fashion-forward looks. "Would you have dated me [then]?" Tisdale asked her husband, and the pair burst out laughing before she added, "isn't my tankini sexy, honey?" Tisdale also jokingly wrote that Sharpay is not her husband's "type" on her Instagram Story, along with a laughing emoji that seemed to sum up his general reaction to the High School Musical franchise.

Of course, part of the reason that French might not have been on board with Sharpay and her antics is that the musician never watched the High School Musical movies when he was growing up. "Would you have watched this in high school? Be honest," Tisdale asked her husband, to which French responded, "probably not." According to the Illuminate cosmetics founder, French was likely "doing some other crazy stuff" when he was younger, and thus "wasn't cool enough" to understand the magic of High School Musical.

French might not be a HSM fan, but Tisdale still has a great deal of love and affection for the Disney Channel movies. "I think she was perfect for [that] time in my life and that’s why I was even able to play her," she told HollywoodLife in August, adding that she "would never" be able to play Sharpay now. "The best part about Sharpay was that she was unaware of everybody around her, and she was only aware of herself in that moment. I feel like I wouldn’t even be able to go there, but I’ve been honestly searching for a role that’s been just as exciting, because the best part was that she had so much to create."

And, of course, working on High School Musical created a close bond with her costar, Vanessa Hudgens, who remains one of Tisdale's best friends to this day. "She’s the Gabriella to my Sharpay. 16 years ago we met at a sears commercial and the rest is history," Tisdale recently wrote on Instagram as part of a birthday tribute to Hudgens. "She’s truly the only person to understand a large part of my life and I cherish our friendship for that reason."

Tisdale's husband might not be a big fan of Sharpay Evans and the High School Musical franchise, but it's clear that the movie musicals still hold a special place in her heart — and in the hearts of early-aughts Disney fans everywhere.