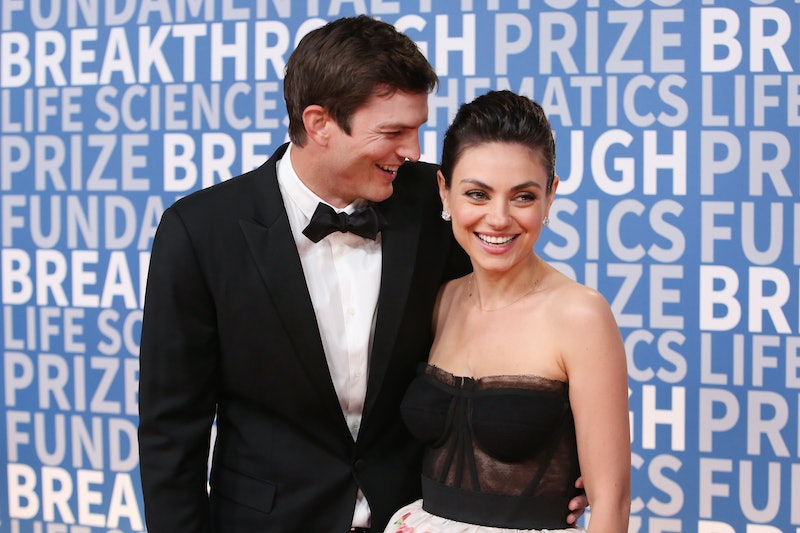 If you know anything about Ashton Kutcher and Mila Kunis, you'd know that the couple typically likes to keep mum when it comes to details about their relationship. But, when In Touch reported a faulty claim that they were breaking up, Ashton Kutcher and Mila Kunis joked about their supposed split on Instagram, according to Buzzfeed. And not only is their video about the bogus claim so fun to watch, but it also shows that the pair have a rock solid relationship.

In the clip, which Kutcher posted on Instagram on June 19, he and his wife can be seen mulling over a photo of an In Touch magazine cover that claims that "it's over" between the former That 70's Show costars. When the Just Married actor asks his partner what's going on, she jokingly replies that "it's over between us" while flashing a photo of the magazine's cover. They go over more of the "details" behind their supposed split, with Kunis saying that she "felt suffocated" and is also surprised to see that she "took the kids." Her husband joked right back, asking, "Oh you took the kids? I don't get the kids anymore?!"

What exactly was behind this (phony) split? Well, as Kunis read, there was reportedly a "very dark secret exposed," but both she and Kutcher were unsure what that was. They ended the clip by smiling at the camera, showing fans that they're definitely not going to let these ridiculous claims get to them.

Kunis and Kutcher have been going strong since 2012. But, prior to becoming "official," the two were giving the whole friends with benefits thing a go, as the Black Swan actor recounted in July 2016. during her appearance on the Howard Stern Show (as obtained via ELLE), she related that, after they both got out of long term relationships (he with Demi Moore and she with Macaulay Culkin), they weren't interested in anything serious. She explained:

Eventually, they came to realize that they did want more. Kunis explained that when she began to become "nervous" that she may lose Kutcher, that was when they began to reevaluate their relationship:

"We both were in agreement. Like, "Yeah, this is just fun. Just fun," shook hands on it, "this is just fun." Three months later, I was like, "This isn't fun anymore." We were always open. We were incredibly open with one another in regard to like where we were with our feelings."

Ever since they did start dating officially, things have been going super well for them. In 2015, Kutcher and Kunis got married, and they have welcomed two children together, Wyatt and Dimitri, per People. And contrary to what some publications might say, there's no sign that the couple are heading towards a split, as they even acknowledged themselves.