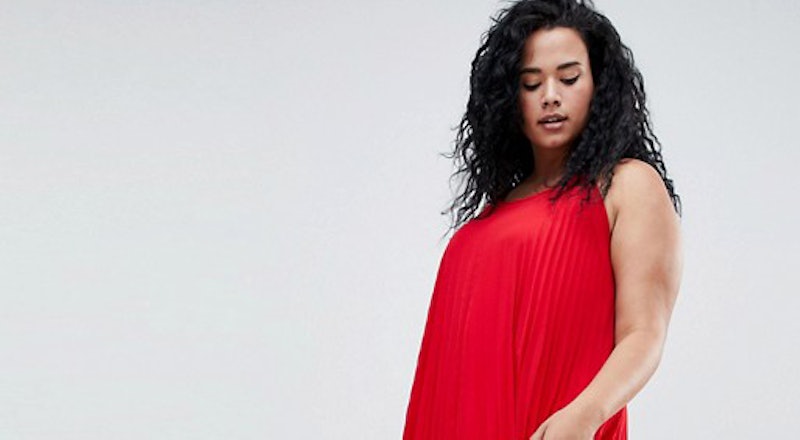 When it comes to the fashion industry, sometimes inclusivity can take a back seat. Thankfully, though, some brands are working toward being much more plus inclusive. One of them is ASOS who did not photoshop a model's back rolls out of an image on their site, and honestly, why should they have?

According to Teen Vogue, plus size blogger and model Callie Thorpe noticed the image online. If you're not familiar with Thorpe's work, you certainly should be. She's the incredible mind who was featured in Vogue and then wrote about her experiences being trolled after her appearance in the glossy. Thorpe is an outspoken body positive activist, and her tweet about the ASOS model caught on with her fans — as it should have.

In the tweet, Thorpe expressed her love of seeing an unedited body writing, "Look at this gorgeous model and her cute back rolls just out here to show women that their bodies are normal and that real life isn’t photoshopped and filtered." Her fans certainly seemed to agree. They quickly began to chime in regarding ASOS's lack of photoshop on the model given that many brands still edit out what they see as "flaws" on some models.

Perhaps the best part, however, is that the model herself spotted Thorpe's shoutout and responded to her. The model from the ASOS image is Natalia Lorenzo who, according to her latest Instagram story, has worked with other brands like BooHoo on their plus size lines and celebrates her body, unedited and with her "tiger stripes" showing. If that sounds like your kind of content, she's also got her own YouTube channel.

Because, yes, all queens and all bodies are beautiful. Praise ASOS!

Fans were quick to show love to ASOS as a brand, as well as Lorenzo.

This isn't the brand's first time having unedited images, though. Back in June 2017, ASOS made the internet smile again by not photoshopping out images of stretch marks on one of their straight size models who was wearing a one piece swimsuit. She wasn't alone. There were other examples of clothing ads that were clearly unedited when it came to so called flaws on their models.

ASOS, however, isn't alone when it comes to letting their photos be. In fact, they're part of several brands who have enacted the policy of no photoshopping.

Back in November, brand Missguided made headlines when they stopped photoshopping stretch marks off of their models. Then, in December, the brand released their Make Your Mark campaign which featured models of diverse body sizes without any sort of retouching done to their bodies. Missguided is also the designer of the dress featured on the ASOS website.

American Eagle's Aerie line is another brand that has ditched the photoshopping, and they've even made it a policy of their brand that there will be none. In an amazing (but maybe not surprising) turn of events, Aerie actually saw their profits rise when they enacted the policy according to Business Insider. May shoppers want to see real bodies, after all.

Thorpe's recognition of ASOS not photoshopping back rolls seems to be something that's appreciated by many based on her Twitter reactions, and brands appear to be catching on. From Aerie to Missguided to CVS and their beauty campaigns, retouching seems to be on its way out, and honestly, it's about time.