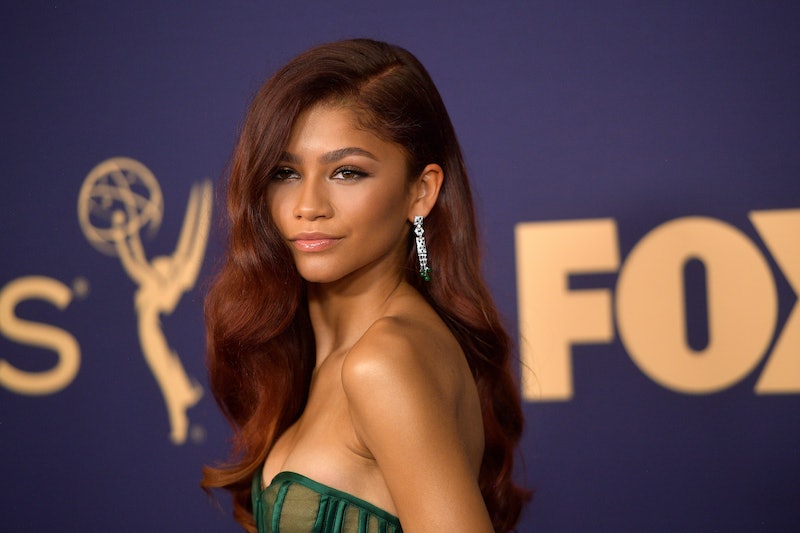 Zendaya is always one to watch at Hollywood red carpets. The singer and Euphoria star regularly makes Best Dressed lists and can be counted on to wear something unforgettable. This Sunday night was no different: Zendaya's 2019 Emmys dress was a custom Vera Wang design that featured a green corset silhouette. But her overall look was even more memorable because she brought back her red-tinted hair.

Since Zendaya often wears snazzy suits — like the gray ensemble she rocked at NYFW, which was the same exact style that actor Michael B. Jordan wore to an Academy Awards party earlier this year — fashion followers were basically expecting her to wear a two-piece look at the Emmys. Zendaya, who was scheduled to present at the ceremony, instead opted for a frock that boasted a strapless, boned bodice and a satin skirt with a serious slit.

The Spider-Man actor accessorized her outfit with crystal drop earrings, a blingy wrist cuff, and matching green heels. She ditched necklaces in favor of a bare neck, which was framed by a tumble of crimson-kissed waves. Zendaya loves to keep her fans guessing about how she will style her gorgeous curly hair when she makes an appearance. She has been known to show up at events with waves, mullets, or bowl cuts. For the Emmys this year, she was all about those full and side-parted red waves. According to oVertone, she actually didn't dye her hair for the evening, but rather used their Copper Conditioner Kit to deposit some color.

Another much-anticipated element of Zendaya's 2019 Emmys look was her makeup. The dramatic makeup of Euphoria characters is grabbing all sorts of headlines — namely the unconventional eye and lip looks. "There's subliminal emotional messages always in the makeup," the show's head artist Doniella Davy told Allure.

However, for the Emmys, Zendaya opted to save all of the drama for her dress. She kept her makeup somewhat simple, going with smoky eyes, major lashes, and glossy, pink lips. Ultimately, it was such a cohesive look.

Zendaya and her longtime stylist Law Roach have worked to cultivate quite a signature style for the star. Zendaya's most memorable looks from 2019 prove that her signature is to wear whatever she wishes. Her magical Met Gala outfit was her interpretation of Cinderella's ball gown. The ethereal, sheer blue ensemble by Tommy Hilfiger lit up the red carpet — literally.

At the Spider-Man: Far From Home premiere in June, Zendaya sparkled in a sequined and backless Armani Prive dress. It looked like liquid and was a perfect match for her red strands.

She rocked a hot pink, chiffon gown by Ralph & Russo at another Spider-Man premiere this summer and it was a mood. The details — the choker, the slit, the cape, and the train — added extra oomph.

Zendaya loves a good suit, as demonstrated by this matchy matchy charcoal ensemble by Berluti. The actor wore this look at the Harper's BAZAAR ICONS party in September 2019.

She even designed a burgundy velvet pantsuit for last Hilfiger collection and served up a coordinated lewk.

Zendaya's 2019 Emmys ensemble was yet another red carpet and red-haired win for one of the most fashionable stars of her generation.

More like this
30 Of Kendall Jenner’s Best Runway Looks To Date
By Dominique Norman
Looking Back At Kylie Jenner's Best Fashion Week Looks
By Allie Fasanella
All Of Doja Cat’s Wildest Paris Couture Week Looks
By Dominique Norman
Hailey Bieber Looks Just Like Princess Diana & I Need To Copy Her ASAP
By Sophie McEvoy
Get Even More From Bustle — Sign Up For The Newsletter
From hair trends to relationship advice, our daily newsletter has everything you need to sound like a person who’s on TikTok, even if you aren’t.