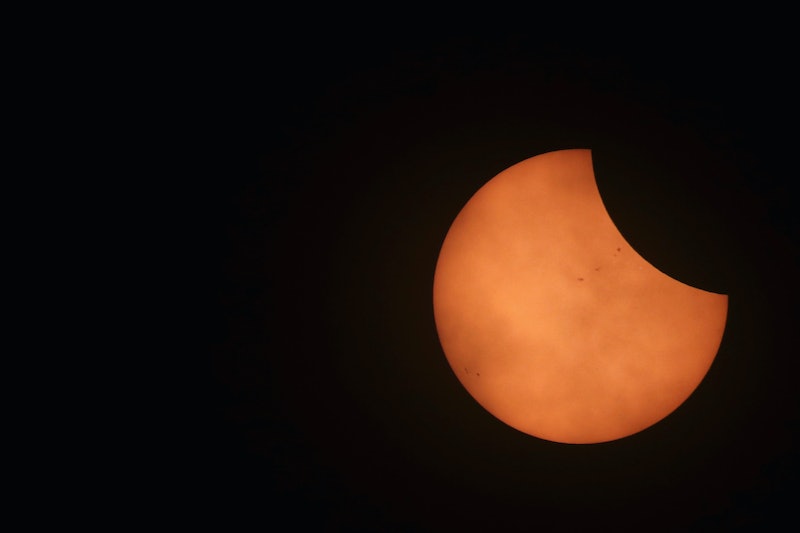 This summer’s confluence of astrological influences has been nothing short of a bumpy ride, to say the least. And if you thought eclipse season was over and done with, not so fast — we’ve got one more to go, folks. The August 2018 solar eclipse will be upon us soon, and astrological predictions say that it’s set to be a powerful time. According to Astrology King, this partial solar eclipse in Leo will emphasize “thinking, contemplation, deliberation, discussion, and debate,” and may highlight disagreements and power struggles, as well as tensions surrounding certain relationship dynamics.

On August 11, this final partial eclipse of the current cycle will bookend a powerfully transformative season. According to Elite Daily, eclipses denote major meaning, and can signal personal transformation, upheaval, and a total reconfiguration of who we thought we were. In short, by getting on board with all the changes afoot, and releasing any residual fears and resistance to said changes, we’re set up for more complete self-actualization, to whatever degree we’re ready for it. (And that goes double for you, Leo, since this partial solar eclipse is happening in your sign.) And even if we’re not ready, or don’t feel like we are, change happens anyway — so it’s best to get on the proverbial bus, and see where the road takes you. And with a partial solar eclipse in Leo set to happen (during Mercury Retrograde, no less!), the astrological forecast emphasizes self-care, self-expression, and releasing all forms of identity, both internal or external, that may be holding you back from realizing what matters most to you.

Mythic Zodiac notes that the August 2018 solar eclipse is conjunct with Mercury and square with Jupiter, which can emphasize tendencies towards excess — especially in the realms of communication. Cancer and Scorpio, this partial solar eclipse will impact the financial and career sectors of your life, according to Elite Daily, so be extra mindful that you're saying everything you need to say during this time. This is a period when it’s easy to overreact and overextend, so be careful not to commit to things you can’t actually follow through on, and be extra mindful of communication. This goes extra for Aquarius, Capricorn, Libra, and Gemini, who all will embark on journeys involving their relationships with others during this eclipse, according to Elite Daily. And while always a good rule of thumb, this is an especially good time to think before you speak — and take a few extra deep breaths before reacting if conflicts arise.

Remember that eclipses are all about overturning the status quo, so if rolling with the punches is not your forte, eclipses can help you relinquish that urge to hold on when it’s time to let go. And change can be a super exciting thing — this is the perfect time to release the old, and allow for renewal in key areas of your life. If you're an Aries, Taurus, Leo, Virgo, Sag, or Pisces, your experience with this partial solar eclipse will focus on your inner adventures, Elite Daily reported, and that includes figuring out what needs to change or stay the same. And while change can be uncomfortable and definitely nerve-wracking at times, the new stuff that waits on the other side of that process can be amazing.

Astrology King suggests that solar eclipses are all about options — with so many possibilities on the table, it’s a powerful time to get focused on what you really want. By examining habits that may have you stuck in a rut, and reframing any mental patterns that have you running less-than-productive loops round in your head, you can position yourself to make a major leap forward during this period. And with the new moon capping off this current cycle of eclipses, this is a major opportunity to shed some baggage, reinvent your personal narrative, and set up your most cherished goals for the future.