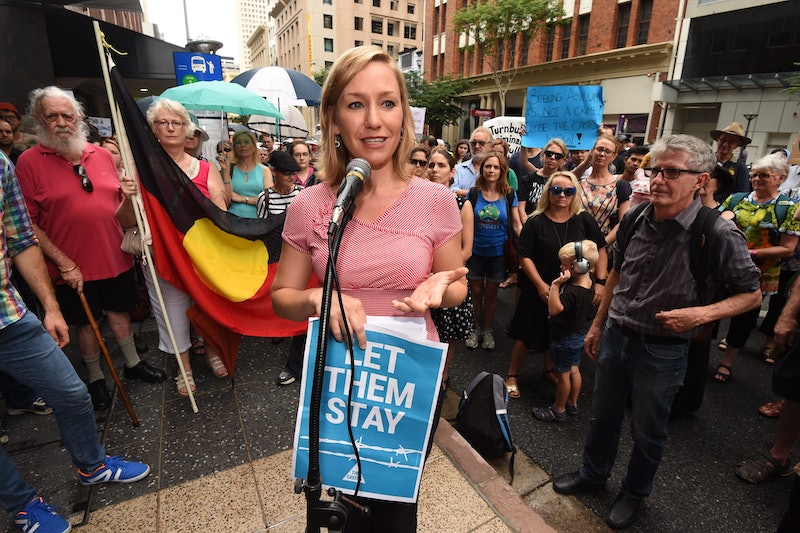 Dan Peled/Epa/REX/Shutterstock
By Alex Gladu
May 9, 2017

There's a feminist saying that goes "The personal is political." While it's true that personal experiences can be deeply impacted by political norms — and vice versa — the saying has perhaps never been more obvious than Tuesday's session in the Australian Senate. Sen. Larissa Waters breastfed her baby in Australia's Parliament, and marked the occasion with an important message for her country.

According to PerthNow, Waters gave birth to her second daugther, Alia Joy, earlier this year. Tuesday was Waters' first day back in the senate since giving birth, but she didn't show up to work alone. Alia came with her, and became the first baby to be breastfed on the floor of the senate chamber. The feeding reportedly took place during a vote on a motion from Waters' Greens party.

In the senate, Waters is part of her party's leadership. According to her Twitter bio, she serves as the Greens' co-deputy leader, representing Queensland in Parliament. Like the U.S. version, the Greens Party represents environmental interests, but members are also passionate about standing up "always for what's right." On Tuesday, Waters stood up for women in a big, public way, as she brought Alia to the floor of the Senate. She even sent out a celebratory tweet, calling for more women in Parliament.

Although Waters was the first senator to use it, Australian law has allowed women to breastfeed in Parliament since last year. In February of 2016, the Australian Parliament changed its rules to allow breastfeeding female senators to bring their children to the lawmaking floor, calling the policy change "family friendly." Currently, of the 226 members of the Australian parliament, about a third — 75, to be specific — are women.

As it turns out, the Senate floor may not have been Alia's first public appearance with her mother. According to a tweet from one of Waters' fellow Greens, the senator last week took her infant daughter to a public discussion about the housing market. Also last week, Waters herself tweeted about doing a radio interview while breastfeeding.

Waters' historic moment in the Senate on Tuesday was also celebrated by women online around the world. In some countries, the news may not be as shocking. For instance, an Icelandic lawmaker breastfed her own baby during an address to Parliament last October. Before that, a Spanish member of Parliament breastfed her infant son at work in January of 2016. On Tuesday, Alia's feeding was yet another step in the right direction for working women around the world.