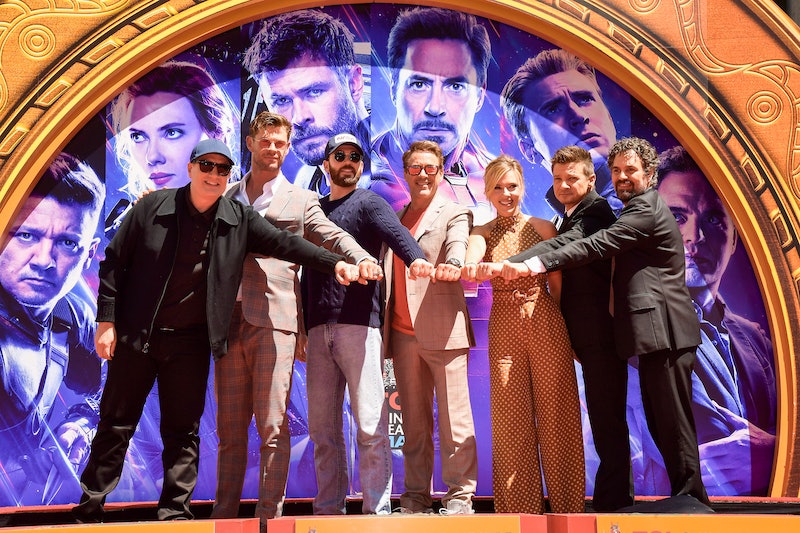 If you can't stop thinking, talking, or obsessing about Avengers: Endgame, you're not alone. The weekend box office haul for the highly anticipated movie is in —and the hype did not disappoint. Avengers: Endgame made box office history in the weekend after its April 26 release in the U.S. The movie earned $1.2 billion in its global debut, which makes it the first film in history to make more than a billion dollars in its opening weekend. That is a lot of Marvel fans' tears for one weekend.

As it turns out, Endgame was in competition with its predecessor for box office records. Endgame reached the billion-dollar mark in only five days, while Avengers: Infinity War made a billion in 11 days. (Way to slack, Infinity War.) Broken down, $350 million of the gross was made domestically, while $859 million came internationally. The film's directors, Anthony and Joe Russo, released a statement in reaction to the news:

"We poured our heart and soul into 'Avengers: Endgame,' hoping to tell a story that would inspire audiences around the world. Our family of cast and crew felt honored to be entrusted with bringing the Infinity Saga to a close. To Kevin Feige, everyone at Disney and Marvel, and the incredible, global community of fans – thank you."

In addition to setting domestic and international records, the movie was a hit with critics and audiences alike. It earned a 96% Fresh rating on RottenTomatoes and an A+ Cinemascore, signaling a unity among fans and the film community. Avengers: Endgame is the end of an era for the Marvel Cinematic Universe and the 22nd film released by the studio as it has followed the adventures of Iron Man, Captain America, Thor, and Black Widow through the years.

Alan Horn, Chairman of Walt Disney Studios, also expressed his gratitude for the film's success by releasing a statement that said, in part, "Though 'Endgame' is far from an end for the Marvel Cinematic Universe, these first 22 films constitute a sprawling achievement, and this weekend's monumental success is a testament to the world they've envisioned, the talent involved, and their collective passion, matched by the irrepressible enthusiasm of fans around the world."

Meanwhile, Kevin Feige, President of Marvel Studios, got nostalgic for the humble beginnings of the MCU back in 2008 while reflecting on the monumental achievement that is Avengers: Endgame.

"From the very beginning with Iron Man, all we've wanted to do was tell stories that brought these characters to life onscreen the way we've experienced them as fans of the comics," Feige said in an official statement. "That we've had so many other successes in this journey leading to this unbelievable result with 'Avengers: Endgame' has been almost entirely due to the fans around the world who have supported us through it all."

Fans who've had the chance to see the film (and judging from these numbers that's all but two lost souls) are having all kinds of mixed emotions about Endgame. While the movie has received universal acclaim for its epic nature, it's always hard to close a chapter. Spider-Man: Far From Home, the ball's in your court. I have a feeling the only other MCU release in 2019 will be making a few coins too.