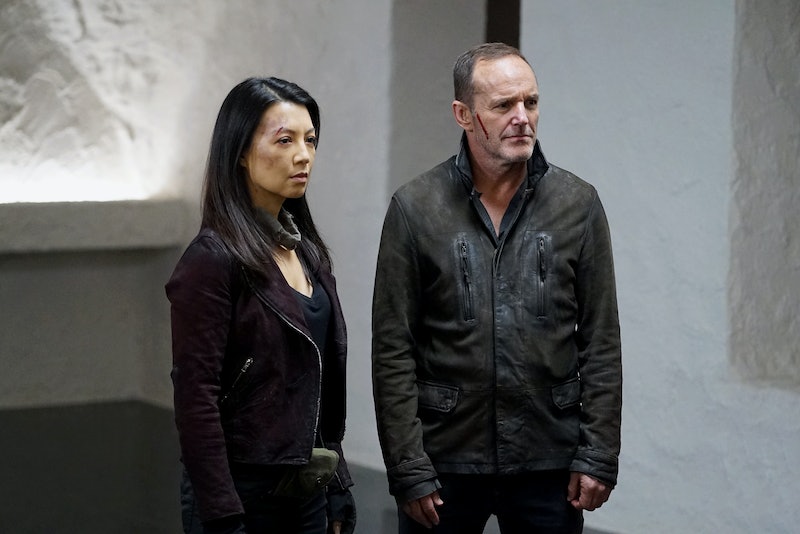 It's been almost six years since Loki killed Agent Phil Coulson, only for him to be reborn on Agents of S.H.I.E.L.D. The ABC series has often dipped its toes into the Marvel Cinematic Universe, while introducing new characters from the comics — and you may have heard that another big team-up is on the horizon. It might be time to start looking for Avengers: Infinity War Easter eggs on Agents of S.H.I.E.L.D. — even if they're the tiniest of Marvel hat tips.

Since Avengers: Age of Ultron, the plot and character crossovers with Agents of S.H.I.E.L.D. and other films in the Marvel Cinematic Universe have lessened. Both the individual members of the superhero team and the secret agents have gone their own ways. Presumably, Maria Hill (Cobie Smulders) works at the Avengers facility now. She was one of the only remaining ties between the films and the television series.

As a matter of fact, the S.H.I.E.L.D. organization has been in limbo for the past couple of seasons, as well, and virtually unseen on the big screen since rescuing the floating Sokovia in Avengers: Age of Ultron. Not that the existence of S.H.I.E.L.D. has ever stopped Coulson, May, and their crew. As Daisy said in a recent episode, just like Asgard is a people not a planet, S.H.I.E.L.D. is Coulson, not a group. In Agents of S.H.I.E.L.D. Season 4, Life Model Decoys infiltrated the system and after the new director was assassinated, S.H.I.E.L.D. was dissolved yet again.

The end of the 100th episode saw a quinjet arrive with enough dedicated people to rebuild S.H.I.E.L.D. — maybe by the time Infinity War is released. Speaking of time crunches, this season on Agents of S.H.I.E.L.D., the team is trying to stop the planet from literally breaking in half. They need to figure that out fast, because Thanos is on his way. Could it be that the rift was caused by Thanos?

We likely won't see any characters from S.H.I.E.L.D., the Defenders universe, or Runaways team up against Thanos, either. In an Italian interview translated by CinemaBlend, Joe Russo (who directed Infinity War with his brother Anthony) said this about the expanse of the universe and whether or not they'd ever include these small screen characters:

The Marvel Universe is sprawling — the Marvel Cinematic Universe is enormous. Just think of all the characters that haven't been introduced yet that are going to be introduced by the time that we're working on Infinity War. We have a tough task just telling the stories of the characters who exist [on the big screen] in the Marvel Cinematic Universe, let alone adding the entire Marvel Television universe. … Anything is possible in the Marvel Universe. It's certainly something we're considering. But our focus is on telling the stories of the characters that currently exist on the movie side.

In a recent interview with CinemaBlend, head of Marvel Television Jeff Loeb did hint at something coming up with Coulson himself related the movie franchise. On the subject of the character reuniting with the Avengers, or at least shooting them a quick text to let them know he's alive, Loeb said, "It's certainly something that will get resolved, and it may get resolved in a very surprising way."

In the same interview, actor Clark Gregg insinuated that he hadn't gotten the call to head down to Atlanta just yet — so maybe this resolution will happen on S.H.I.E.L.D. rather than in an upcoming Avengers movie.

At the very least, it seems likely that the show will mention the existence of Wakanda, now that the agents are back on Planet Earth and the Black Panther nation has made itself public. Or, now that the series has fully immersed itself in Kree culture, some Captain Marvel references may be on the intergalactic horizon.

In the 100th episode, J. August Richard's character from the pilot, Mike Peterson (pre-Deathlok), tried to convince Coulson that he was still on the table at the end of the first Avengers movie, recovering from Loki's stab wound. It hard to watch, but also a nice reminder of how this show came to be. Future crossovers may not be as epic as the Hydra takeover post-Captain America: Winter Soldier, but it's always fun to see how this universe operates in different mediums, and April 27's Infinity War should be no different.

More like this
The First 'Percy Jackson & The Olympians' Teaser Comes With An Ominous Warning
By Grace Wehniainen
Nicola Coughlan Shared A Lady Whistledown Excerpt From ‘Bridgerton’ Season 3
By Grace Wehniainen, Alyssa Lapid and Sam Ramsden
A New 'And Just Like That' Table Read Pic Confirms A Key Character's Return
By Jack Irvin and Grace Wehniainen
You’ll Definitely Recognise Both Of Ty Tennant’s Parents
By Maxine Harrison
Get Even More From Bustle — Sign Up For The Newsletter