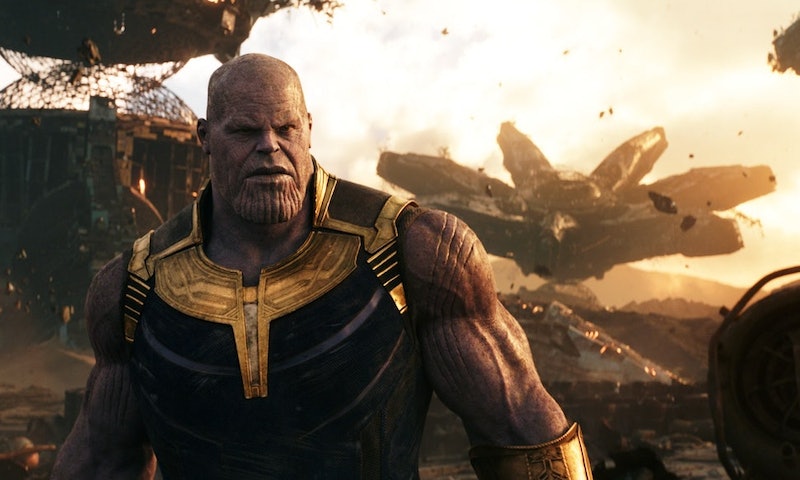 The holiday season is about to get just a little bit brighter for Marvel fans. Netflix announced on Monday, Nov. 19 that Avengers: Infinity War is coming to Netflix on December 25 aka Christmas Day. So forget all of the plans you previously had scheduled with family and friends, because Thanos is here to crush your holiday itinerary to dust. (Sorry, too soon?) Just leave it to Netflix to up its yuletide streaming game with a snap of its fingers.

Of course, this wouldn't be the first Marvel movie to make its way to the streaming platform. Not by a long shot, in fact. Thor: Ragnarok, Doctor Strange, and Black Panther all became available on Netflix over the last few months, so the fact that this summer's Avengers installment will be the latest addition to the collection isn't all that surprising, but it's still enough to keep die hard fans merry all year long. In actuality, it's the perfect move on Marvel's part. Because what better way to keep people excited for Avengers 4 than by reminding us about the major cliffhanger Infinity War delivered? 2019 can't get here soon enough since it brings us one step closer to finally getting some answers in the aftermath of Thanos' actions. Warning: major movie spoilers ahead!

For those select few out there who have yet to watch the movie but are still interested in this post, let's map out where exactly we left off with our beloved superheroes as they all joined forces to bring Thanos down and save the universe. After successfully collecting all six infinity stones — the Space Stone, the Reality Stone, the Power Stone, the Mind Stone, the Time Stone, and the Soul Stone — Thanos used the power of his gauntlet to snap his fingers and wipe out half of the people in the universe. This meant that several of the movie's main heroes disintegrated into a pile of dust, including Bucky, Groot, Mantis, Drax, T'Challa, Peter Quill, Peter Parker, Doctor Strange, and the Scarlet Witch. Just to name a few.

This was obviously a huge moment that left many viewers stunned. Did the franchise really just wipe out so many pivotal characters? Odds are, at least some of those deaths will be able to be undone, thanks to the mere existence of the Time Stone, which allows the user to go back in time. It's unclear how it'll all play out in the end, but considering that Nick Fury used his last remaining moments before he too bit the dust (pun intended) to send a message to Captain Marvel, it's safe to assume she'll have a vital role in making it all come to pass. However, we'll have to wait until Avengers 4 comes out to know for sure.

But in the meantime, we can rewatch the madness happen all over again and marvel at the fact that so many lives currently hang in the balance in the MCU. And honestly, can you think of a better way to spend Christmas Day?