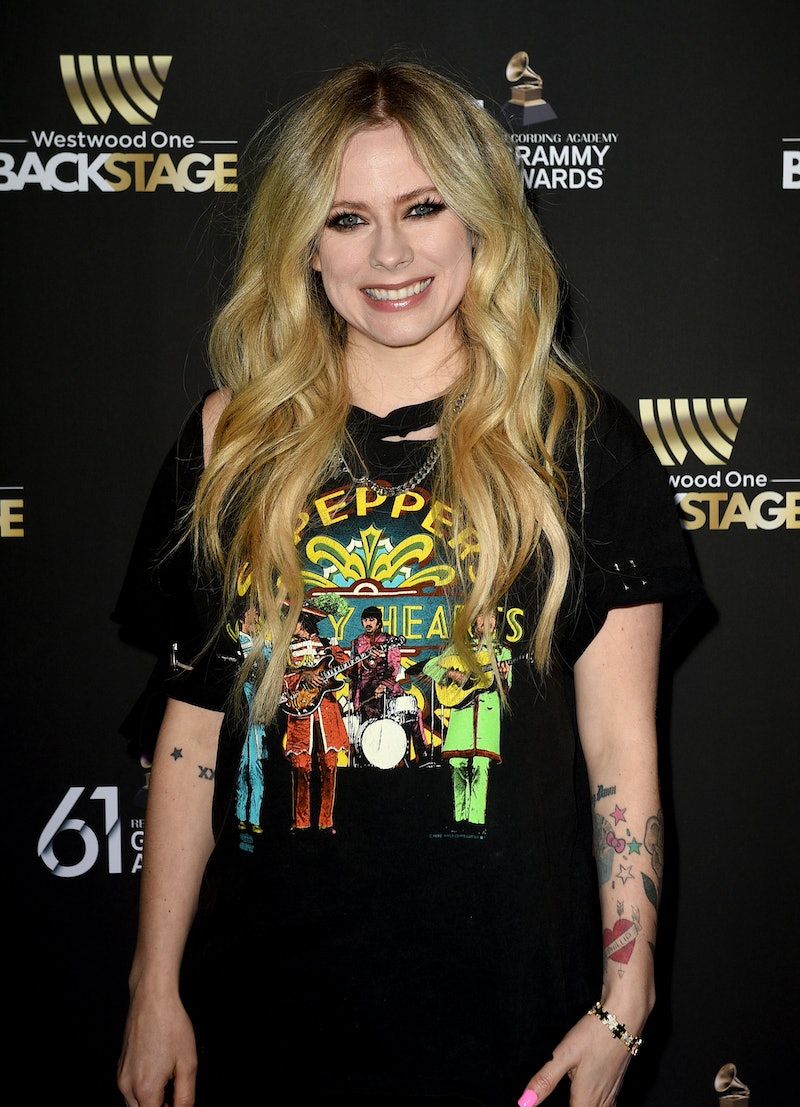 He was a sk8ter boi, but for the record, she's no dumb blonde. Avril Lavigne's "Dumb Blonde" featuring Nicki Minaj is a female empowerment anthem for all the blondes out there, and for anyone else who has ever felt underestimated or stereotyped. And while at first these two artists might seem like an odd pairing, fans also shouldn't underestimate Lavigne and Minaj's love for one another. Seriously, their Twitter love fest might make you appreciate the message behind Lavigne's new single off her upcoming album, Head Above Water, out Feb. 15, even more.

In the song's opening lines, Lavigne makes a few things clear, "I am no dumb blonde/ I am no stupid Barbie doll." For those who think she is, though, she'd like them to sit back, relax, and watch as she proves them wrong. The follow-up to her first single in five years, the titular ballad "Head Above Water," is a kiss-off to mansplainers, arrogant know-it-alls, and probably anyone who believed those crazy Avril doppelgänger rumors.

Yes, Lavigne is alive and well on this new track, which is reminiscent of Gwen Stefani's 2004 hit "Hollaback Girl" and Lavigne's own "Girlfriend." She's also a babe, a boss, and she's making that money, OK? That's why it feels only right that queen of the Barbz Minaj got a feature on this track to let the haters know that she's got Lavigne's back. Oh, and that the two are here to raise a little hell. As Minaj makes clear on the track, "you never gonna stop me/ never gonna top me."

After dropping the track, Lavigne explained on Twitter why it was the "legendary" Minaj she wanted on this new track that has a special place in her heart. "Nicki is such a talented, strong woman and driving force," she tweeted before sharing her favorite Nicki Minaj tracks with her followers. "I listen to Fly, Starships and Bed all the time," she added. "Having her on the song is so special to me."

In her next tweet, Lavigne expanded on the track. "We wrote Dumb Blonde as an anthem for anyone who has been stereotyped or talked down to," she wrote. "Keep your confidence up and don’t let anyone tell you how to be."

It's a powerful message from two artists who have never let others define them. But, funnily enough, Lavigne might have had some influence on Minaj way before the two ever dreamed of collaborating. Before the track was released, the rapper tweeted her own sweet ode to the "Complicated" singer. "I used to drive to my job @ Red Lobster playing this woman’s album for an hour straight everyday for months," Minaj wrote. "Crying to 'I’m with you', blasting 'complicated' 'things I’ll never say' 'nobody’s fool' 'sk8er boi'." She then added, "This woman is so unbelievably talented."

After being diagnosed with Lyme disease four years ago, Lavigne has spent time away from the spotlight to focus on her health. Back in September, Lavigne said she wrote and recorded a lot of her new album, her first since her 2013 self-titled release, in her bed and on her couch while battling the tick-borne illness, which left her bed-ridden for five months. So, it's definitely good to see her not only come back with new music, but with such a fun collaboration.

Lavigne is officially back and ready to get back to what she does best. Adding Minaj to the mix just makes her comeback that much sweeter.