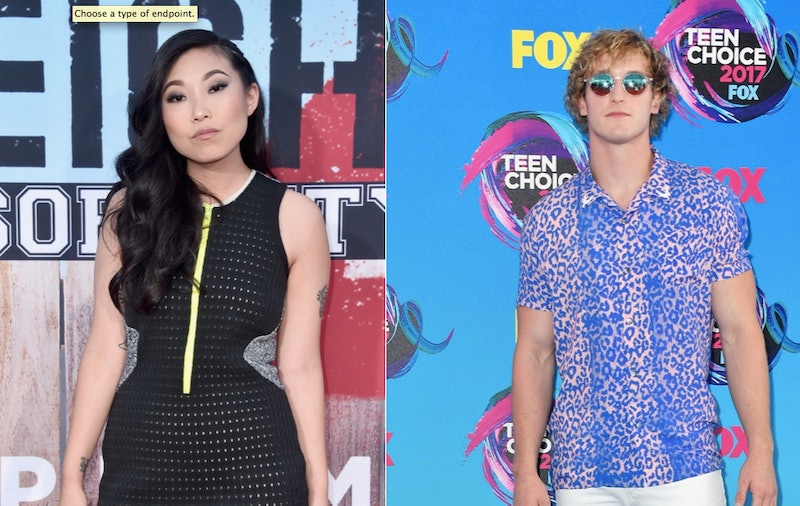 When it comes to all things markedly not OK, Awkwafina certainly doesn't mince words. So, after YouTube superstar Logan Paul posted a video featuring images of what appeared to be a dead body hanging from a tree in a Japanese forest known for its high incidents of suicide, the rapper-comedian took to Twitter with her thoughts on the 22-year-old internet sensation. And, basically, Awkwafina's Logan Paul comments boil down to this: In a hypothetical world, she'd really like to drop kick him.

Amid the mixed bag of celebrity responses to Paul's video — which had already gleaned millions of views when he took it down — Awkwafina (whose given name is Nora Lum) penned a now-viral series of tweets on Jan. 3 expressing her overall distaste for Paul and his behaviors. Of course, to do that, she infused a bit of her characteristically spitfire rhetorical flair. (For those unfamiliar with the tongue-in-cheek verbal gymnastics that launched Awkwafina's career, the spunky rapper certainly has a way with words.)

"If I died and Logan Paul was the first person to find my body and video tape it out of a desperate attempt to stay relevant after Vine died w his career," Awkwafina wrote, kicking off the first installment of what evolved into a three-part tweet series, "I would ask God for a 15-minute day pass to come back [and] drop kick him in the throat."

The rapper quickly corrected herself in an addendum to her original tweet about an hour later. In the auxiliary edit, Awkwafina explained that, upon further research, she learned that Paul (who rose to fame in 2013 as a vlogger on the now-fallen social video app Vine) didn't actually kiss his career goodbye along with the video service that gave him his start.

And she's not totally wrong: post-Vine, Paul lent his name to several big-league advertising campaigns, hammered out the beginnings of a Hollywood acting career, and rapidly ascended the ranks of YouTube's megastars with an absurdly successful channel that now touts some 15 million subscribers.

But, contrary to Awkwafina's claims, Paul insisted that he "didn't do it for views." He posted an "I'm sorry" note on Twitter in the midst of the controversial video's immediate surge of public backlash, and followed up with (of course) a regretful video apology on YouTube Jan. 2, which he aptly titled "So Sorry." The video already has 16 million views and counting.

The scope of Paul's massive digital reach is part of the reason why his World Wide Web-sized blunder was such a big deal to so many people. After publishing a video earlier this week that included grotesquely tactless footage of what seemed to be a deceased person's body hanging from a tree in the thick of Japan's infamously dense Aokigahara forest (more colloquially referred to as the Sea of Trees; and with good reason, given its sprawling square footage), situated along the northwestern border of Mount Fuji.

The forest has risen to notoriety as a site for eerily rampant instances of suicide — a harrowing pattern that has rendered it something of a spooky pop cultural specimen (see: its various cinematic renditions, including 2015's Sea of Trees and 2016's horror flick, The Forest) and earned Aokigahara its gaudy nickname "suicide forest." The ways in which an objective tragedy like suicide (especially in this uniquely horrifying, chronic type of iteration) could be warped and sensationalized in the name of westernized "entertainment value" was already considered offensive and disrespectful by many.

In the third and final installment of her pungent Twitter commentary, Awkwafina seems to have pretty adequately summed up what a lot of people probably wish they could say to Paul right now. "Don't enter a suicide forest in a foreign country with a camera, hoping that you'll find a dead body," she wrote. "Suicide is not monetized content."

Because, no matter which way you spin it, capitalizing off a far-away tragedy for entertainment's sake is really pretty heinous. And it probably shouldn't require a massive cyber-firestorm for a fully grown, 22-year-old man to know that.