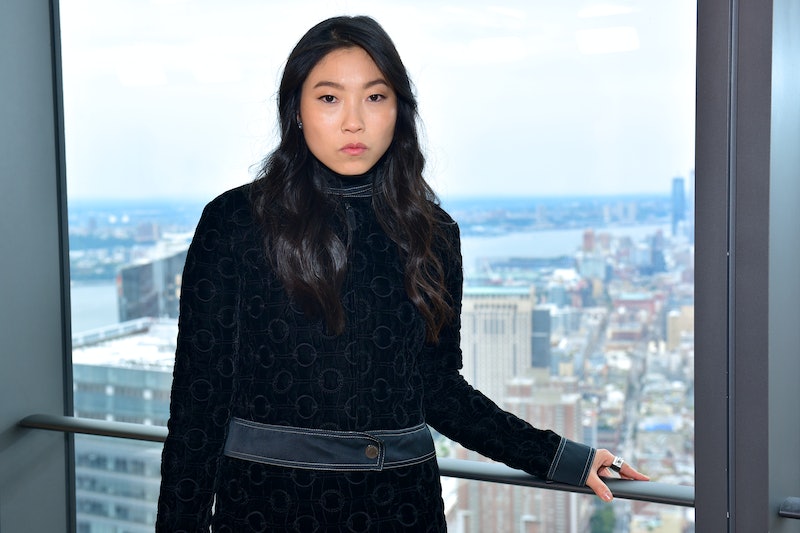 Before kicking off her SNL hosting gig, Awkwafina took the opportunity to give a heartfelt story about the 18-year gap between Lucy Liu's SNL hosting gig and Awkwafina's own. The two of them are the only Asian women to have ever hosted the show in its 44-year history, and Awkwafina's Lucy Liu shoutout on SNL is a perfect example of why representation matters on shows like SNL.

After some jokes about her New York upbringing, Awkwafina turned dropped the comedy to tell an emotional story about an SNL-related memory from her childhood "Back in 2000, I came to 30 Rock and waited outside when my idol, Lucy Liu, hosted SNL." After an applause break, Awkwafina told the crowd "I was a a kid and I didn't have a ticket so I knew I wasn't getting in, but I just wanted to be near the building. And I remember how important that episode was for me and how it totally changed what I thought was possible for an Asian-American woman."

Awkwafina closed her monologue by declaring that "Standing here tonight is a dream I never thought would come true. So thank you, Lucy, for opening the door. I wasn't able to make it in the building back then, but 18 years later I'm hosting the show." Awkwafina's story was a touching tribute to the impact of Liu on American culture, and an emotional reminder that media representation has real power and a real impact on people who don't often get to see people with similar backgrounds on television.

Awkwafina's popularity skyrocketed in 2018 thanks to her involvement in films like Crazy Rich Asians and Ocean's 8, and having breakout roles in two of the year's biggest blockbusters is a surefire way to end up hosting an SNL gig, but it seems that being a breakout film star has been the only way for Asian women to be granted the opportunity to host SNL. In addition to the 18-year gap between her and Lucy Liu's hosting gig, SNL itself has only had three Asian men host the show — Jackie Chan, Kumail Nanjiani, and Aziz Ansari — which adds up to only 5 hosts of Asian descent, one for about every seven years of the show's 44-year existence.

However, Awkafina's presence on the show may change that. While it hopefully won't be another 18 years before another Asian women hosts the show, Awkafina's presence is likely just as inspiring to Asian women in America, and around the world. Just Awkwafina said that Lucy Liu "totally changed what I thought was possible for an Asian-American woman," Awkwafina is doing the same thing in 2018. While her sketches throughout the night showed the star getting silly, getting inappropriate with pumpkins, and doing goofy dances to various game show theme songs, there was nothing silly about the impact that Awkwafina's appearance on the show could have on the show's future and the future of Asian women in the entertainment industry as a whole.