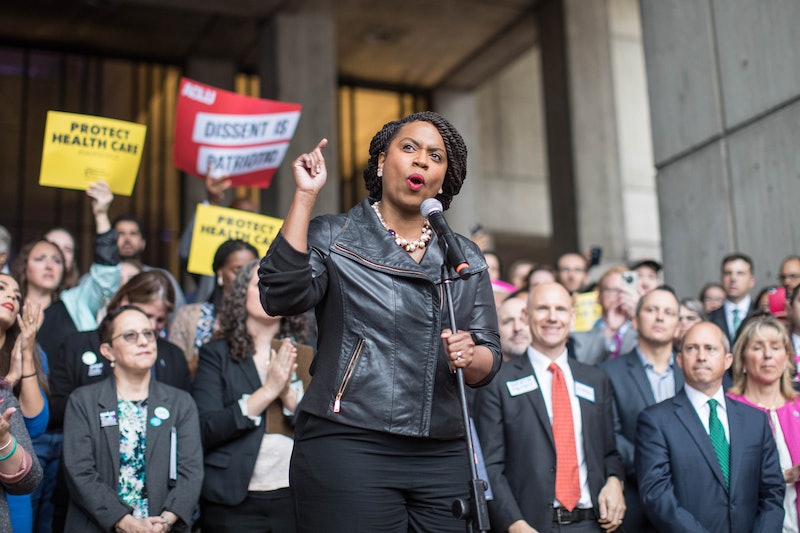 The 116th Congress will be taking its seats for the first time Thursday morning, and its freshman class is the most diverse ever to take office. Ayanna Pressley's New Year tweet summed up the anticipation of that milestone with an iconic song mashup.

"Siri cue #TheCarters 'I can't believe we made it.This is what we're thankful for.' & remix it with #SamCooke 'Change is gonna come,'" she wrote on Jan. 1. The imaginary remix of course references lyrics from Beyoncé and Jay-Z's 2018 hit "APES**T," released under the name The Carters, and Sam Cooke's 1964 soul classic, "A Change Is Gonna Come." Pressley also added a photo of the plaque outside her new congressional office.

This past November, Pressley defeated Democrat Rep. Mike Capuano to represent President John F. Kennedy's former district, encompassing part of Boston and its suburbs. Capuano served 10 terms before losing to Pressley, and by all measures had a perfect progressive voting record, according to NBC News. But despite that record, Pressley argued during the campaign, Capuano belonged to an older, whiter version of the Democratic Party that doesn't accurately represent its supporters anymore.

"It's not just good enough to see the Democrats back in power. It matters who those Democrats are," Pressley told supporters, according to NBC News. "While our president is a racist, misogynistic, truly empathy-bankrupt man, the conditions which have made the 7th C.D. one of the most unequal in America were cemented through policies made long before he ever descended the escalator at Trump Tower."

After defeating Capuano in the Democratic primaries in September, Pressley was guaranteed her seat, running unopposed in the general election in November. "Activists and agitators have brought us to this very moment," Pressley told a crowd of her supporters on the night of her Nov. 6 election. Paraphrasing Cooke's lyrics she continued, "None of us ran to make history. We ran to make change … and change is on the way."

Pressley's ambitions for her first term in office appear to be rooted in the diversity she is helping bring to Congress. "I choose to step in to 2019 committed to not only partnering with the diverse coalition of community leaders that mobilized this year to resist and progress, but I commit to expanding that coalition. We cannot make assumptions about who wants a stake in their government," she wrote in a Jan. 1 op-ed in The Boston Herald. "That means working with anyone who wants to partner in the name of progress but never compromising our values. When the stakes are so high, we must be bold, innovative and steadfast."